William, Kate & Harry did their very own #OkToSay video

Well now we know why Kate Middleton was wearing a mic on Wednesday, because she was filming a video with Prince William and Prince Harry. The trio filmed their very own #OkToSay video for Heads Together. 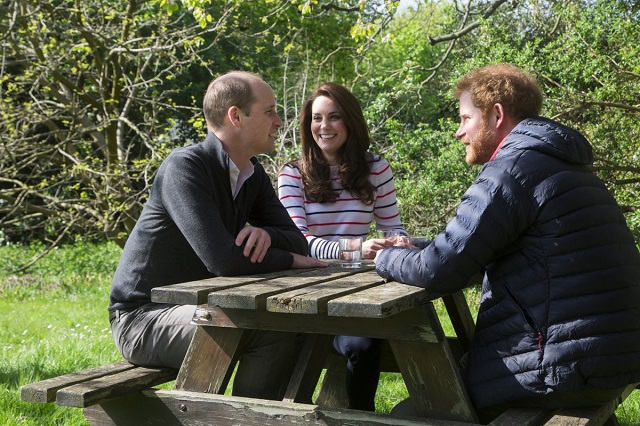 In the nearly 7-minute long video, William, Kate, and Harry sit outside KP on a picnic table and have a conversation about why they chose to focus on mental health and create Heads Together. Kate spoke about struggling after George was born, while William spoke about dealing with air ambulance pressures and Harry spoke about not dealing with his mother’s death until recently. I’ve transcribed the conversation in full below, the video is at the end of the post.

Harry: “Why Heads Together and why mental health?”

William: “It was your idea, I think.”

Kate: “Because it’s a common thread, wasn’t it, mental health sort of seemed to run between all the different areas we were working in, so whether it’s homelessness, military with yourself, and addiction with me and bereavement. There’s a sort of underlying thread, wasn’t there, of mental health. And this idea that all of us coming together to find a common theme. And to show people how to have those what we’re calling sort of simple conversations, and starting those conversations, which is often the hardest bit really.”

Kate: “Yeah. But it was a young mother actually who said that to me at the Anna Freud Centre, she said actually just talking to somebody, having those conversations, is like medicine for her. And that is the point is that actually it’s okay to have that conversation even if it’s uncomfortable or awkward but it’s just starting it.”

William: “But the pressures on children nowadays I think are more than they ever were for us as well, I know each generation can say that, but you’ve got so many things to worry about now, whether you’re struggling for exams, whether you’re struggling with home life, struggling with friends, and then you have the social media angle, you can understand why that, coupled with the fact that you don’t get out of the house because you’re staring at the screen the whole time, there’s got to be a lot of issues that are going to build from that if you’re not careful and managed.”

Harry: “And it’s always sold as if everybody else’s life is perfect, that’s the problem, and therefore you think if everyone else’s life is perfect, there must be something wrong with me. But if you can have a family environment where you can talk openly about your issues, that makes for a better family, better preparation, probably working better at your job, doing better at school, it just goes on and on and on.”

Kate: “Because you often speak don’t you about the emotional changed that even you’ve gone through and I think a lot of parents hopefully can I suppose identify with that in that you know having a child, particularly your first child, is such a sort of life changing moment, nothing can really prepare you for that. I remember the first few days with little George, you know you have no idea really what you’re doing no matter how many books you read, nothing can prepare you for it.”

William: “There’s no rule book, there’s no training that teaches you how to do it, you’ve just got to learn from previous generations and hope that you can translate it into what you know what you want to do.”

Kate: “Do you remember up in Anglesey, so we’d had our couple of weeks of sort of family support and then you were keen to get back to your work and I was like ‘No, I’ll come with you’ so we scooted off back to Anglesey with George. Those first few weeks you know were a steep learning curve massively.”

William: “When you have children it really does put your own emotions and your own life into perspective and it’s been very very interesting understanding why I get so upset about some things or why some things really affect me. You know I thought I was quite you know fairly sort of straight down the line, but I’m actually quite, I feel quite a lot more than I used to.”

Kate: “Do you feel that particularly with the work with the air ambulance?”

William: “Yeah, I feel like I take on a lot of the family cases with me, take them home, which I find quite hard. Luckily we’ve got a good support network at work and just talking about it amongst all of us and being able to you know understand the process and hear good news and bad news but follow some of these cases through to the end is quite important.”

Kate: “And it’s not just the individual is it, it has such an effect on the rest of the family.”

Harry: “Precisely, family, friends, anyone that cares about you, so you’ve got that one individual in the middle and then no one, especially with the veteran’s piece as well, all the focus always seems to be on the individual with the injuries. If it’s physical injuries then it’s supposedly easier because you can see those injuries, whereas if it’s hidden wounds then no one can see that but still that person is the focus but the effect that has on them, their family, and their friends is huge, because people care about you.”

William: “But that’s part of the healing process and it’s part of sharing your problems to half them and to make them better with someone you trust and someone you know is going to help you.”

Harry: “Both of us have always been open to each other saying you know we’ve never really talked about it, we’ve never really talked about losing a mum at such a young age, and when you speak to other people’s families and little kids and stuff you think, wow you know I don’t want them to have to go through the same things, you want with a little bit of experience you want to help as much as you can and try and empower them to have that conversation to be brave enough for themselves to talk about it at a young age rather than bottling it up for far too long.”

Kate: “Considering everything that you boys obviously sadly went through, the trauma that you experienced you know I do particularly with the work within early intervention and things like that that I’ve been doing in the early years I do think it’s incredible how strong and how you’ve been able to cope really and I put that down to your really early years and childhood experience. But also the relationship that you’ve got you’re amazingly close and yes you… No but it’s you know and some families sadly aren’t as lucky as you guys have been and being able to share things.”

William: “But we have been brought closer because of the circumstances as well that’s the thing, you know we are uniquely bonded because of what we’ve been through but you know even Harry and I over the years have not talked enough about our mother you know.”

Kate: “Has doing this campaign sort of made you realize that to a certain extent?”

Harry: “Yeah, I think so. I always thought to myself you know what’s the point in bringing up the past what’s the point in bringing something up that’s only going to make you sad, it ain’t gonna to change it, it ain’t gonna bring her back, and when you start thinking like that it can be really damaging you always said to me you know you’ve got to sit down and think about those memories, but for me it was like I don’t want to think about it.”

William: “But it’s I think what happened to us and must happen with others as well is you have to prioritize your mental health you have to say to yourself at some point because it’s very easy to run away from it you know to walk away from it and avoid it the whole time you know someone has to take the lead and has to be brave enough to force that conversation.”

Harry: “This coming Sunday the London Marathon is to some people a year in the making. I mean this is their opportunity to put closure on an issue or this is their opportunity to be part of something amazing and it’s just really exciting for all of us to be a part of it I think. Thirty odd thousand people coming together you know three hundred now seven hundred runners for specifically Heads Together, everybody in the marathon being given a headband, people running for all sorts of different reasons, but as you guys have clearly pointed out over and over again, you can draw one hundred fifty charities that everybody is running for around in a circle and in the middle will be mental health. It’s the one thing that binds everything together.”

Kate: “And so many of the runners that we’ve met have been so energized haven’t they by others having sort of these conversations around them but also feeling like they’re part of this change, and this sort of progression towards sort of I suppose a more open society really.”

I liked that Harry mentioned that because some people on social media try and convince the world that their lives are perfect, you can look at that and think there must be something wrong with you if your life isn’t perfect. That idea has been said before, but I like that he included it.

This is probably the most open Kate has been about the challenges she faced becoming a mother and why she chose mental health to focus on.

I liked that Harry mentioned how the friends and family are affected when someone has mental health issues. That’s a topic we’ve discussed on here multiple times, so I’m glad they included that in this video.

I liked that they did this video in general. Their lack of being in one of these videos was something I mentioned before, so I’m glad that they did a video.

Kate is inarticulate and lacks confidence. The “wasn’t it”/”wasn’t there”/”sort of”/”you know”/”don’t you” fillers are annoying (Kate used them the most, but William and Harry used them sometimes, too, which was also annoying).

I still have a problem with the whole Heads Together campaign, and while I like that they did this video and that Kate spoke more in depth than she has in the past, what they’ve said here is still surface level, but I won’t rehash all that again right now.

Watch The Duke and Duchess of Cambridge and Prince Harry in conversation on mental health for @heads_together #oktosay pic.twitter.com/417gqyqzk0

135 thoughts on “William, Kate & Harry did their very own #OkToSay video”