On Friday, Prince William and Kate Middleton stopped by BBC Radio 1 to pay a surprise visit to Adele Roberts who is running the London Marathon for Heads Together. 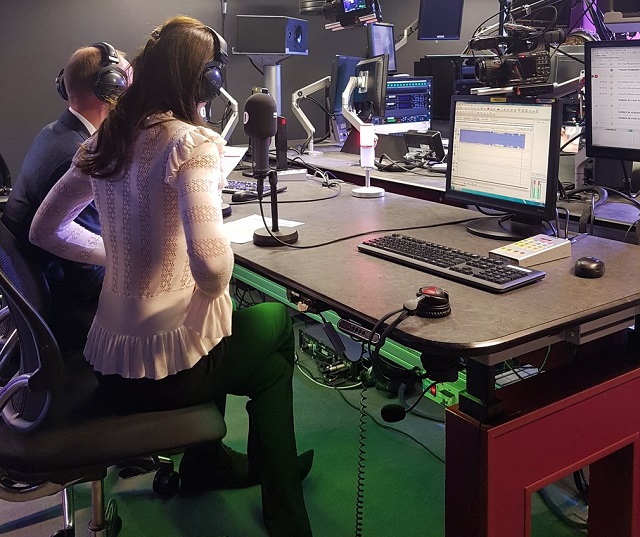 William and Kate did an interview with the hosts, and then helped read the Official Chart.

What would you say to children who think their peers will judge them and parents who are overwhelmed?

William: “I think, I mean, personally, you know, a huge thanks to people like Adele and everyone else who’ve taken on the baton of raising awareness for mental health and for Heads Together particularly. We’ve had a, you know, amazing time promoting mental health and particularly with Heads Together, sort of, campaign. But it’s been really eye opening for us as well and seeing just how much this issue of mental health is really brimming under the surface of public consciousness. It’s like if you equate it to a boiling pan of soup, or whatever, with the lid on, we’ve effectively just taken the lid off. And people are just, you know, taking the challenge on, the baton on, and saying yeah you know what I know someone or I know this or I’ve been through this myself and it’s just a case of trying to get people to have a conversation and realize that emotions are not a bad thing, we’ve all got emotions and we need to speak about them.”

Kate: “And also, I suppose, the power of a simple conversation. You know, I met one young mother who said it was like, for her it was like medicine, and it just shows you, sort of, in, you know, moments like that actually how powerful just starting talking to people, um, can be.”

William: “I have texted in, yep… I’ve texted in on Adele’s show most recently because I’ve been driving to work for the air ambulance shift and she’s the only one brave enough to be up at that time in the morning.”

Kate: “What are you doing texting in your car?”

William: “Obviously… I have not texted whilst driving because that is illegal.”

On going to concerts and things:

William: “No, unfortunately that is a bit tricky. I’ve talked about going to Glastonbury before because I do love my music and Catherine as well.”

Kate: “The last one we went to was Coldplay, wasn’t it?”

William: “Yeah, we saw Coldplay at Wembley. That was amazing.”

It’s not something they can do all the time:

William: “No, and, you know, I’ve got in enough trouble with my dancing recently, so it’s kind of best to keep away from that.”

Do they get The Queen birthday presents?

William: “It’s quite hard to know what to give the Queen for her 91st birthday, she hasn’t really got… We’ve tried making a few things, now that we’ve got, now that the great-grandchildren are around you see they can make stuff and of course that goes down really well. Doesn’t matter what it looks like, it just goes down really well. So we stick to those sorts of presents.”

George does arts and crafts:

Kate: “Are you taking credit for the arts and crafts, is that it?”

Kate: “Cath, yeah I don’t, I’m not sure actually, I’m not that familiar with it, I have to say, but I’ll answer to most things.”

What they watch on TV:

William: “We’re both actually quite keen on boxsets. So yeah, we do, we’re a bit boxset-y, you know, when we get time in the evening to watch films… A lot of children’s programs, my goodness, there’s a lot of them out there… You have to pretend you’re really interested in it because George gets very upset if you’re not showing due diligence to the characters… Well, Fireman Sam has taken an awful lot of interest… Gone past Peppa Pig stage, with one of them, well George has gone past Peppa Pig stage, and Charlotte will probably be into Peppa Pig soon… We’ve watched Homeland, we’re big fans of Homeland. Game Of Thrones we’ve watched as well.”

Do they order in takeout food:

Here is the video of the interview:

And here is the video of them reading the Official Chart:

I mostly missed this on Friday because I wasn’t expecting it and it happened when I was doing other things, so I only saw a few things about it on Twitter but I saw people saying that they spoke about mental health and that they were naturals and whatnot, so I was pretty underwhelmed by this. I mean, it’s cool that they did a radio show and that they talked about random stuff, but I thought they were going to say more about mentalh health and Heads Together, but they only really touched on that twice – at the beginning and in the middle with the social media thing (that I didn’t quote in the transcription). And everything they did say about mental health was pretty much the same things they said in their #OkToSay video. So… yeah. I don’t have anything to add here. 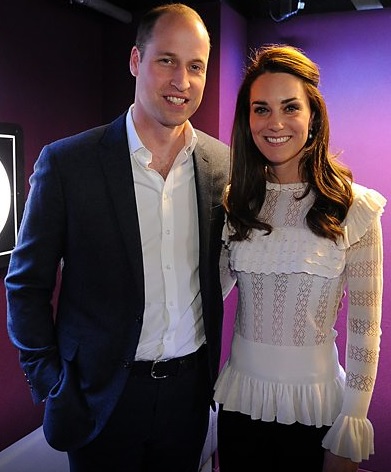 Kate wore a new ruffled shirt and trousers, opting for the Temperley London “Cypre Pointelle Frill Top” ($550) and black trousers. The trousers are slim-fitting trousers but they don’t have a tapered leg and I think they look good on Kate. But that shirt is one of the ugliest things I’ve seen her wear. I just can’t stand ruffles and frills, especially over the boobs. Kate also wore her Annoushka Pearl Drop Earrings, Cartier watch, and suede pumps.

If Kate had instead worn her Goat Binky Blouse she wore to the Heads Together launch with these pants, best look ever. 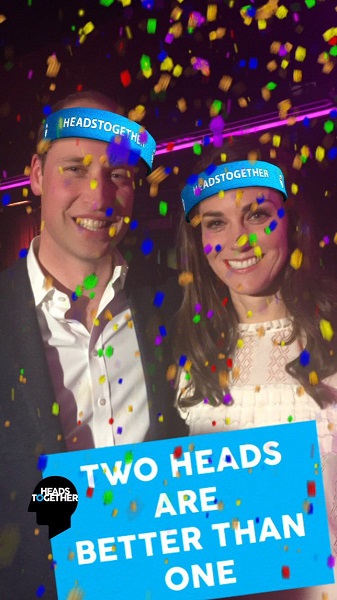 I can’t wait to see the Royal Foundation/Heads Together finances for this year, because I’m so curious to know how much money they spent on headbands, Snapchat filters, Twitter icons, mugs, etc.

William, Kate, and Harry will be at the London Marathon later today, which I will cover tomorrow.