Royal Round Up: Sophie in blue, Maxima in diamonds

Sophie, Countess of Wessex stepped out for a charity lunch for one of her patronages yesterday, while Queen Maxima donned a tiara and a necklace not seen since the 1970s for a State Visit from Argentina.

Yesterday, March 27, Sophie, Countess of Wessex attended the Mencap charity fashion lunch at Sheraton Park Lane Hotel. Sophie has been Patron of Mencap, which supports people with learning disabilities, since 2004. This year’s event showcased work by Suzannah, whose work was on display at the lunch.

Sophie wore Victoria Beckham dark blue knitted top ($520) and knitted skirt ($790). I’m surprised Sophie didn’t chose something by Suzannah – usually when celebs hit up events sponsored by or celebrating a certain designer, they choose something from that designer.

After hitting up Spain in February, the President of Argentina, Mauricio Macri, and his wife, Juliana Awada, were in the Netherlands yesterday, March 27, for a State Visit.

There was the official welcome and inspection of the guard of honor before they visited the Anne Frank House. They also attended a “Business Forum” and hockey clinic at Beurs van Berlage.

In the evening, they held a State Banquet where King Willem-Alexander gave a speech. The speech is long and I don’t want to quote all of it, but I love this part where he calls his wife “the most precious of gifts”:

“Argentina is a country that has always welcomed people from Europe and other parts of the world with open arms. A country that believes in the importance of ambition and development. I love Argentina’s hospitality. I love the asado, where you will often find me behind the parrilla. I love the creativity and ingenuity of the Argentinian people, which have been a source of strength to them in difficult times. Argentina is a vibrant, passionate country. And the country, of course, that gave me the most precious of gifts: my wife, our Dutch Queen.”

For the banquet, Maxima wore a repeated Jan Taminiau gown which she previously wore to her brother’s wedding in 2014. This gown is gorgeous.

Maxima wore the Dutch Diamond Bandeau Tiara, large diamond earrings, three diamond bracelets, and a diamond brooch on her belt. Her diamond necklace is part of a three-piece parure that includes the Stuart Tiara and a large diamond bow brooch. This necklace, which was created for Queen Wilhelmina (r. 1890 – 1948) in 1897, was last seen in public on Queen Juliana (r. 1948 – 1980).

Princess Beatrix was also at the banquet, wearing the Antique Pearl Tiara. 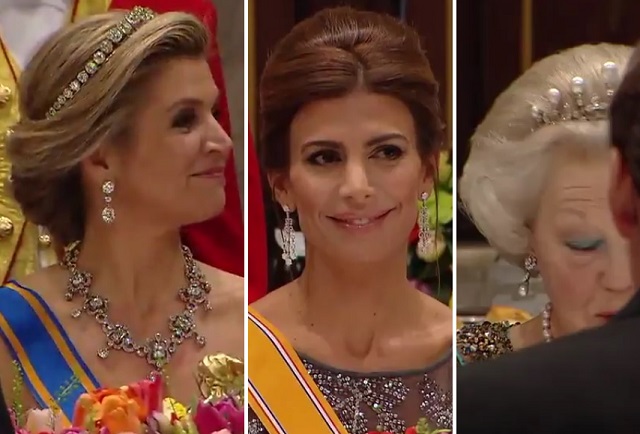 Kate is attending the National Portrait Gallery’s Portrait Gala tonight (I’ll have coverage of that tomorrow). Hopefully we’ll see some nice jewels from her.

62 thoughts on “Royal Round Up: Sophie in blue, Maxima in diamonds”