Welp, that was disappointing. I was looking forward to Kate Middleton showing up to the BAFTA Film Awards for the first time, yesterday February 12, because I thought she would wow me with her fashion, but instead she showed up in a disappointing McQueen gown.

Kate went with a new custom version of the Alexander McQueen Long Tier Violet Jacquard Gown. The original gown, which retailed for $7000, is from the Resort 2016 collection but Kate had it altered to be an off-the-shoulder design.

I dislike it. I don’t much like floral patterns to begin with, but this one is really bad – they look like a bunch of weeds. I actually love the drop waist silhouette on Kate, but I can’t stand ruffled tiers. And the off-the-shoulder sleeves look terribly constricting on Kate, and make her seem top heavy because her bare shoulders look much wider than the black gown (also, while I’m happy that Kate went for an updo, this particular one is quite poofy which adds to the bobble-headed feel of the look). I really dislike this one.

Kate’s earrings are a repeat from 2011 which we finally got a good look at. At first I thought they were new since I had never seen them before, but Anna at the Countess of Wessex Blog noted that Kate previously wore them to the 100 Women in Hedge Funds Gala in October 2011. Rebecca English notes KP said the earrings are not on loan from The Queen but refused to say any more about them.

Kate wore the Prada Suede Point-Toe Cutout Pump which she first debuted back in November 2016 at the Place2Be Awards, and carried the Alexander McQueen Heart-clasp satin box clutch ($2,075). 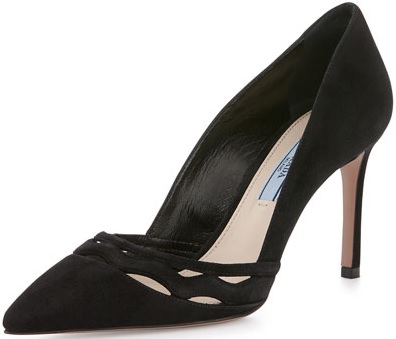 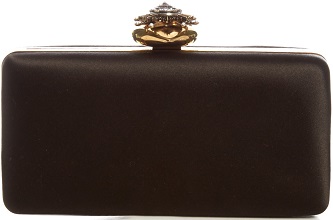 Prince William was also there. He arrived at the Royal Albert Hall with his jacket unbuttoned for some reason. 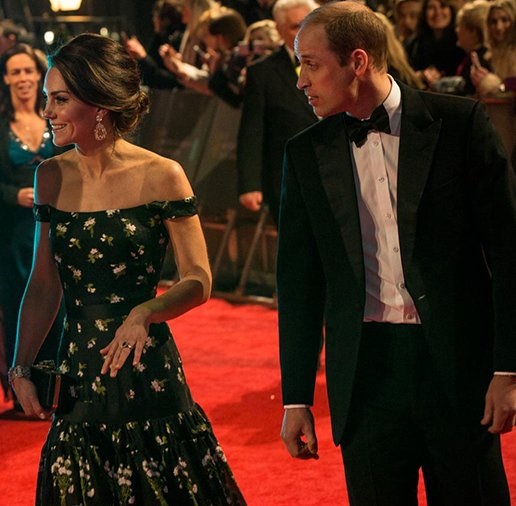 William was there as President of BAFTA, which he has been since 2010, and introduced Simon Pegg and Nathan Lane who presented the Fellowship award to Mel Brooks.

You can find the list of all the winners here. There were not a ton of surprises – Emma Stone won Leading Actress, Viola Davis won Supporting Actress, and La La Land won Best Film.

After Kate’s weed-infested gown, I need a palette cleanser, so here’s a few photos of some of my favorites.

Amy Adams, who was nominated for Leading Actress for Arrival, wore a green Tom Ford gown.

JK Rowling, whose film Fantastic Beasts and Where to Find Them was nominated for British Film, wore a purple gown.

Jamie Dornan‘s wife Amelia Warner‘s gown is a rainbow ball of sparkle and I love it.

Here’s a close up of Director winner, for La La Land, Damien Chazelle for no other reason than I think he’s cute.

174 thoughts on “Kate disppoints in McQueen for BAFTA Film Awards”