Kate Middleton, Princess Madeleine, and Princess Charlene were not the only royals out and about on Valentine’s Day. Camilla, Duchess of Cornwall did several engagements in Bristol – visiting a tea party held by the Royal Voluntary Service, meeting staff and survivors of domestic abuse at Women’s Aid, and meeting members of the public along the city’s North Street.

Camilla began her day at The Trinity Centre where she attended a vintage-inspired tea party held by the Royal Voluntary Service (RVS) – the RVS is a volunteer organisation which helps older people stay active, independent, and able to continue to contribute to society, by providing practical and emotional help.

Camilla, as president of Royal Voluntary Service, met with volunteers and older people who use the services to find out more about how the charity helps older people to stay physically active and connected to their local communities.

She then watched a swing dance demonstration before joining in herself. She took to the dance floor with royal photographer Arthur Edwards, before they were interrupted by other men.

Here’s a video of Camilla dancing. I adore the fact that Camilla got up and danced with people.

Following her visit to Trinity Centre, Camilla visited Women’s Aid – which is a charity working to end domestic abuse against women and children – to meet with domestic abuse survivors and members of staff.

Camilla heard stories from survivors, as well as heard about various projects Women’s Aid is working on including ‘Child First’ (which aims to ensure children are put at the heart of family court decisions) and ‘No Woman Turned Away’ (which works with women who have not been able to find space in a refuge).

Camilla met Women’s Aid Ambassador Mandy Thomas, a ‘real life’ Helen Titchener who advised BBC Radio 4’s The Archers on their recent award-winning domestic abuse storyline. Camilla talked about how The Archers’ storyline was so vital to bringing the idea of domestic abuse out into the open, saying:

“The advice you gave to The Archers has been so brilliant because people who have never heard about it before, people who didn’t understand about coercive control, now understand about it, they became gripped. They had no idea, I’m probably guilty of that too, a lot of us had no idea of quite how terrible that situation was and how easily people were taken in. You know, along comes the charming man who’s polite and nice to everybody else, so they all see his good side, and they don’t see this other dark side, but I think you’ve brought it, you have brought it out in the open and people are talking about it now.”

[my own transcription from the video below]

A complete change of scene @womensaid – both Camilla and I in tears as we listen to chilling stories of domestic violence from brave women. pic.twitter.com/krk8bblcWJ

It was very poignant that Camilla visited Women’s Aid on Valentine’s Day. Polly Neate, Chief Executive of Women’s Aid, said of the visit:

“Women’s Aid is honoured to have welcomed The Duchess of Cornwall today, to celebrate our work, our teams on the frontline, and the courageous survivors at the heart of the organisation. It is a true privilege for us all. Valentine’s Day is a day to celebrate love. But, it is not a happy time for everyone. For women living with domestic abuse, Valentine’s Day can provide no light relief. So, we are especially grateful that The Duchess of Cornwall is championing our work on this significant day, and sending out the powerful message that domestic abuse does not stop on Valentine’s Day.” 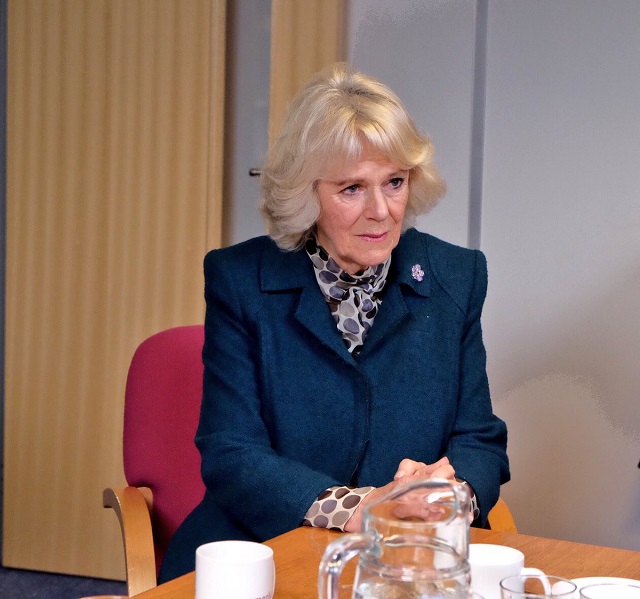 While at Zara’s Chocolates, Camilla watched as chocolatier Zara Narracott made a batch of salted pralines, before trying some of the mixture. I swear, my favorite photos of royals are when they are tasting food. Looking at photos of this chocolate is making me want chocolate.