These photos make me so happy. I legit didn’t think we would see Prince George or Princess Charlotte until their birthdays or Trooping, so the fact that Prince William and Kate Middleton took them along on their Christmas official walk to church which was covered by accredited photographers and reporters is a wonderful surprise.

The Cambridges walked slightly ahead of the Middletons, so the photographers could get their shots of just the Cambs, and were greeted at the door of the church by Rev Nick Wynne-Jones.

The same thing happened when they let the church, with a send off from Rev Nick Wynne-Jones. The best part of this video is around the 1:00 mark when Charlotte runs away from Kate into the grass and Kate has to grab her.

George and Charlotte were given candy canes before they left. George started to eat his, but Charlotte had other ideas for it.

Oddly enough, the Duchess of Cambridge chose to repeat the same coat she wore last time she spent Christmas in Bucklebury.

Kate wore her brown Hobbs “Celeste” coat that she’s worn several times now. This time she added the ASOS Faux Fur Mini Slot Through Collar. Surprisingly, to me, Kate brought back her Tod’s Fringe Buckle pumps which she debuted in Canada – I didn’t think we’d ever see these again, but I’m glad we did.

Kate wore the Queen’s Diamond Stud and Pearl Drop Earrings again, and carried what looks like her Mulberry Bayswater Clutch in red suede.

Over at Sandringham, things weren’t going so well for the royals. The Queen has been suffering from a severe cold, and for the first time in forever (30 years), she missed church on Christmas morning. So the rest of the family had to do the 9AM and 11AM services without her. Also, heartbreakingly, Zara Tindall, who had announced her second pregnancy with Mike Tindall not too long ago, announced on Christmas Eve that she had lost her baby. Condolences to Zara and Mike, and best wishes on a speedy recovery to HM.

Prince Charles led the family on the walk to church, followed by Camilla, Duchess of Cornwall, Prince Harry, Prince Andrew with Princess Beatrice and Princess Eugenie, Princess Anne and Peter Phillips with Autumn Phillips and their two children, for the first time, Isla and Savannah.

Here’s a video of the royals walking to and from church at Sandringham.

Here’s a video of the Queen’s Christmas message. Note the photos around her are of Philip, and of herself and Charles which was just released recently.

A couple more photos of the Cambridges:

While I am loving the fact that William and Kate brought George and Charlotte to Christmas church, it is definitely a product of the fact that they are in Bucklebury. The Queen doesn’t allow children as young as George and Charlotte to attend church, and this definitely would not have happened had the Cambridges been at Sandringham. Considering it was George and Charlotte who made the front pages of several UK newspapers (that and the Queen missing church), I’m almost certain this official walk to church which was covered by accredited photographers and reporters was a targeted insult to the royals. While I think William and his team are incredibly stupid with their PR most times, they knew what they were doing here and the did it well. Great shots of the loving family complete with kids. They even got photographers and reporters who usually go to Sandringham to come to Bucklebury instead. 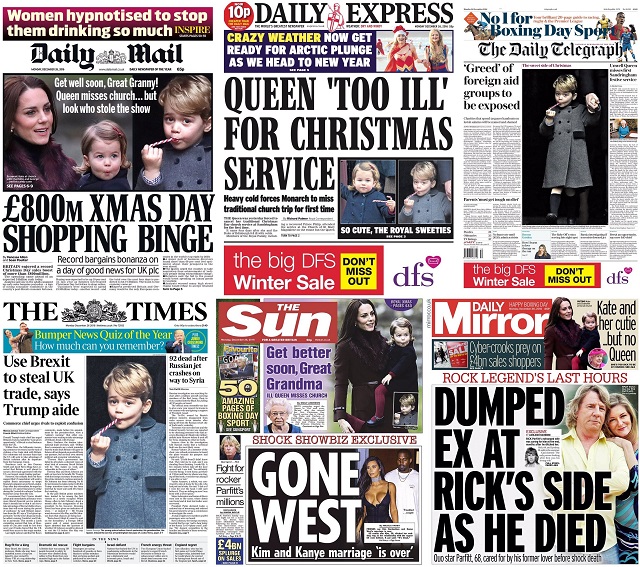