Well this is a lovely surprise. The annual Evening Reception for the Diplomatic Corps was held tonight, November 8, at Buckingham Palace, and Prince William and Kate Middleton joined Queen Elizabeth, Prince Philip, Prince Charles, and Camilla, Duchess of Cornwall for the white tie event. 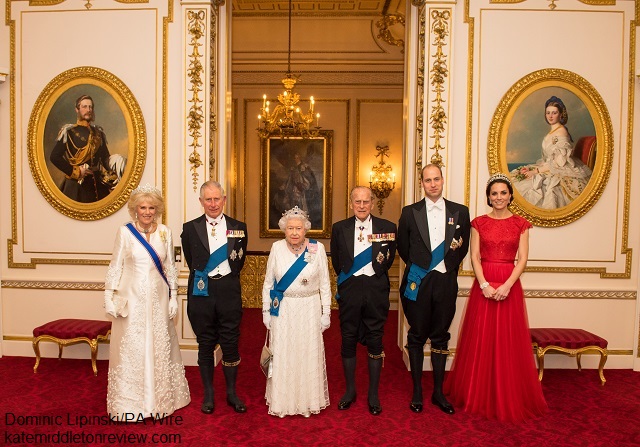 Unexpectedly, and quite historically, Buckingham Palace released a photo from inside the event. The annual diplomatic reception is usually a no press event and they never release photos especially posed ones like this, so this is quite odd, but wonderfully welcome.

The Queen wore a white Angela Kelly gown along with the Modern Sapphire Tiara, George VI Sapphire Necklace and Earrings, and Modern Sapphire Bracelet. She wore the the riband, star, and Lesser George of the Order of the Garter as well as her Royal Family Orders from Georges V and VI.

Camilla went with a repeated Bruce Oldfield gown (which she wore to the State Opening of Parliament and the State Visit from Colombia) with the Greville Honeycomb Tiara, her Pear Drop Diamond Cluster Earrings, and four strand pearl choker with a large diamond clasp. She wore the riband, star, and badge of the Royal Victorian Order and the Royal Family Order of Queen Elizabeth II.

Kate repeated the red Jenny Packham gown she wore to the State Banquet for China last year and wore the Cambridge Lover’s Knot Tiara for the second time (after debuting it at this event last year). This time Kate paired the tiara with the Queen’s Diamond Pendant Earrings she wore to the Place2Be Awards recently. Kate also wore the Queen’s Wedding Gift Bracelet again, and carried a red clutch although I’m not sure which one. Notably, Kate has not received the Royal Family Order from the Queen yet.

This is one of the most formal events of the year and the one event that still brings out the knee breeches and the actual Garter from the men.

In other Kate news, Kate, as Patron of the Art Room, received Mrs. Juli Beattie upon relinquishing her appointment as Director of the Art Room today, November 8.