Crown Prince Frederik and Crown Princess Mary were on an official business promotion trip to Washington D.C. and Boston from September 27-30.

Day 1, September 27, saw Frederik and Mary attend a reception a the residence of the Ambassador of Denmark in Washington D.C. The reception was for the business delegation and specially invited representatives of art, culture, and diplomacy. While at the reception, Frederik presented the HRH Prince Henrik’s Medal of Honour to Annette Rachlin from “Scandinavian Furniture by Annette Rachlin” who received the medal for her work promoting Danish design in the United States.

This blue number is actually a jumpsuit by YDE Copenhagen from the SS16 collection. Mary previously wore it back in May. Her shoes are Prada.

On Day 2, September 28, Frederik did a run around The National Mall with US veterans before he and Mary visited the U.S. Chamber of Commerce where Frederik gave a speech (and Mary was presented with flowers). The couple then attended a business lunch under the theme of sustainability. In the afternoon, Mary visited the Children’s National Medical Center where she toured the hospital, met patients and their families, and read the fairy tale The Emperor’s New Clothes.

Mary also visited the International Center for Research on Women (ICRW). Mary was formally welcomed as a member of ICRW’s Leadership Council, and she presented ICRW President Emeritus Dr. Geeta Rao Gupta with the 2016 Champions for Change Award for Innovation. Mary said: “ICRW is an organization that aligns closely with my personal belief that all human beings are born free and equal in rights and dignity.” 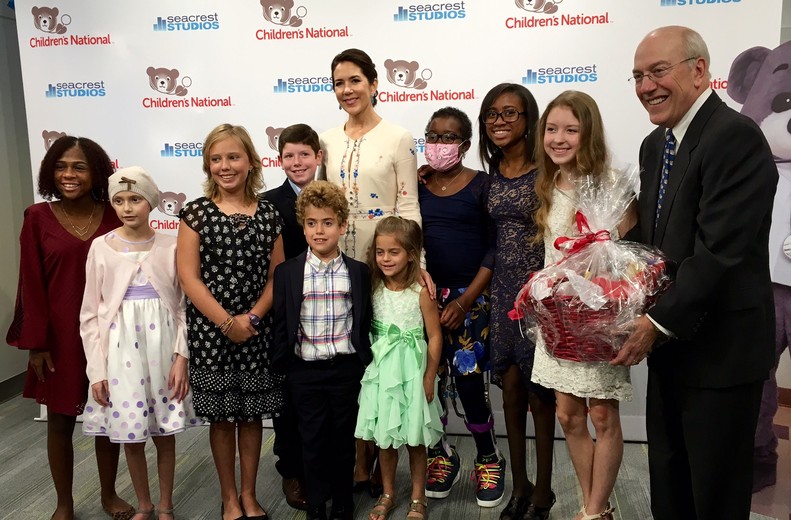 In the evening, Mary and Fred attended The Grand Ball at the Smithsonian Arts and Industries Building. The gala was attended by the business delegation, local partners, selected US politicians, and representatives of the Danish Embassy. Frederik gave a speech before he and Mary took to the dance floor.

Mary’s pretty strapless, geometric gown is by Julie Fagerholt and was previously worn in 2009. Mary’s aquamarine earrings are by Annikat, and her bracelet is Cartier. She wore Gianvito Rossi pumps.

Day 3, September 29, Frederik and Mary visited the exhibition “On the Water” in the National Museum of American History Smithsonian Institution. They then visited the Veterans Affairs Medical Center. 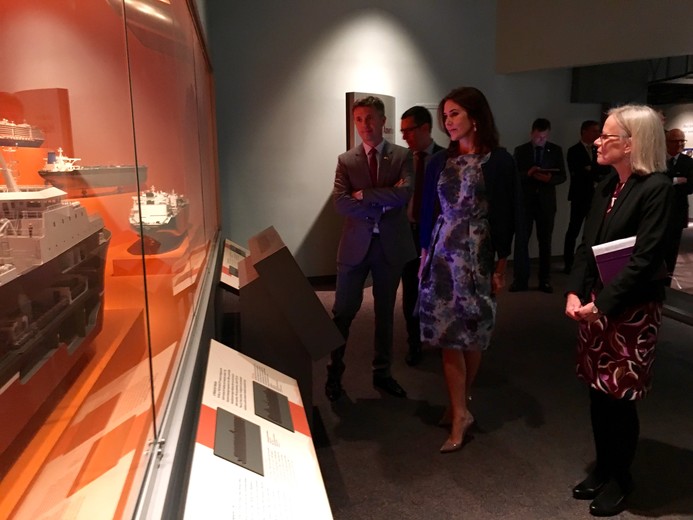 Day 4, September 30, saw Frederik attend the DONG Energy Breakfast Event in Boston, which focused on offshore wind energy for a new energy law in Massachusetts which opens up new market opportunities. Fred then visited the Harvard Kennedy School and presented a $250,000 scholarship donation from the Crown Prince Frederik Fund.

Frederik and Mary were greeted in Boston by Massachusetts Governor Charlie Baker and Mrs. Baker and Lt. Governor Karen Polito.

55 thoughts on “Crown Princess Mary in Washington DC and Boston”