Pippa Middleton
September 19, 2016September 18, 2016 by katemiddletonreview169 Comments on Pippa ‘Don’t call me a socialite’ Middleton has given an interview to promote a new cookbook

Before I get started, since people questioned why I covered Pippa’s engagement, I want to say I decided to cover this interview because she talks about her home life growing up, which also applies to Kate’s home life growing up. That’s the connection.

Pippa met with Andrew Pierce and Richard Kay (the one who previously called out William’s bad personality but has recently written cloying articles about the Middletons) in “a suite of a discreet hotel in the shadow of Kensington Palace” to give an interview about her life, but mostly she’s shilling a new cookbook, Heartfelt, she put together with the British Heart Foundation to raise money for the organization.

Some background: Pippa started writing the book a year ago, and some champion athletes contributed meal ideas, including Olympic triathlon medal-winning brothers Alistair and Jonny Brownlee, and tennis champion Roger Federer. All of the recipes in her book were vetted by the Heart Foundation’s dieticians and meet strict conditions, particularly when it comes to salt and sugar. Pippa was good friends with Miles Frost (son of Sir David Frost) who died of a heart attack at 31 in July 2015.

Some quotes from the interview:

About the interest in her bum after the 2011 Royal Wedding + is that shade at Kate’s accent or Pippa’s: “‘I was surprised and still don’t understand it,’ she says in a voice surprisingly less plummy than that of her sister.”

Dealing with “social media abuse and gossip”: “I have had a few years of being in the public eye and I have developed something of a thick skin. But managing it all on my own has been quite hard. I have quite a lot thrown at me, such as being followed by people hiding behind cars and jumping out with cameras. It can be unnerving. There’s always something cropping up and that has to be managed on my own. It’s been a real eye-opener for James. There have been quite a few hurdles to negotiate.”

Dealing with the public scrutiny has affected her parents, Carole and Mike, as well: “I guess it’s become the new normal for us. It means there are factors we have to weigh up and think about, but we try not to let it affect us. I try not to be too sensitive about things because it’s just a bit of life I have to deal with. But I would be lying if I said it didn’t affect me.”

Don’t call her a socialite: “People see me as someone privileged who has used my position to advantage; that I don’t really work, that I am a socialite – that word really irritates me – and that I’m a party girl without any substance.”

On her failed party planning book, Celebrate: “I believed in it and I can’t blame anyone else, but maybe it might have been better if I had waited a bit longer before doing it.”

On Miles Frost’s death: “The death of Miles was a shock. I always thought a heart condition was something which happens later in life, but Miles was very healthy, very active; he did lots of sports events, marathons, and tough muddies (endurance running over military-style obstacle courses). So it can happen to those in prime condition as well.”

Encouraging a healthy lifestyle: “It’s not just a balanced diet that is important for a good heart health. Being physically active and maintaining a healthy weight will also reduce your risk of heart disease.”

Pips tried out recipes on her family: “I also tried some of the dishes out on the family. They were very honest. So some of the recipes have been culled. They never made the book!”

But Carole’s recipes didn’t make the cut: “What about her mother’s childhood recipes, have any of them made the book? Pippa pauses and says: ‘Er, none.’ Was she mortally offended? Pippa replies laughing: ‘No, not at all.'”

The Middleton kids were forced to eat all the food on their plates or they couldn’t leave the table: “As children we didn’t have anything different, we always ate what our parents ate. My mother and father took the view, and I agree, that you don’t need to make different food for children. We had to eat everything on our plate and not be fussy about food. There were times when I would be sitting at the table after lunch or dinner, having not eaten something because I decided I didn’t like it and actually remaining there until I had eaten it. We had to stay at the table until we had eaten everything. There were no exceptions. And in the end I liked everything because I had to.”

Carole did most of the cooking: “She wouldn’t spend hours in the kitchen because she was working, but it was always what I call proper stuff, home-cooked food and rarely any takeaways. Even from a very young age we had lots of traditional food like shepherd’s pie, liver and mash with an onion gravy, kidneys and even mussels. Good carbohydrate, protein and vegetables, really good for you and cheap as well. We had to eat the lot.”

The challenge of cooking with low salt: “My regular use of ingredients like feta, anchovies and olives was ruled out because, though they add extra flavour, each introduces salt. Instead, I leaned more heavily on citrus and garlic, and spices that provide heat, such as chilli, and paprika.”

Pippa wants to be “normal”, too! “I work very hard. I’m true to my values. I just try to live a normal life like many of my friends.”

Her daily work: “She divides her time between writing a column for Waitrose Kitchens and occasional pieces for society glossy Vanity Fair. And working for a number of charities such as the British Heart Foundation, as well as the Mary Hare School for the deaf and Disability Snowsport UK. ‘People seem to think I must have lots of support helping me but I don’t, it’s just me.'”

I was going to let the “you don’t need to make different food for children” line go since I can see both sides to that argument. On the one hand, I totally get parents not wanting to cater to their kids and instead force them to eat whatever the parents cook. But on the other hand, I understand why parents would take their kids’ likes and dislikes into account when preparing their meals (to a certain extent). My mother’s mother forced her kids to eat whatever she cooked, but my cousin’s son hates tomatoes and always makes a separate, tomato-free plate whenever she cooks anything with tomatoes in it. Different people parent differently and that’s fine. No judgement.

I wonder if Kate is continuing that same sort of attitude toward food for her kids. Like, does she take into account George and Charlotte’s likes and dislikes when preparing their meals or do they have to eat whatever she decides to make them? And do they have to clean their plates or can they stop when they are full?

Pippa also wrote a piece for the DM, but it’s really just a preview for the book in that it’s recipes. You can read that piece here if you’d like.

The book is available on September 29. All proceeds go to the British Heart Foundation to fund future research.

The photos in this post, aside from the books cover, are of Pippa at various British Heart Foundation-related events over the past two years she’s been their Ambassador. 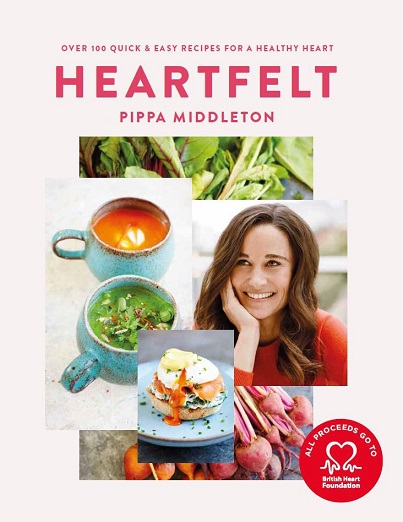