Every year, the Cambridge crew vacation for a weekend in Scotland with The Queen at Balmoral. This year is not any different: Prince William, Kate Middleton, Prince George, and Princess Charlotte have jetted off to Scotland for their annual holiday. 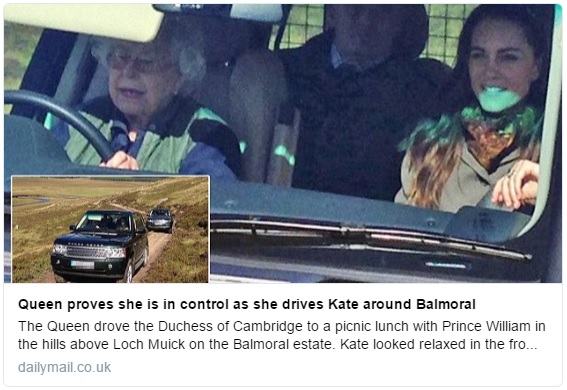 On Friday, the Queen was photographed driving Kate out to lunch on the hills above Loch Muick on the Balmoral estate. William had been out on a grouse hunt during the morning and the Queen and Kate were joining him for lunch, according to the Daily Mail.

According to the Mail, the Cambridges arrived in Scotland on Thursday and are staying at Birkhall, Prince Charles‘ residence on the Balmoral estate.

Whenever William and Kate stay with the Queen, they always attend church (because the Queen is very serious about that stuff even though William and Kate don’t seem to be), and we’ve gotten photos of them in the car heading to church in the past. So we may get photos later today of that.

The Stewards Academy news section on their website gives more details of the schedule:

“The Duke and Duchess will attend a lesson with year 8 pupils and 4 year 10 peer mentors, discussing the impact of big changes in their lives and what support is available to see them through these changes.

“The Duke and Duchess will then join a year 7 assembly where The Duke will make a short speech. Other pupils will then speak about how they have coped with big changes in their lives. A teacher will speak about the change from once being a pupil and Head Girl of Stewards and now being an English teacher at her old school.

“The Duke and Duchess will then be introduced to the Head Girl and Head Boy, and be escorted across the quad where the whole school will be present, and where they will speak to pupils.

“Finally the royal couple will meet with a group of parents from the school to discuss how best to support their children through the challenging times in their lives and how they can encourage their children to talk about big changes.”

Do you guys remember back in April that KP said William would “speak out against rhino poaching”, and then when that day rolled around William didn’t say anything? KP didn’t say William will make a speech at Stewards Academy, but since Stewards Academy has now claimed he will I am now expecting a speech from William on Friday, and if he doesn’t give one I’ll be disappointed.

I do have to wonder, though, why William is accompanying Kate on this visit. Place2Be is Kate’s patronage, and whenever she’s visited a Place2Be school in the past she’s always visited alone, so why is she now bringing Prince William? I realize Place2Be is a Heads Together partner and this visit is also in support of Heads Together, the joint campaign between William, Kate, and Harry, but Harry has done Heads Together stuff by himself, why can’t Kate? Hm…

94 thoughts on “Kate Middleton vacations in Scotland with Queen, adds appearance to schedule”