Crown Princess Mary in Rio for the Olympics: ‘it’s so exciting when the Games start’

While Prince William and Kate Middleton and Princess Charlene have decided to skip the Rio Olympics, Crown Princess Mary has not. She and Crown Prince Frederik, who is a member of the International Olympic Committee, are in Rio for the Olympics, which start on Friday. While in Rio, Mary spoke to the Daily Mail about her thoughts on the Games. 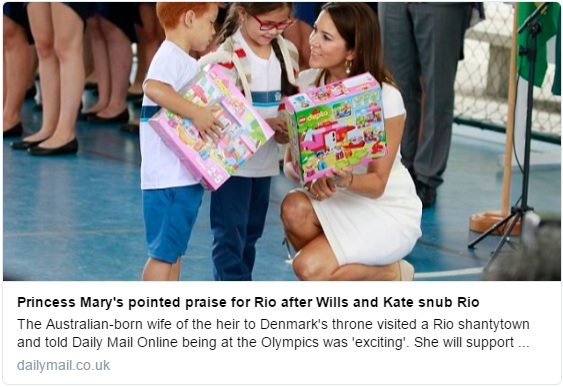 Mary was visiting the Institute for Child Development in Rio where she presented children with boxes of Lego when she spoke to the Mail about the Olympics:

“It’s been a very positive experience like the trips we’ve had to Brazil with Danish business delegations and so forth. And it has also been great to see the beautiful country, Rio de Janeiro, Sao Paulo, that Brazil is. We do have a lot of expectations for the Olympics – it’s so exciting when the Games start, so I’m looking forward to Friday [opening ceremony]. We’re looking forward to following the Danish athletes of course, but as well all the athletes of the world and the amazing performances they’ll put in.

“I’ll absolutely support Australians so long as they’re not competing against a Dane. But it would be great to get gold [for the Danes] and silver [for the Australians].”

Mary declined to comment on the Zika virus, but an aide said: “Yes, we thought about it [Zika] but life must go on and the Olympics are important. The Crown Prince [Frederik] is the head of the [Danish] Olympic delegation after all.”

The Danish government donated 5,000 sets of Lego (which is a Danish-owned business) to impoverished schools in Rio as part of the legacy Escolas de Amanha project. Mary sat down with the kids while they played, and she had this to say:

“I don’t know how much exposure they had to it [the Lego] before but they just go straight to building, using it. I mean there’s an instructions book saying here’s step one, step two, step three, step four but they’re more interested in making their own stuff out of it and that’s what Lego is all about. Building your own world.”

I hate to be mean, but, um, duh! Lego is pretty intuitive and, yeah, you just start building. That’s the beauty of Lego. None of this crazy sets with lots of directions, just grab some Lego and play.

Crown Princess Mary opened this morning the LEGO-classes at the Institute for Child Development in Rio de Janeiro pic.twitter.com/njCvyjQyzf

On August 1, Frederik and Mary attended the opening ceremony of the 129th International Olympic Committee session.

Mary’s dress is from Burberry Prorsum‘s AW14 collection and her bag is Bottega Veneta.

The Crown Prince couple were joined by Prince Joachim, Princess Marie, Prince Nikolai, Prince Felix, Prince Henrik, and Princess Athena at the opening of the Danish Pavilion, named Heart of Denmark. The Pavilion will be use to promote Danish businesses, sports and culture and will host a number of culinary, sporting and musical events throughout the games. More photos at the Daily Mail.

50 thoughts on “Crown Princess Mary in Rio for the Olympics: ‘it’s so exciting when the Games start’”