Pippa Middleton is finally engaged, you guys! Do you want to see her giant diamond ring? Let’s have a looksee… 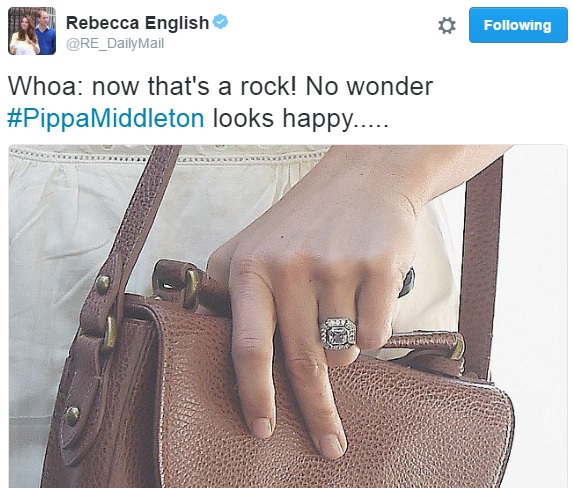 Pippa’s ring appears to be an art deco inspired 4 carat Asscher cut diamond set in an octagonal halo of round brilliant cut diamonds. It was probably a custom design and probably cost upwards of £200,000.

What do you think of Pippa’s ring? While I love Asscher cut diamonds, the halo makes the ring too large for my taste. But as long as Pippa likes it that’s what matters. I wonder if Pippa got any say in the ring design? I would hate it if I didn’t get any say in my engagement ring design.

Oh yeah, engagement announcements are about more than the ring. Silly me, I forgot. Pippa’s fiance is 40 year old James Matthews, a banker and hedge fund manager who is worth a lot of money. Matthews comes from money – his father made millions from motor racing and owning a hotel – but has amassed a fortune of his own. He owns a £17 million home in Chelsea. Matthews’ brother, Spencer, is a reality show person.

Pippa and James dated for a while years ago, but got back together last fall after Pips split from Nico Jackson, whom she dated for several years.

Pippa and James confirmed their engagement in a statement: “Miss Pippa Middleton and Mr James Matthews are delighted to announce they became engaged on Sunday 17th July and plan to marry next year.”

A spokesperson for Prince William and Kate Middleton said of the engagement: “The Duke and Duchess of Cambridge are absolutely delighted with the news.”

Michael Middleton said in a statement: “Carole and I are absolutely thrilled with the news. They make a wonderful couple and we wish them every happiness together.”

[All quotes from the Daily Mail]

I anyone else excited for this wedding? I am. I can’t wait to see what kind of dress Pips chooses, I want to see Kate as Matron of Honor, I want to see Prince George and Princess Charlotte as Page Boy and Flower Girl. I wasn’t expecting Pippa to announce an engagement this year, so this is fun.

On Monday, July 18, Pippa attended The Frost family final Summer Party to raise money for the Miles Frost Fund in partnership with the British Heart Foundation and played hide-and-seek with her ring finger. She wore an LK Bennett Karo Printed Silk Dress in pink which retail for $495.

PS. This is James Matthews (pictured with Pippa at Wimbledon on July 6). I’ve seen people say that he’s hot, but he’s not my type.