Kate Middleton and Prince William attended the Chelsea Flower Show for the first time yesterday, May 23. They were joined by Prince Harry, who is an old hat at this now, having attended for several years. Other British royal family members who turned up include: Queen Elizabeth II, Princess Beatrice, Princess Eugenie, Sophie, Countess of Wessex, and Princess Anne. 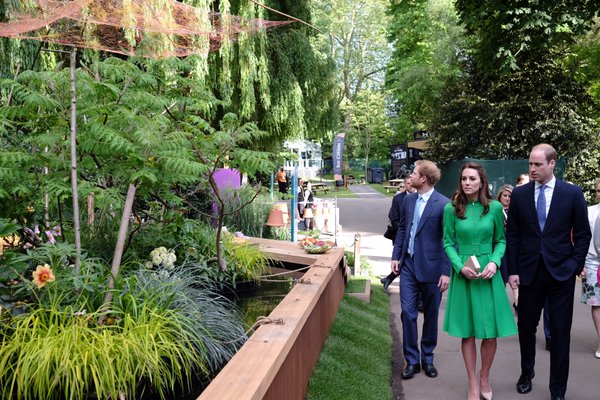 The annual Chelsea Flower Show, established in 1913, is put on by the Royal Horticultural Society outside the Royal Hospital Chelsea. 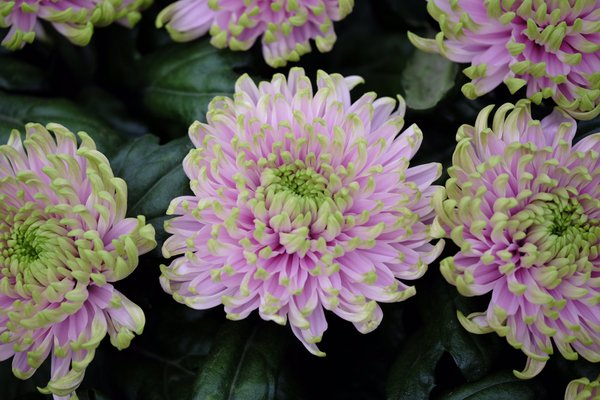 William, Kate, and Harry’s first stop was the National Chrysanthemum Society display to view the Rossano Charlotte, which is being sold for the first two years through Waitrose with half the profits going towards East Anglican Children’s Hospice (EACH), Kate’s patronage. Key word there is “profits”, because although each flower is being sold for £8 only 50p of that is being donated to EACH.

The Royal Trinity spoke to Alison and John Peace from the Chrysanthemum Society. William asked where the Charlotte flower is available and joked: “You could always steal one off the exhibit!” To which Kate told him: “Waitrose are selling them!” Then William said to the Peaces: “Can you spell Chrysanthemum? I can’t even say it.”

Kate asked the Peaces: “Do you have a favourite? You don’t have to be biased.” Harry then pointed at the Rossano Charlotte in the centre of the display, and joked: “What about the one that’s in the middle.” 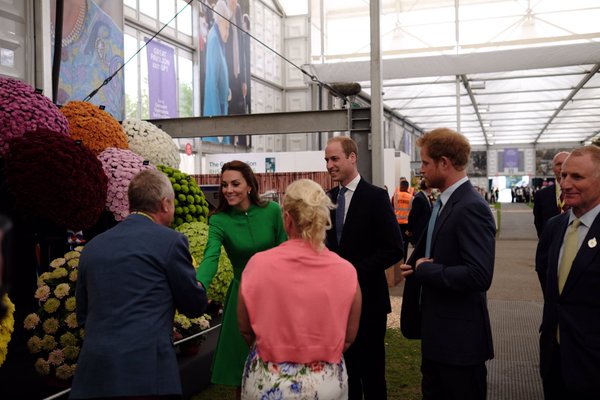 A Kensington Palace spokesman said the Cambridges previous non-attendance at the Flower Show had largely been down to “diary issues” but added: “This year the diary has worked out fine and especially in the Queen’s 90th year, Their Royal Highnesses were keen to join her.”

I can forgive May 2015 since that was only a couple weeks after Charlotte was born, but William and Kate had nothing conflicting in May 2014, May 2013, or May 2012. So I’m not sure what they’re on about “diary issues”. 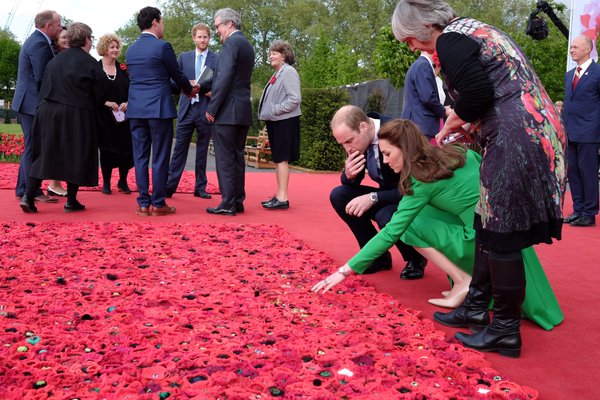 The Cambridges and Harry visited the 5000 Poppies project – a sea of 300,000 knitted flowers from Australia laid out in front of the Royal Hospital. The project was designed by Philip Johnson, Lynn Berry, and Margaret Knight and was started three years ago as a tribute to their fathers; then the project snowballed into what it is today. Kate told Lynn, “I love the fluffy ones”.

The Queen and Sophie also stopped by the 5000 Poppies dislay. 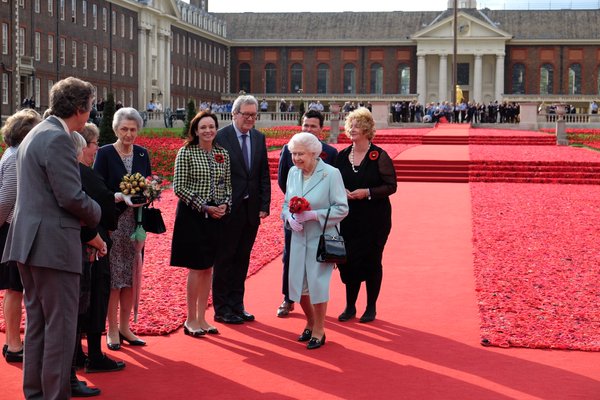 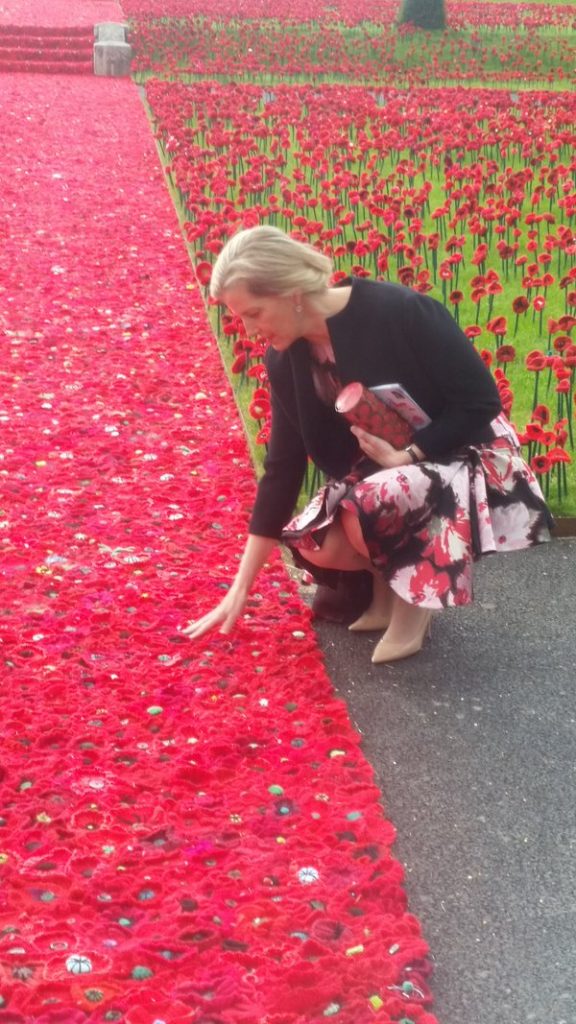 The Queen toured the Flower Show, including a display in the shape of her head, titled ‘Behind Every Great Florist’. 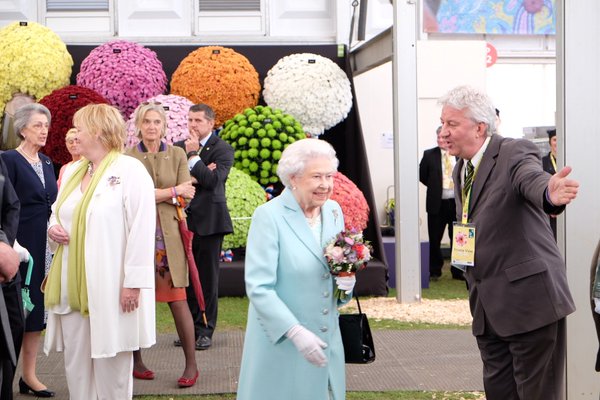 Kate continued her theme dressing at the Chelsea Flower Show. She repeated a bespoke green Catherine Walker coat-dress which she previously wore to the National Arboretum in Canberra, Australia in April 2014. I was bored with this coat the last time she wore it and I’m bored with it now. I really don’t like how high the collar is; it’s too constricting to me, especially with her hair down.

I think Kate may be growing her bangs out and they are at that really annoying length where they are too long but not long enough, which is why she’s loving this pulled back bangs hairstyle lately.

Here are photos of Prince Harry and Sophie, Countess of Wessex. Sophie wore an Alexander McQueen “Pink Floral Ruffle Dress” ($7765 at Lyst), a black crop jacket from Emilia Wickstead, and a Sophie Habsburg “Chenille” clutch (€420.00). Sophie looks nice, but my god McQueen is so expensive.

Princess Beatrice and Princess Eugenie attended. They brought their boyfriends: Dave Clark (not pictured) and Jack Brookbanks (in the third photo below). Prince Andrew (not pictured) was also there.

The Queen attended, as did Princess Anne. Prince Philip (not pictured) also attended. HM wore a lovely blueish, minty color and her Chelsea Iris Brooch – which was a Diamond Jubilee gift from the Royal Horticultural Society.

In the afternoon, ahead of the visit to the Flower Show, Kate held a meeting with representatives working in support of services for women in prisons. Kate visited a women’s prison back in September 2015.

Here are some photos of flowers that I liked.