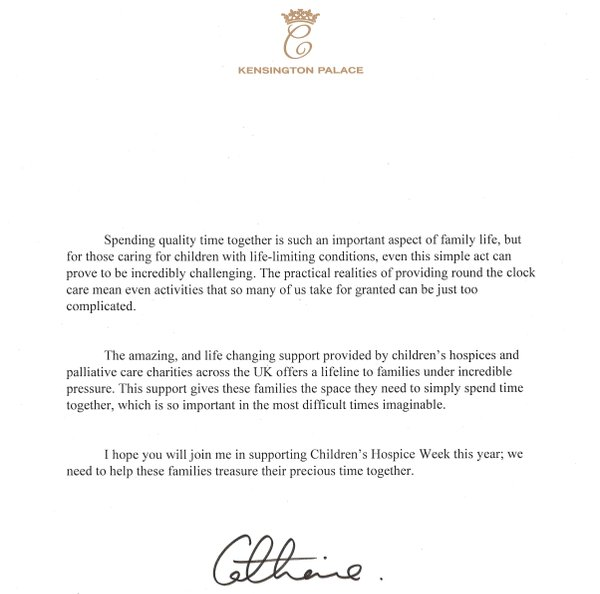 “Spending quality time together is such an important aspect of family life, but for those caring for children with life-limiting conditions, even this simple act can prove to be incredibly challenging. The practical realities of providing round the clock care mean even activities that so many of us take for granted can be just too complicated.

“The amazing, and life changing support provided by children’s hospices and palliative care charities across the UK offers a lifeline to families under incredible pressure. This support gives these families the space they need to simply spend time together, which is so important in the most difficult times imaginable.

“I hope you will join me in supporting Children’s Hospice Week this year; we need to help these families treasure their precious time together.”

Something positive: This message is miles better than the three short sentences Kate released last year for Children’s Hospice Week. That was some generic garbage while this actually touches on just how hard it is for parents to provide round the clock care for their children with these conditions and how hospices help them.

This year’s message may not have been the bare minimum (that was 2015’s message), but it still was not even half of all she could do.

As we know, Kate is Patron of EACH, and has been since 2012. EACH offers free, tailored support for children and young people with life-threatening conditions across Cambridgeshire, Essex, Norfolk, and Suffolk. Considering that their support is free to families, EACH relies solely on donations.

In related news, Kate sent a message of support to ICPCN (International Children’s Palliative Care Network) on May 19, along with a previously unseen photo of her wearing a white jacket. I don’t know anything about what the message actually said. The conference was held in Buenos Aires.

Catherine Duchess of Cambridge sends a message of support to attendees at #ICPCNCon2016 support the children NOW pic.twitter.com/Sx16nw3452