Prince William has given an interview with the BBC to mark Queen Elizabeth‘s 90th birthday. In the interview, the Duke of Cambridge talks a lot about his views on responsibilities and duty and what that means to him and how he intends to proceed with his life. He also talks about his family and choosing to spend more time with them than working.

BTW William and Prince Harry toured the Star Wars set at Pinewood Studios the other day. I’m including some photos of that event at the end of this post. 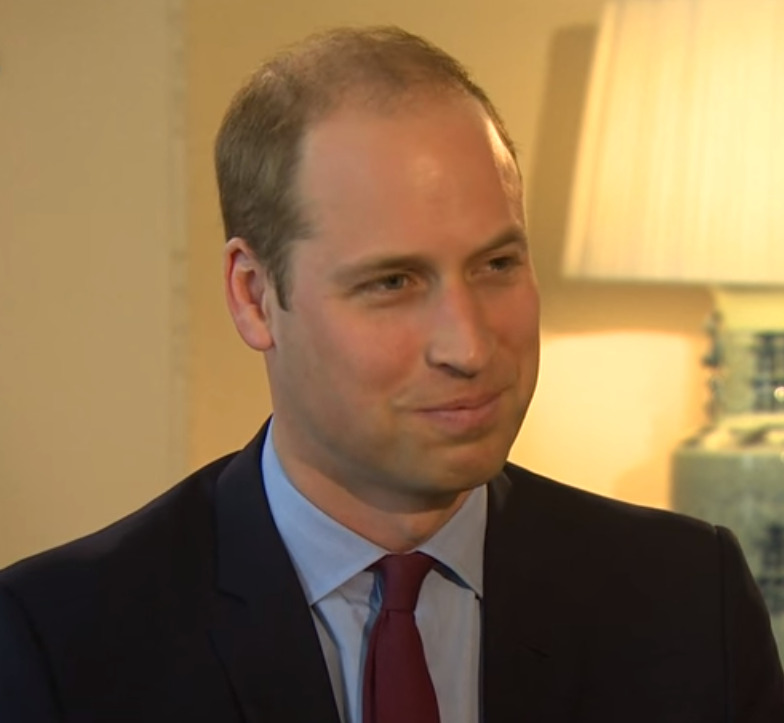 I’m not quoting the whole thing, but here are some quotes from William’s interview which I found interesting. And a couple of my own comments thrown in.

Has the Queen made a point to guide William:

“She’s hasn’t, no. She’s more of a soft influencing, modest kind of instruction or guidance rather. I don’t think she believes too heavily in instruction; she believes in finding your own path, but with very good examples and guidance around you to support you. And I think that’s what she’s found to be the most effective for herself is that she has been able to, over the past since 1952 the many years, understand how best to, how best she can make an affect with her role. And I think it’s all about finding your way with the right people, the right support, close family around you to guide you and I think she sees that more important than instructing.”

To what extent does William share the Queen’s devotion to duty:

“I think royal duty is extremely important. I think it’s part of the fabric of what the Royal family and any future monarch has. It’s something that is very important, and I take duty very seriously, I take my responsibilities very seriously, but it’s about finding your own way at the right time, and if you’re not careful, duty can sort of weigh you down an awful lot at a very early age, and I think you’ve got to develop into the duty role. It’s something I take very seriously, but with my family and with my role of air ambulance for instance, I think there’s a number of things I’ve got my fingers in many pies at the moment that I want to keep an eye on. That will change as life goes on and I will take on more.”

Is William a reluctant royal:

“To be honest, I’m going to get plenty of criticism over my lifetime and it’s something that I don’t completely ignore, but it’s not something I take completely to heart. I’m concentrating very much on my role as a father – I’m a new father and I take my duties and my responsibilities to my family very seriously, and I want to bring my children up as good people with the idea of service and duty to others very important. But if I can’t give my time to my children as well, I worry about their future. Plus the serving the community with the air ambulance, I’m very, uh, I find the air ambulance role very important to me; it’s serving the community, working alongside extremely good professionals in the medical profession, and then there’s my royal responsibilities which I still keep going. And when the Queen decides she’s going to hand down more responsibilities, I’ll be the first person to accept them.”

Does William’s three part life have the full support of the Queen and Prince Charles:

“Absolutely. My grandmother and my father are 150 per cent supportive behind everything that I’m doing – and Harry and Catherine. They very much understand whilst my grandmother is still extremely active at the helm of the Royal family, as the monarch, my father is incredibly busy with his charitable activities and other responsibilities, there’s the time now and the space to explore other means of doing a worthwhile job. And for me, the air ambulance is an incredibly important part. It’s not going to last forever, but I think it’s important.”

Do the Queen and Charles think William should be exempted from royal duties at a young age because they had to take on duties at such young ages:

“No, I don’t think it’s that, I think it’s more they understand there’s the flexibility right now whilst I’m still relatively young and they’re still very, very active. There’s an order of succession and I’m at the bottom at the moment, so there is the time and space in the future to take on more into that role.”

Um, William, you’re second in line in the order of succession. That’s not “at the bottom”.

How long will William remain at EAAA:

“I have a contract and when my contract runs out that will probably be the time that I finish.”

William’s contract runs out in March 2017. So all that training and money spent and William will only work there for two years. Yep, that sounds like William.

What sort of king does William hope to be:

“It’s something that occupies a lot of my thinking space as to how on earth you would develop into something modern in today’s world. I’m in a unique position and actually a very privileged position to see some of this now which is that I’ve got my grandmother who takes a very passive role in how she believes her role should be, she’s above politics, she’s very much away from it all and keeps [garbled words]. And I’ve got my father who minds an awful lot about many of the causes he’s involved in and really digs down into his charitable areas as much as he can, so I have an equal idea as to how my role could benefit everybody in the future. … I think in the Queen I have an extraordinary example of somebody who’s done an enormous amount of good, and she’s probably the best role model I could have in front of me.”

I get that this interview is to mark the Queen’s birthday and all, but wow, William totally just threw his father under the bus with that last sentence. Also, William is essentially saying that taking a passive role instead of an active, involved with charities role is the option he is striving toward. So don’t expect him to be active in his charitable duties, I guess.

Does George understand he’s a royal and have William and Kate prepared him in anyway for his future as a royal:

“As far as we’re concerned, within our family unit we are a normal family. I love my children the same way any father does and I hope George loves me the same way any son does his father, so we are very normal in that sense. And there’ll be a time and a place to bring George up and understand how he fits in the world. But right now, it’s just a case of keeping a secure, stable environment around him and showing him as much love as I can as a father.”

[transcription of video below]

Because any time this topic comes up I get push back on my opinion on it, I’ve been thinking about what annoys me so much about William’s attitude toward balancing parenthood and royal responsibilities. And it’s this: William does not understand his privilege.

I’m sure being a future king and having grown up in the public eye comes with it’s unique stresses, but William lives a very privileged life and he just does not seem to comprehend that.

William can visit his homeless charity, he can visit a cleaned up slum, he can talk to women for an hour, but he just doesn’t understand the privilege that he has.

Here are the photos from the Star Wars set. Harry and William were shown around by Daisy Ridley (Rey in The Force Awakens), and also got to meet Rian Johnson (the director of Episode VIII), John Boyega (Finn in The Force Awakens), Chewbacca, Kathleen Kennedy (the producer), and Mark Hamill (Luke Skywalker – or as he will always be known to me, The Joker). 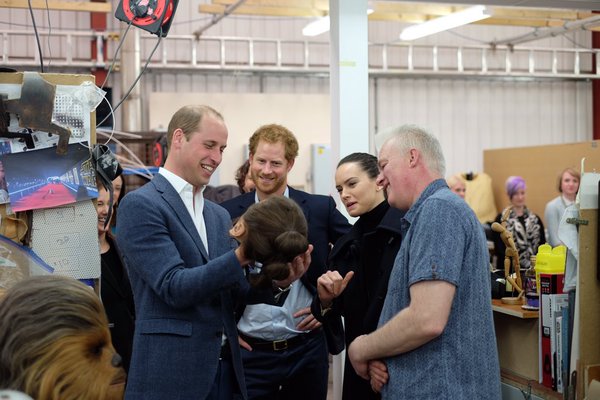 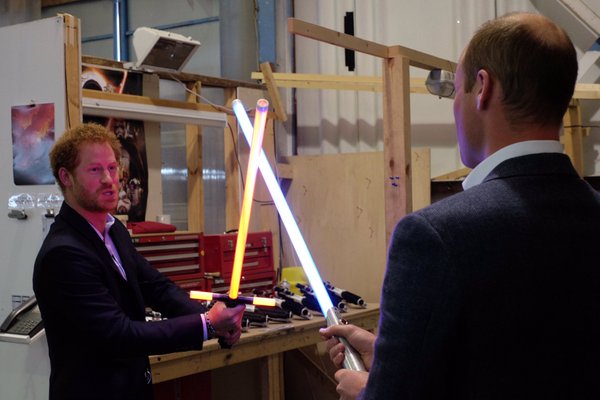 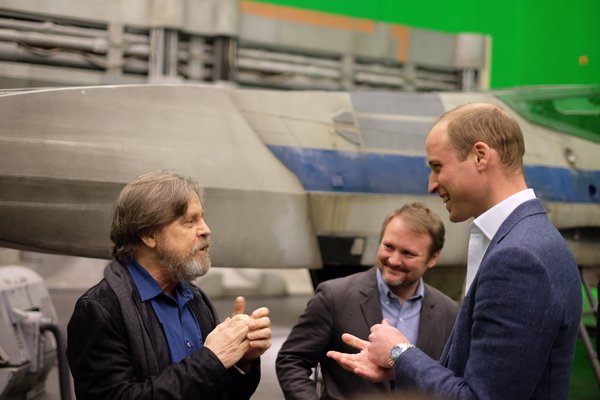 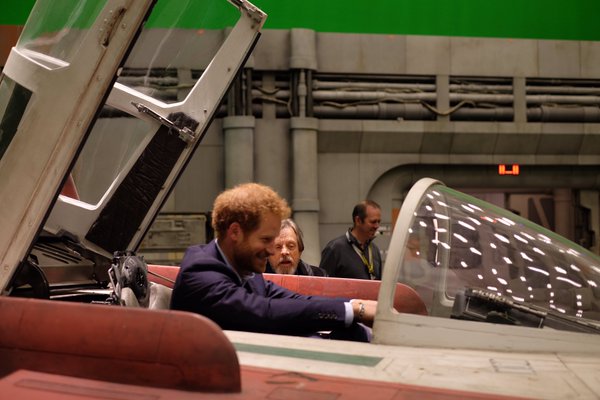 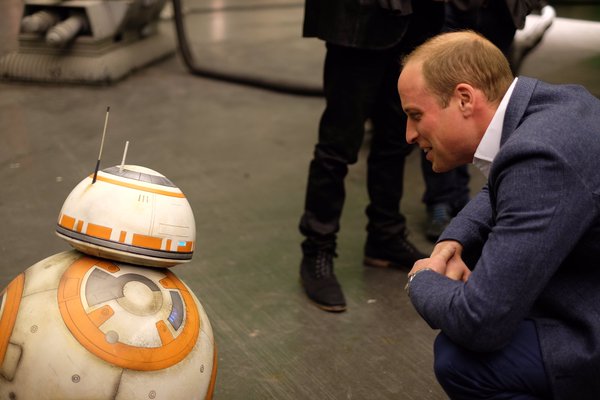 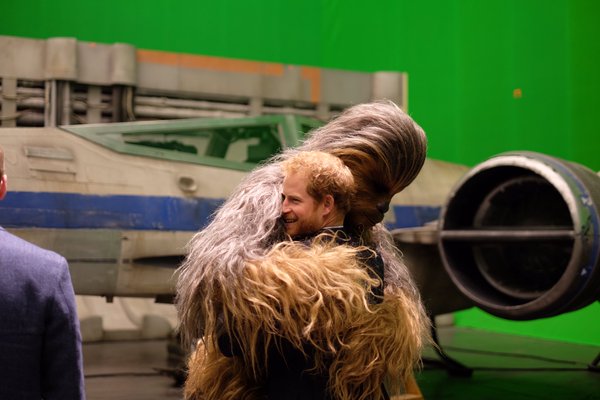