Kate Middleton and Prince William spent part of today, March 10, meeting with suicide survivors and hearing about their experiences.

To start the morning, William and Kate made a private visit to the charity Maytree. Maytree is a suicide support center which “provides people in the midst of a suicidal crisis with the opportunity for rest and reflection, and gives them the opportunity to stay in a calm, safe and relaxed environment”. While the visit was private, the Maytree Twitter account posted two photos of the visit.

“Maytree’s staff team and volunteers were thrilled to have met the Duke and Duchess of Cambridge today and to have had the opportunity to highlight Maytree’s vital work in suicide prevention. Suicide is the last taboo, so to have such a high profile couple shed a light onto the issue is priceless. I hope that their visit to Maytree is a catalyst to a useful and meaningful journey for them both.” 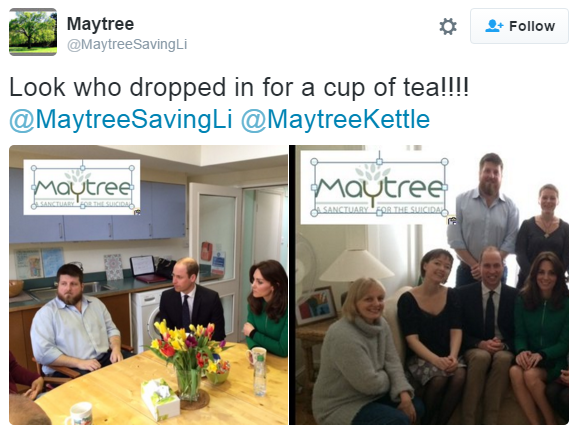 Then William and Kate moved on to St. Thomas’ Hospital in London where they met with suicide survivor, Jonny Benjamin, and the man who saved his life, Neil Laybourn. The meeting lasted for half an hour. 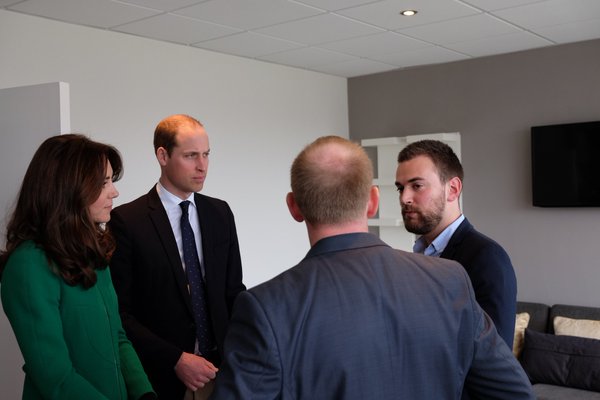 After developing auditory hallucinations at the age of 10, depression at the age of 16, and being diagnosed with schizoaffective disorder in his early 20s, in January 2008, Jonny Benjamin stood on the Waterloo Bridge in central London preparing to take his own life. A random stranger stopped and talked to Jonny, saving his life. Jonny was then taken to St. Thomas’ Hospital where he was sectioned.

Six years later, together with Rethink Mental Illness, Jonny launched the #FindMike campaign in January 2014. Two weeks later, Neil Laybourn came forward as the man who saw Jonny on the bridge six years earlier and helped save his life. You can read more about the #FindMike campaign here. You can watch the documentary here (though for some reason it wouldn’t play for me). Jonny has a YouTube channel where he talks about mental health which you can view here. 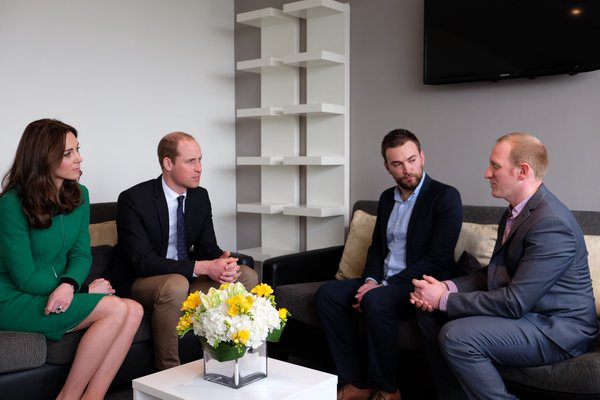 Jonny and Neil talked to William and Kate about that day in 2008, as well as their current work to raise awareness about the stigma associated with suicide, the importance of talking about mental health from a young age, and a project the two of them have been working on together.

Of meeting William and Kate, Jonny tweeted: “Thanks for tweets.What a day!Great to talk to Duke & Duchess about mental health & suicide-they said they’re determined to help break stigma”

Here is a video of part of their interaction.

During the meeting, William said:

“Someone told me five people a day try to kill themselves. I was just blown away by the statistics. For both of us, the mental health piece has got lots of aspects. It’s such a big issue that we need to do something about it. We feel it’s been raised higher up the ladder. It’s suddenly bubbling just under the surface. Now we need to get up to the next level, to the surface.”

William should have looked up the real statistics on suicide instead of just going off of what “someone” told him. I have statistics and warning signs about suicide at the end of this article, as I did for the signs of domestic abuse when Camilla visited SafeLives.

Kate contributed to the conversation by saying: “We see through the work that we do with addiction, homelessness, and knife crime that a lot of it stems back to childhood.”

That’s the only quote I can find that’s attributed to Kate.

*Deep breath*….. I know I was not there, so I have no idea what Kate said except for this quote, she may have said the most brilliant thing about mental health and suicide prevention, but all I have to go on is this one quote… And it is shocking to me that after two visits to the Anna Freud Centre, two visits to Mind, several visits to mental health charities in Scotland, more visits to her mental health patronages also in Scotland, a visit to Place2Be, and a guest editorship for a mental health series – all since her mental health kick started in September 2015 – that the best Kate can come up with to say is regurgitation of a buzzphrase that she’s used in two video messages, a speech, and her HuffPo article.

I know it’s nitpicking, but… Has she really not learned anything beyond what her speech writer wrote for her? I just… *sigh*.

And William… Oh my god, Google the actual statistics, it’s not that hard. Okay, calming down now. 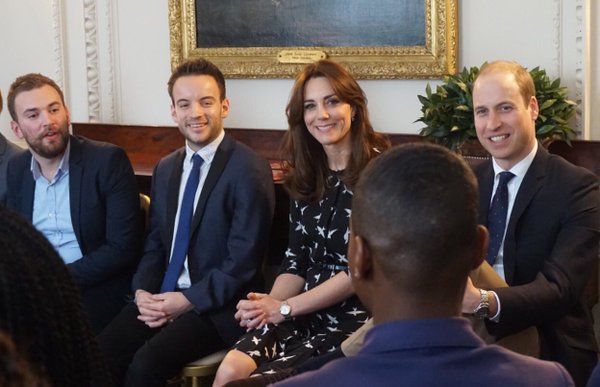 After the brief meeting, the foursome traveled to Kensington Palace where they met with schoolchildren from Dunraven School in Streatham, London. The Duke and Duchess of Cambridge listened to the children as they spoke about their experiences.

“The couple listened, clearly moved, as one young girl hesitantly talked about the issues she had suffered from after being diagnosed with autistic spectrum disorder.

“The pupil, who cannot be identified, said: ‘I didn’t really acknowledge the impact until I was eight when I started to suffer from extremely bullying. I felt like I couldn’t talk to anyone about it. Then a teacher came up to me – it was my ‘Neil’ moment – who told me I shouldn’t feel embarrassed.’

“William and Kate nodded enthusiastically as Jonny told her: ‘No, no, you shouldn’t.'”

After the twenty minute session, before leaving for a private discussion with bereaved families in a nearby room, William said:

“If I may add anything to the expertise of what Neil and everyone else here has been talking about, that is the importance of talking to each other. I really feel that we don’t listen and we don’t talk enough so I hope that if anything you take away from today is to talk amongst yourselves, to share your problems and communicate and be there for each other. Thank you all for being here today and sharing.”

Here is a short video of William’s and Kate’s last remarks before leaving. I think Kate says: “Thank you so much. Enjoy the rest of the discussion.”

Video: The Duke and Duchess of Cambridge at a discussion about mental health and suicide at Kensington Palace pic.twitter.com/6gSLkJrh8b

William and Kate then held a private meeting with people who had been bereaved by suicide. One woman who was there, Angela Samata, tweeted about her experience meeting William and Kate. She said:

“When the first thing Prince William says to you is,’Your Mum’s dinners look fantastic!’ you know it’s going to be a good meeting. It was such an incredible meeting with the Duke and Duchess of Cambridge. They asked some great questions and couldn’t have been nicer! …and everyone at @KensingtonRoyal Palace made us feel so welcome! Good day for those bereaved by suicide.Hope we did you proud! ❤️ Today it really felt like those bereaved by suicide had a voice!So good to see how closely William & Kate listened to our experiences”

Kate repeated her green Erdem “Allie” coat that she’s worn twice before (in New Zealand in April 2014 and for the Tour de France in July 2014).

I’ve come to the conclusion that I just dislike Erdem as a whole. I’ve never seen an Erdem dress or coat that I’ve liked. And I really dislike this coat as well. 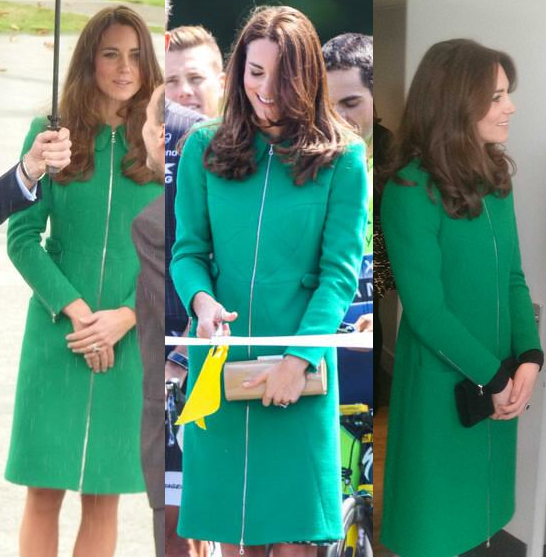 Kate also wore a Jonathan Saunders black swallow print dress (from 2012; $85) which I actually like (there’s my one positive for the day). Though I don’t understand why she wore black to talk to people about suicide.

Some statistics about suicide:

In the United States (from the American Foundation for Suicide Prevention):

In the United Kingdom (from a government report with statistics for 2013):

**Note: You know how I said William should have looked up the real statistics? Well that’s because, according to the above linked report, there are on average about 17 deaths related to suicide per day in the UK. Not the 5 William claimed. It’s great if William wants to take an active role in mental health issues and suicide prevention, but know the facts so you don’t spout false information!**

Risk factors and warning signs (from the AFSP):

There’s no single cause for suicide. Suicide most often occurs when stressors exceed current coping abilities of someone suffering from a mental health condition. Depression is the most common condition associated with suicide, and it is often undiagnosed or untreated. Conditions like depression, anxiety and substance problems, especially when unaddressed, increase risk for suicide. Yet it’s important to note that most people who actively manage their mental health conditions lead fulfilling lives.

Something to look out for when concerned that a person may be suicidal is a change in behavior or the presence of entirely new behaviors. This is of sharpest concern if the new or changed behavior is related to a painful event, loss, or change. Most people who take their lives exhibit one or more warning signs, either through what they say or what they do.

If a person talks about:

People who are considering suicide often display one or more of the following moods:

Specific things to look out for include: