Camilla, Duchess of Cornwall moved to tears by SafeLives visit

Camilla, Duchess of Cornwall vowed to “help in any way I can” after visiting SafeLives on January 27 to hear about their work to end domestic abuse. Camilla was moved to tears hearing stories from survivors and stories about women who lost their lives to domestic violence. 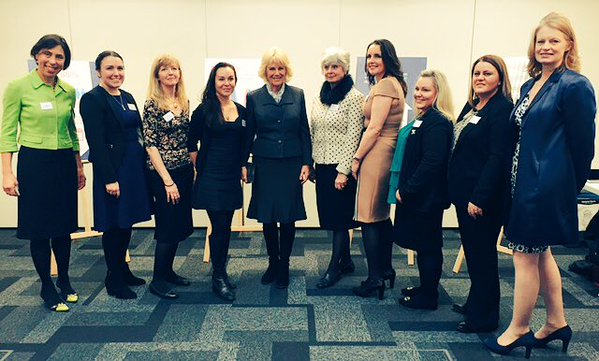 SafeLives, founded in 2005, is a national charity dedicated to ending domestic abuse in the UK, with a mission to make sure all people affected by domestic abuse can live safely. Though most high- and medium-risk domestic abuse victims are women and children, SafeLives also works with men. Just last year, SafeLives worked with over 67,500 high-risk victims and their 76,000 children.

Trigger warning for stories of abuse and discussion of domestic violence.

Camilla joined the group of survivors and friends and families members of those who lost their lives as they told their stories.

Rachel Williams, 43, described how her husband of 18 years, Darren Williams, shot her while at the hairdresser in 2011 after she tried to leave him. Ms. Williams showed the wristwatch she wore on the day she was attacked which had stopped at 2:26 pm. She said:

“After he hit me on the head with the butt of the gun I fell to the floor, I tried to cover my body with the reception desk but it was kicked away by Darren.

“I had the presence of mind to pull my legs up to my chest as he took aim and fired the first shot was taken by my leg, which has left me with life altering injuries, thankfully the second shot just missed my head.

“He then put the gun down to reload, I grabbed the gun, a supernatural strength enabled me to hold onto the gun. This watch with the face now frosted is the result of a battle as we fought for control of the gun, as my wrist was dragged in every direction over the floor.”

Mr. Williams was found six hours later having hung himself in an area of local woodland. Just six weeks after the attack, Ms. Williams’ 16 year old son Jack was found hanging in the same spot, having taken his own life.

Camilla speaking to Diana Parkes, the mother of Joanna Brown.

Camilla also heard the story of Joanna Brown, who was killed by her husband, British Airways Captain Robert Brown, in 2010. Ms. Brown’s best friend talked about the emotional abuse Ms. Brown suffered in the years leading up to her murder. After months of harassment and intimidation, Mr. Brown bludgeoned his wife to death with a claw hammer within yards of their children, ten and nine at the time, and buried her in a grave he had dug weeks previously. Mr. Brown was cleared of murder even though he admitted to it, but was found guilty of manslaughter on the grounds of diminished responsibility.

Camilla also met Celia Peachey, whose mother, Maria Stubbings, was strangled in 2008 by her abusive ex-boyfriend, Marc Chivers, after police mistakes which included removing a personal safety alarm from her home, despite knowing that Chivers had already served 15 years in Germany for the murder of another woman. Chivers, who had already served time in jail for assaulting Ms. Stubbings, throttled the mother of two with a dog leash at her home and left her body buried under a pile of coats in her downstairs bathroom. A later inquest found that Ms. Stubbings’ murder was contributed to by repeated police mistakes.

After comforting several of the women and family members, Camilla said:

“It’s so important that people like yourselves speak up otherwise we gloss over it. And this is too important an issue to ignore… Stories like this just have to be aired otherwise domestic abuse becomes a taboo subject. I want to do anything I can to help raise this issue. All of you going around and talking about it does create awareness.”

As she left the event, Camilla said: “I want to help in any way I can.”

“We are hugely grateful to both The Duchess of Cornwall and our victim group for taking the time to explore the impact of domestic abuse. It is a damaging and traumatic experience and to talk openly about their stories is remarkably brave… We are committed to finding out what works through evidence and listening to local services, and then making sure every family benefits. We need a huge shift in our response to domestic abuse.”

From the National Coalition Against Domestic Violence: “Domestic violence is the willful intimidation, physical assault, battery, sexual assault, and/or other abusive behavior as part of a systematic pattern of power and control perpetrated by one intimate partner against another.”

Some of the signs of domestic abuse include:

Domestic abuse, child abuse, rape, all of these topics are uncomfortable subjects to discuss which are mostly taboo and oftentimes get overlooked and go unreported because of that. People don’t want to report an incident of abuse for fear that it will embarrass them if people found out, fear that no one will believe them, or fear that reporting their abuse will lead to their abuser abusing them more. The more these subjects are openly discussed, the less taboo they become, and the more victims will seek and receive help.

Ending domestic and sexual violence and abuse is a subject that I support. I’m glad that the Duchess of Cornwall has supported it, and I hope that she continues to support it more in the future.

72 thoughts on “Camilla, Duchess of Cornwall moved to tears by SafeLives visit”