Prince Harry was the first young royal to make an official public appearance in 2016 when he attended the first day of the UK team trials for the Invictus Games Orlando yesterday, January 29, at the University of Bath. 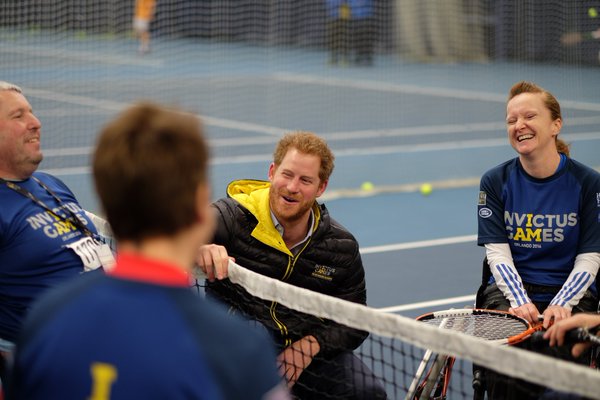 Harry spent just under two hours meeting the athletes and watching them compete in track and field and on an indoor tennis court.

The trials are being hosted at the university for three days and will see wounded, injured, and sick military personnel and veterans compete across 10 sports for one of the 100 places available on the UK team. The trials are being run by Help for Heroes with support from the Ministry of Defence and the Royal British Legion.

The 2016 Invictus Games Orlando are being held May 8-12 at the ESPN Wide World of Sports Complex in Orlando, Florida.

In case you needed an extra reason to swoon over Harry, he helped wheelchair athlete Anna Pollock (pictured above) when the wind tipped over her wheelchair. Anna said:

“I wanted a picture and I thought, if I don’t do it now I never will, so I went to get a picture [with Harry]. Afterwards I was putting my gloves on when the wind took me over.

“Harry said to me ‘What did you do that for?’

“He was so lovely to help me and he gives so much. He makes all the lads and the lasses feel important.” 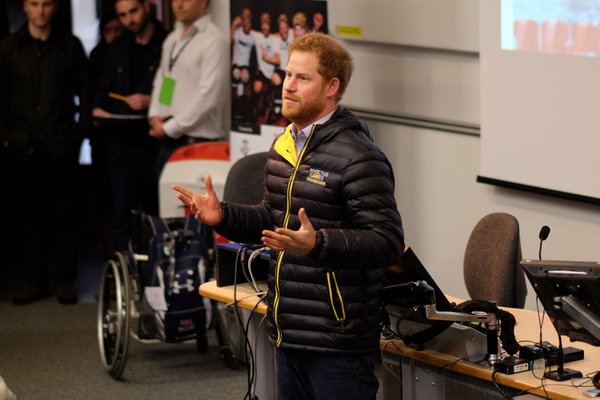 Harry gave a speech to the competitors, he said in part:

“The excitement is building not just here but also across the pond. You will be unbelievably amazed by the amount of support there is out there for you. You are now or will be ambassadors for the Invictus shirt, and the Invictus spirit. Wherever you go and whatever you do, spread the word. The most important thing is enjoy it, make the most of it and spread the word and appreciate how much support there is out there.”

Here is a video with part of his speech. No notes.

Harry also spoke about Henry Worsley, who recently died during a solo trek across Antarctica. Harry said: “He put his life on the line. This person was raising funds for the Endeavour Fund so people like you can do amazing things and rediscover yourselves. Thanks to him we have huge options for more and more people.”

Prince William released a statement after the passing of Worsley:

“Harry and I are very sad to hear of the loss of Henry Worsley. He was a man who showed great courage and determination and we are incredibly proud to be associated with him. Even after retiring from the Army, Henry continued to show selfless commitment to his fellow servicemen and women, by undertaking this extraordinary Shackleton solo expedition on their behalf. We have lost a friend, but he will remain a source of inspiration to us all, especially those who will benefit from his support to the Endeavour Fund. We will now make sure that his family receive the support they need at this terribly difficult time.”

By the way, someone wants you to think Harry hit it with a blonde, American PR woman named Juliette Labelle over the New Year in LA.

“Harry, 31, met Juliette, 22, on a private trip to her home city Los Angeles over New Year and they have kept in touch.

“A source said: ‘The Prince enjoyed hanging out with Juliette. She’s very much his type and they hooked up. She’s blonde, cool and well-connected. She’s also fun, confident and doesn’t mind showing off how sexy she is. And she has that boho free spirit he likes.’ […]

“[Juliette] claimed to The Sun: ‘I don’t know Prince Harry.'”

LOL! You can see some of her social media photos over at the Daily Mail.

There are no other events currently on Harry’s calendar. Kate still only has the one on February 7 and the “guest editing” gig in mid-February. William has nothing on his calendar yet.

Here’s a bit of a video of Harry’s event: