Prince William and Kate Middleton, Duchess of Cambridge, attended the Festival of Remembrance today, October 7th, at the Royal Albert Hall in London. The Cambridges joined many other members of the British Royal Family for the first time at this annual occasion. Prince Harry attended the Field of Remembrance event at Westminster Abbey on November 5th with Prince Philip which I did not cover in my most recent royal round up (as that event had not happened when I posted that article) so I will cover that here, too. 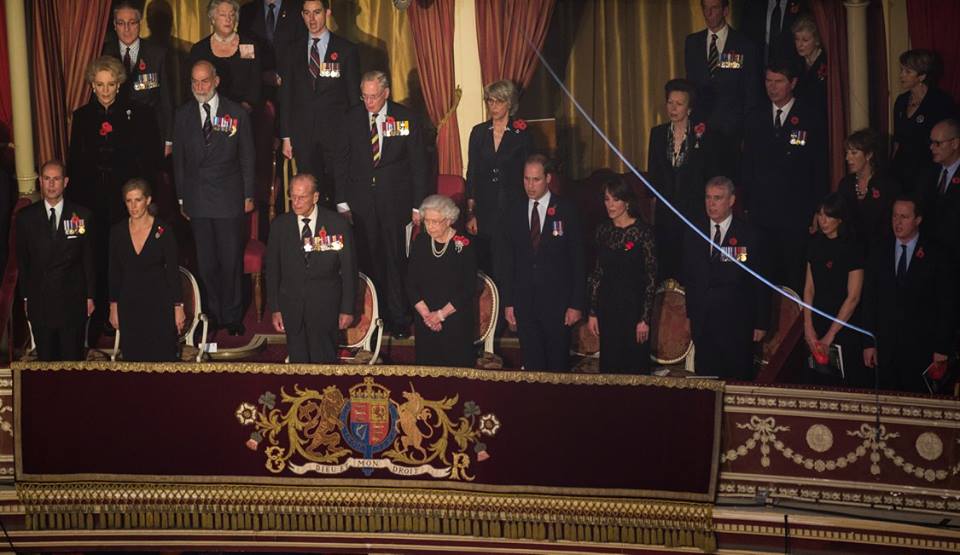 The Festival of Remembrance is an annual event that commemorates all those who have lost their lives in conflicts.

There were performances by Rod Stewart, Pixie Lott, Andrea Bocelli, and Gregory Porter alongside with the Central Band of the Royal Air Force, the Queen’s Colour Squadron, the Band of HM Royal Marines, and the Band and Pipes of the Brigade of Gurkhas. 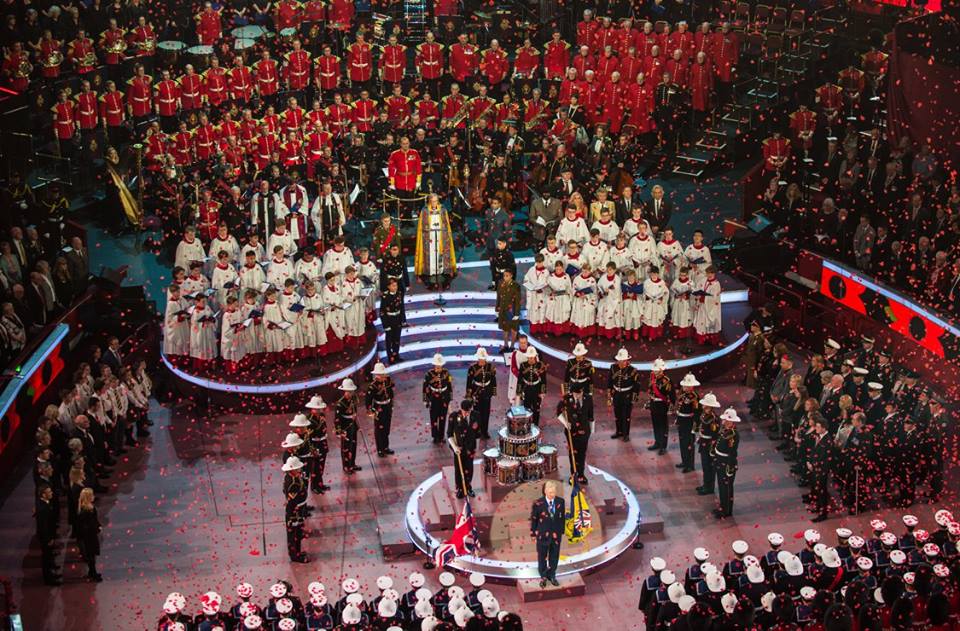 Most of the British royals came out for the event except for Prince Harry and Prince Charles and Camilla, Duchess of Cornwall (who are in New Zealand). We’ll go in order of precedence, starting with The Queen and Prince Philip (not pictured). The Queen wore Queen Alexandra’s diamond and pearl wedding brooch, diamond and pearl drop earrings made with pearls which were a wedding gift from the ruler of Bahrain, two pearl necklaces, and several diamond rings.

Prince William and his glasses got to sit next to the Queen since his father was not there.

As mentioned, William and Duchess Kate were there. It is the first time they have attended this event. Either they really are starting to take on a more formal role in the royal family, or they were simply filling in for Charles and Camilla.

As for fashion, Kate wore another Dolce & Gabbana lace dress ($3,175 at Net-a-Porter) similar to the “Guipure” lace dress she wore during the State Visit from China, but this one was in black. I prefer the purple one. This black one looks way too big on her in the midsection.

Kate also wore her art deco diamond earrings that are thought to be a wedding gift from Charles, her Anya Hindmarch “Maud” clutch, her Jimmy Choo “Aimee” pumps, and her Jewelled Poppy Brooch.

Prince Andrew was also there, sitting next to Kate.

Prince Edward and Sophie, Countess of Wessex were there, sitting next to Philip on the Queen’s other side. Sophie read a lesson during the event.

Sophie wore a dress from Roksanda Ilincic – the Contrast-cuff Crepe dress with the sleeves altered. Sophie wore LK Bennett pumps, her own jeweled poppy brooch, the Queen Alexandra’s Royal Army Nursing Corps badge (of which Sophie is Colonel-in-Chief), and carried a poppy clutch.

Princess Anne and her husband, Sir Timothy Laurence (not pictured), were there.

The Duke and Duchess of Gloucester were there. Birgitte wore some really pretty jewelry.

Princess Alexandra was also there. Also wearing some really pretty jewelry. I love those earrings.

Prince Harry (in his Blues and Royals frock coat) and his Ginger Beard attended the Field of Remembrance event on November 5th with Prince Philip (in his Royal Navy ceremonial overcoat).

They both planted ciphered crosses in front of two wooden crosses from the Graves of Unknown British Soldiers from the First and Second World Wars.

Philip and Harry toured the plots of poppy crosses, each inscribed with the name of a man of women who had lost their life, and chatted to veterans and families who were there in memory of their loved ones.

Tomorrow is Remembrance Sunday and the royals will be at the Cenotaph to place wreaths. Harry will place a wreath in his own right for the first time. Also, King Willem-Alexander and Queen Maxima will be there. I will cover that event tomorrow (or today, depending on your time zone – it’s still the 7th for me). For now, I’ll leave you with one last Harry shot.