King Willem-Alexander and Queen Maxima joined Queen Elizabeth II and other members of the British Royal Family for the National Service of Remembrance at the Cenotaph in Whitehall on Remembrance Sunday, November 8th. While the United States observes Veterans Day on November 11th each year, in the United Kingdom Remembrance Sunday is observed on the second Sunday in November. 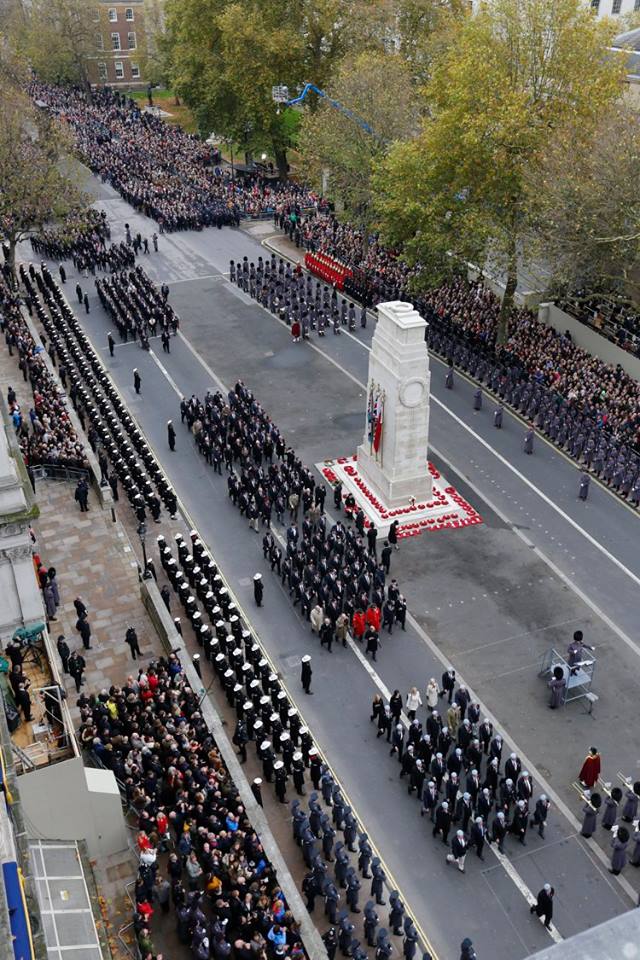 Veterans Day, Remembrance Sunday, Armistice Day, and Remembrance Day all serve to mark the anniversary of the end of World War I – which was formally ended at the 11th hour of the 11th day of the 11th month of 1918 – and to honor all service men and women who have given their lives to protect their countries.

A two-minute silence was observed at 11:00 AM before Buglers of the Royal Marines played the Last Post and the royals and party leaders laid wreaths. The Queen went first, followed by Willem-Alexander (whose message was signed by both the King and Maxima), then Prince Philip.

Prince William, Prince Harry, and Prince Andrew laid wreaths next. The three of them laid their wreaths at the same time in order to shorten the ceremony a tad to make it easier on the older veterans.

This marks the first time Harry has laid a wreath in his own right. He has previously laid a wreath on behalf if his father. The thought is that this marks Harry’s transition into full time royal status and that his pursuit of another career following his retirement from the military earlier this summer has fallen by the wayside. 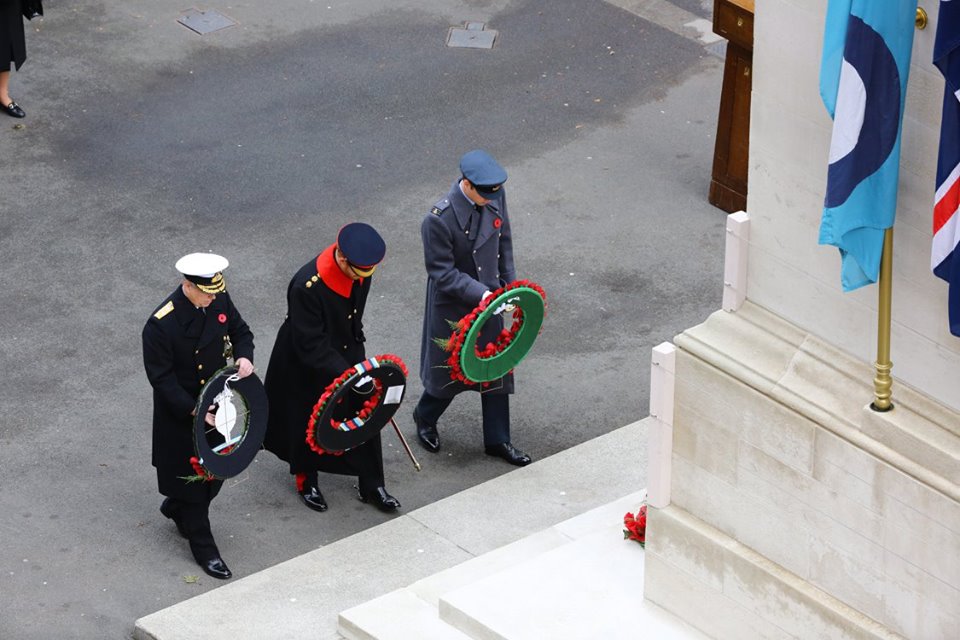 Prince Edward, Princess Anne, and the Duke of Kent also laid wreaths before the political party leaders – including Prime Minister David Cameron and Leader of the Labour Party/Leader of the Opposition Jeremy Corbyn – laid theirs. 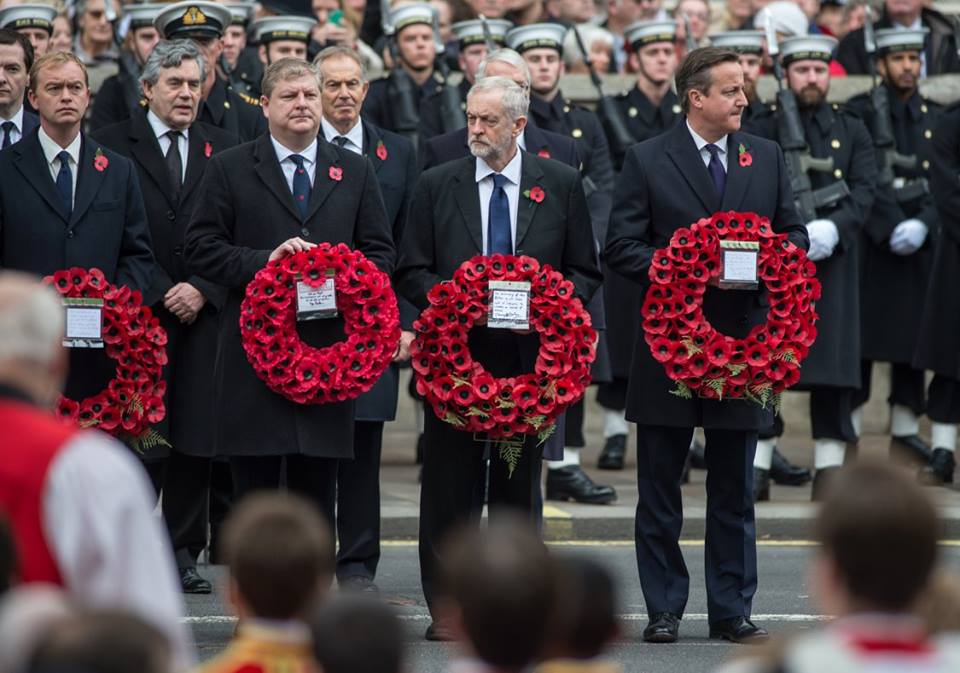 Here is a photo of Anne walking out to the Cenotaph.

Maxima, Kate Middleton, Duchess of Cambridge, Sophie, Countess of Wessex, and Sir Timothy Laurence (not pictured) watched the ceremony from the balcony of the foreign office.

Kate wore a double-breasted black coat with velvet patchwork by Alexander McQueen which is a custom coat with elements from other McQueen pieces (I think the patchwork looks odd; I wish the entire thing were velvet). Kate wore a new black hat with a “butterfly” design element (which I like) and netting over the face (two different types of netting, which looks odd). Kate also wore a poppy pin, her Annoushka Pearl Drop Earrings, and her black suede Mulberry Bayswater clutch.

I don’t know exactly what’s happening here. It looks like Kate is motioning for Maxima to move? That’s that “Here go ahead of me” arm motion, right? I don’t know. Also, Kate wore her hair down.

I wonder what Kate and Maxima talked about. And what they thought of each other.

Did Sophie and Maxima get to talk? I didn’t see any photos of them talking.

Here’s a better look at William, Harry, and Andrew.

Here is a video of part of the ceremony.

A couple more photos from the event including blind veterans with their guide dogs and the Chelsea Pensioners laying their wreaths. 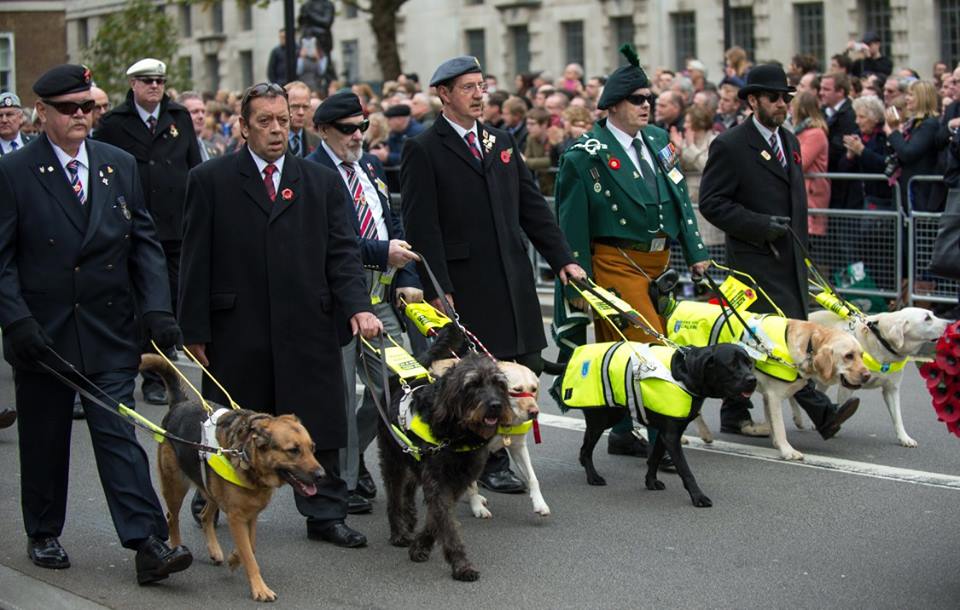 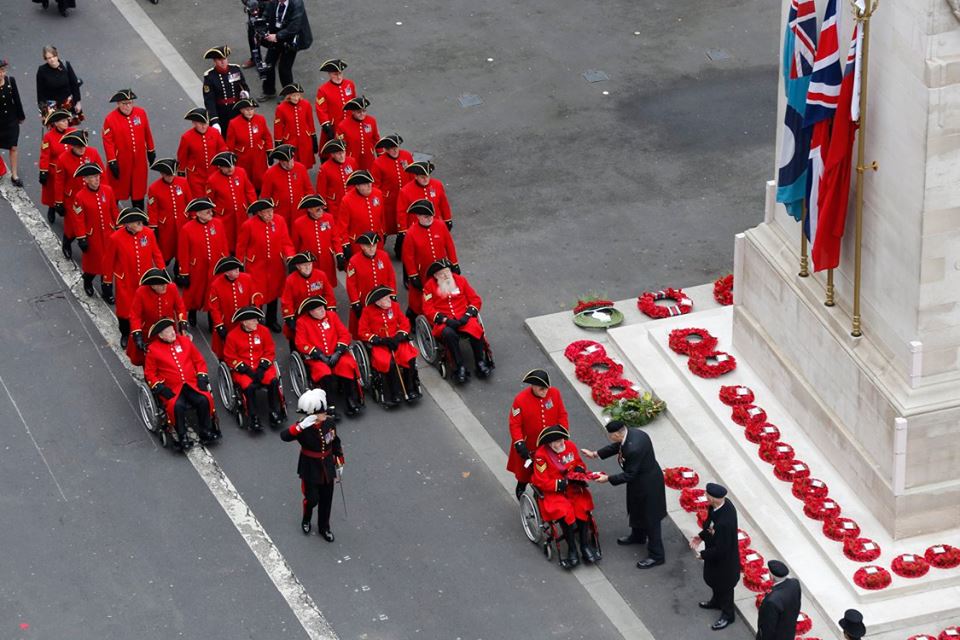