I was just talking about waiting for official pregnancy announcements, and lo and behold the Swedish royal court announced yesterday, September 4th, that Crown Princess Victoria is expecting her second child with husband Prince Daniel. Yay! 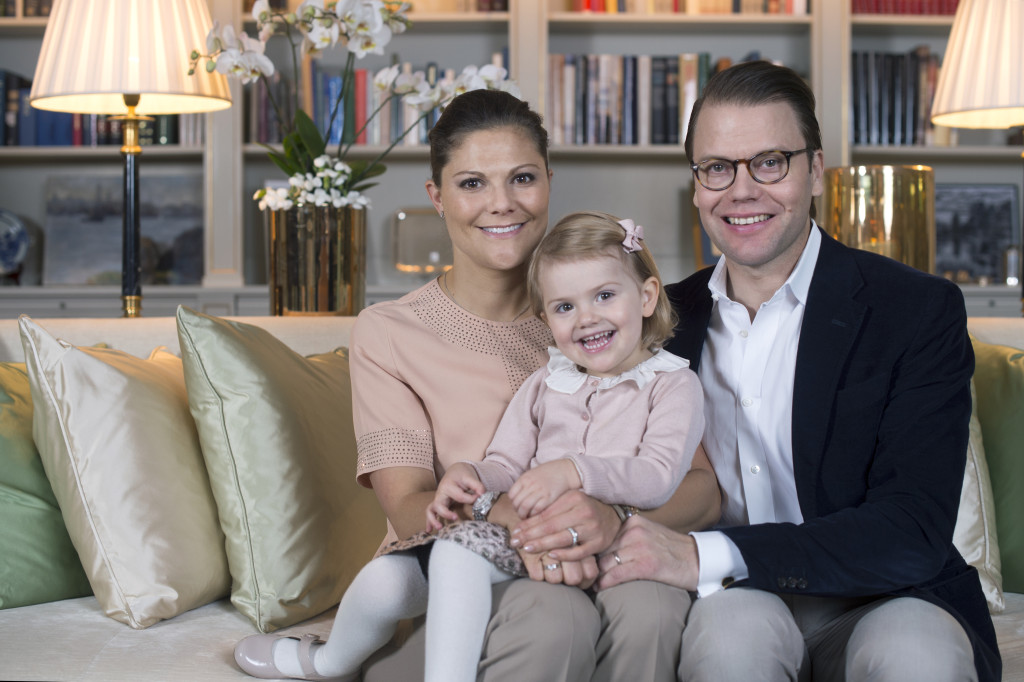 Victoria is about three months pregnant and due in March of 2016. She will continue with her fall schedule of royal duties without interruption. Victoria has a full schedule of events in September and October, including attending the opening of Swedish parliament on September 15th, and a trip to Peru and Colombia from October 18-23.

“The birth is expected to take place in March of 2016.

“No changes in the schedule of The Crown Princess Couple’s public engagements are planned during the fall of 2015.”

I’m so happy for Victoria and Daniel. Princess Estelle is such an adorable little girl and they seem like such loving parents. I can’t wait for the new little prince or princess. 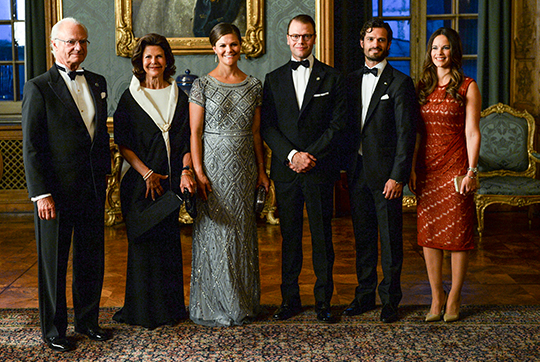 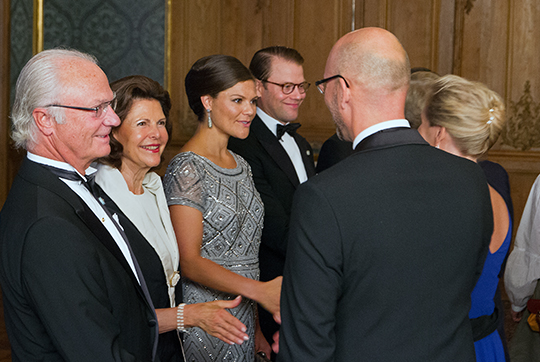 Sweden Dinner is a form of official dinner at the royal palace that was introduced in 2013 on the occasion of Carl Gustaf’s 40th anniversary on the throne. The non-tiara-ed Sweden Dinner should not be confused with the tiara-clad Official Dinner held twice a year.

Speaking of the tiara-clad Official Dinner, I can’t wait to see Sofia in a tiara again. That’ll be fun! 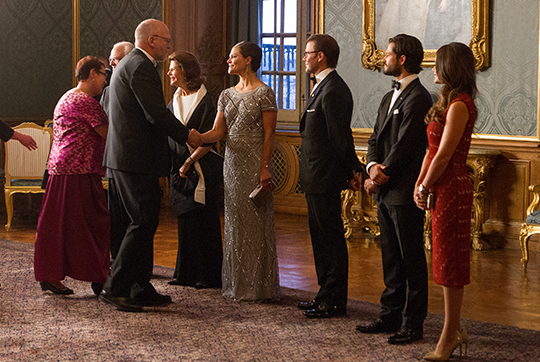 The approximately 200 guests to the Sweden Dinner included representatives from cultural, business, education, sports, and club activities from Sweden’s 21 counties and all provincial governors. Dinner took place in the White Sea – which is the castle’s old ballroom with ceiling frescoes from the 1700s, and oak parquet floor inlaid with birch, mahogany, and lemon added in 1845. 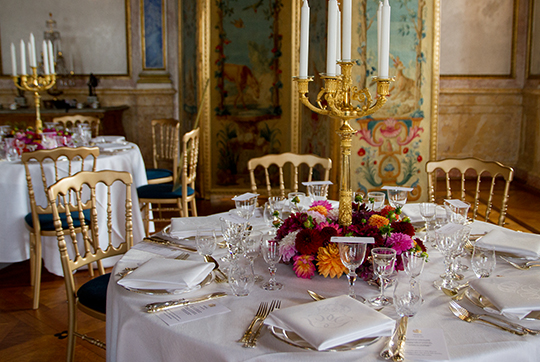 The tables were decorated with gilt candelabras circa 1820 from the reign of Karl XIV Johan. The glassware was a wedding gift to the King and Queen in 1976 from parliament. The flower arrangements consisted of dahlias from Brunnsviken.

Because I know some of you love hearing about the food as much as I do, for dinner the royals and guests dined on: Smoked reindeer steak with confit onions, horseradish cream, and rye bread crisps; butter baked salmon fillet with mushroom duxelle, almond crisp, grapes, and beurre blanc sauce; and for desert they had white chocolate mousse with blueberry ice cream, lemon creme, and dried blueberries.

I’m not a fan of blueberries, but the rest of it sounds delicious. 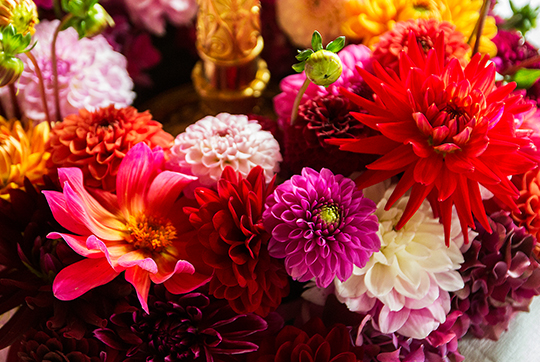 In terms of the fashion, Victoria wore an ice blue diamond-patterned beaded gown from Adrianna Papell, the “Beaded Mesh Gown” ($358). Sofia wore a rust colored, knit lace cocktail dress with a draping detail at the waist from House of Dagmar, the “Eleonora” ($649). Victoria wore her hair in a nice updo, while Sofia opted for some Kate Middleton-esque sausage curls.

I really like Sofia’s dress a lot, but that hair, though. I will say, at least Sofia’s hair is better than the hair on the model in the dress photo. 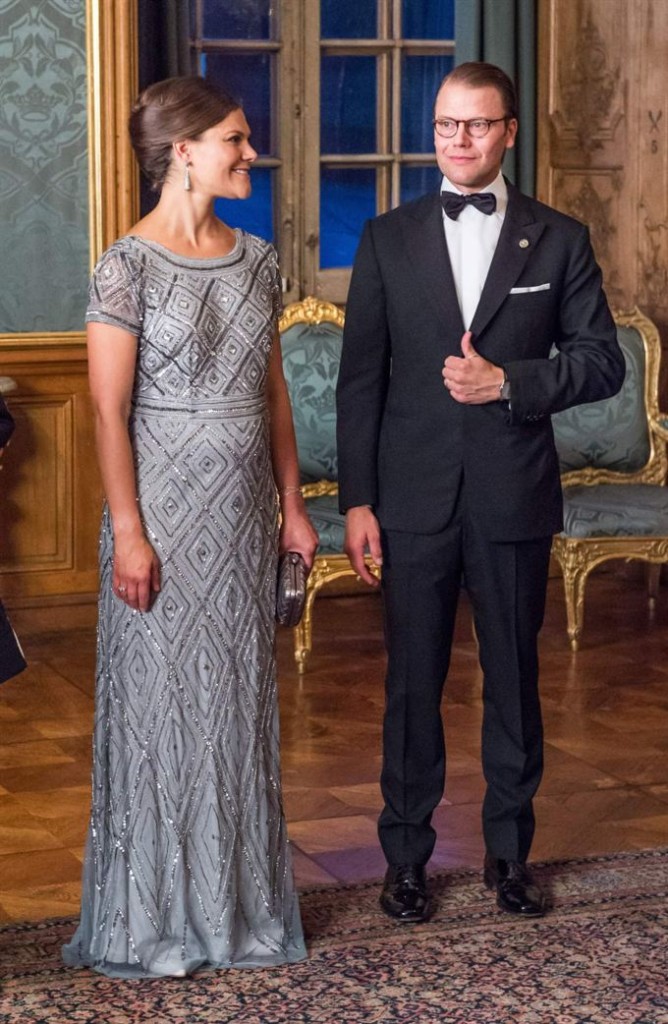 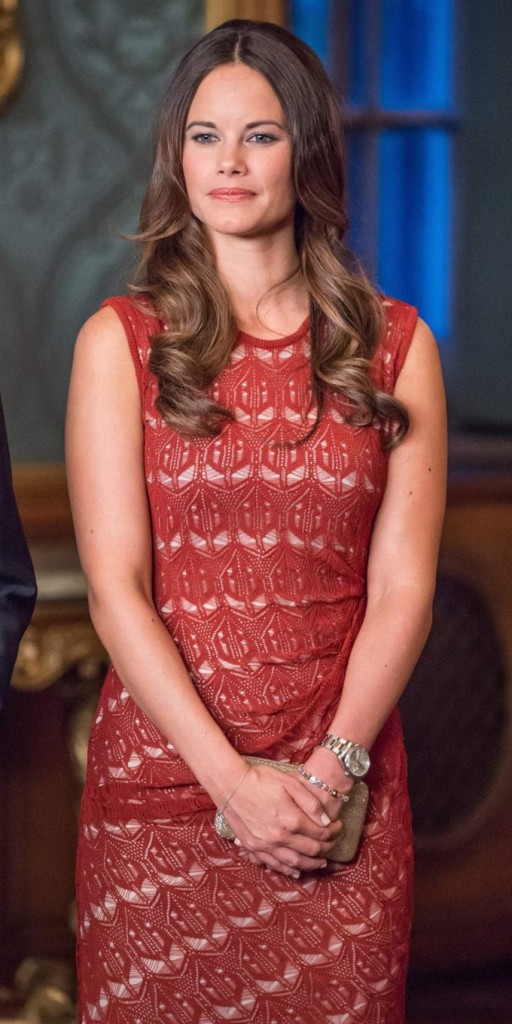