Royal Round Up: Prince William and Kate Middleton bits and bobs

This time of year is a slow period for all the royal families of Europe, as they are all on vacation (the the Swedes came back from vacation last week, which I’ll be covering later). The most interesting thing that has happened recently is the release of Kensington Palace’s letter about privacy and Kate missing a society wedding. Since it’s that time of year when the royals are absent, the press make due by writing about random stuff. So this post is a catch-all for some Cambridge related articles.

Richard Kay has written a lengthy article for the Daily Mail about Kate Middleton, Duchess of Cambridge becoming “the invisible Princess”.

The Middleton Rules? “[The phrase] was used to describe an initiative of William’s to ensure his fiance never endured the kind of treatment meted out to his mother, Princess Diana. … It went beyond merely fending off the pesky paparazzi and involved the use of expensive media lawyers, and the meticulous planning of future royal duties and the upbringing of the children they were planning, to create an extraordinary protective bubble around the family. In short, the Middleton Rules would establish that the middle-class values embodied by Kate’s family — and which throughout the years he dated Kate the Prince had found so appealing — were not abandoned the moment she was upgraded from girlfriend to Duchess. They were also to prevent Kate being strait-jacketed into the royal way of doing things and allow her to strike a balance between her duties as a wife and mother and the expectation that she would undertake official engagements.”

The Queen and Charles had no say in the Middleton Rules: “At the time, the rules were presented to the Queen and Prince Charles by William as a fait accompli.”

Kate hates being compared to Diana? “[Kate] loathes the constant comparisons with Diana — especially when these emanate from within Palace walls. Living up to the public image of the late Princess, let alone William’s near veneration of his mother, has proved a significant strain at times. Indeed, I am told it has even been murmured that when the time comes, she might not want to be Princess of Wales at all — which could mean the title has gone for ever.”

Kate doesn’t get along with any of the royals: “One reason why Kate has relied so much on her parents is because there has been no one on the Windsor side to guide her through the royal maze. … Some say the reason why William was happy to relocate to the countryside was partly because Kate still finds it uncomfortable to be in the presence of other royals and the stiff formality of their palaces.”

Basically, the whole article gives examples proving that William and Kate dictate what they do, not the Queen or Charles. So the excuse of “The Queen/Charles won’t let them do more” does not hold water. Also, I highly doubt Kate loathes being compared to Diana considering how much she emulates Diana’s wardrobe and the way she dressed William.

Here’s another article, from the Daily Beast, about why Kate has “disappeared” from public and social events. Basically the gist is Kate is trying to avoid the “if she’s fit enough to party then she’s fit enough to work” comments. Also, according to their sources, “Kate’s strategy is to very slowly build up the number of engagements to which she is committed throughout the autumn. For example, there will be more events in Kate’s diary in October and November than there will be in September.” Kate’s going to need to fit in lots of engagements in October and November to offset the criticism she’ll get if she’s planning on heading to Mustique in November.

There are reports that William and Kate will go on a royal tour to the Caribbean next year – perhaps early next year during the normal Middleton family Mustique holiday which is why they rearranged the trip to take place this November. Both People and the DM are reporting this, though they have slightly conflicting reports. The DM says the Cambs will take Prince George and Princess Charlotte with them on the tour, but People says Will and Kate will leave the kids at home. Who knows what’s true but People has seemingly been Jason’s go-to paper.

Prince William has written (“written”) the preface to a new biography of the Queen called Elizabeth II: The Steadfast. He said in part:

“I think I speak for my generation when I say that the example and continuity provided by The Queen is not only very rare among leaders but a great source of pride and reassurance. […]

“All of us who will inherit the legacy of my grandmother’s reign and generation need to do all we can to celebrate and learn from her story. Speaking for myself, I am privileged to have The Queen as a model for a life of service to the public.” 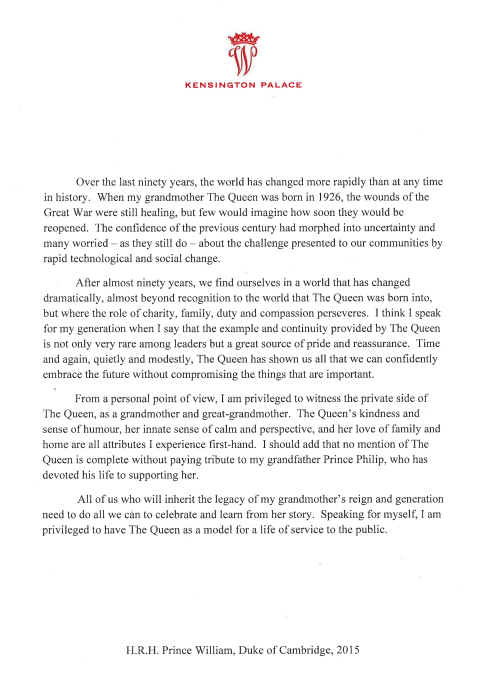 According to a poll by vouchercloud.com (via the DM) of British parents, Kate Middleton is the best female role model for children. HAHAHAHAHAHAHAHAHAHAHHA

Princess Charlotte has received another gift, this time a “Maple Leaf” tartan pinafore dress from the Sons of Scotland Pipe Band.

A reporter at Mashable lived as Prince George for a week. Seriously.

Richard Palmer had some interesting thoughts the other day:

1) “Anyway, people keep approaching me and making negative comments about the Duchess. I think the Brits might be falling out of love with her.”
2) “My sense, from listening to fellow commuters, radio phone-ins etc is that KP’s letter about paps and photos in public places has backfired.”
3) “Anyway, it’s only anecdotal but that is my sense. KP press office has not wanted to engage on the subject since.”
4) In response to the question, What kind of things? – “‘What does she expect?’ ‘She’s bound to get that sort of attention?’ ‘They always pull out the Diana card.’ etc etc..”
5) “Whatever people think about her, there is still interest in Kate. She’d really have to worry if she got to Andrew’s position.”

I think it’s interesting that the KP press office hasn’t wanted to talk any more about the privacy letter. Why ever not? Do they, too, think it backfired? Did they not get the reaction they were hoping for?

Some of the criticism of Palmer’s comments is that the media is just mad because they want to make money off of William and Kate and the kids and by not doing engagements or releasing photos of the kids, the press is not making money. And that as soon as Kate does something (like show up to the October State Banquet in a tiara) the press will love her again.

The first part is true. Of course the press want them to be out and about in order for them to make money. It is a business after all. What will be most telling is if the fawning comes back as soon as Kate does appearances again, or if the criticism continues. Just because the press want to make money doesn’t mean their criticisms aren’t valid. But if the press goes back to fawning at the first public appearance, then we can call them on their BS.

116 thoughts on “Royal Round Up: Prince William and Kate Middleton bits and bobs”