Princess Charlotte to be Christened July 5

Kensington Palace confirmed this morning that Prince William and Kate Middleton, the Duke and Duchess of Cambridge, have scheduled Princess Charlotte‘s Christening for Sunday, July 5. Charlotte will be Christened by The Archbishop of Canterbury, Justin Welby, at St. Mary Magdalene Church on the Sandringham estate. 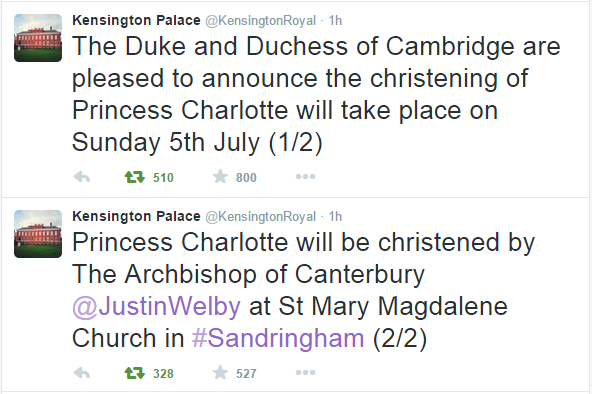 The Christening will be private as with Prince George (unlike Princess Leonore or Prince Jacques and Princess Gabriella), but photographs will be taken of the royal family and released afterwards (just like with George). Though the ceremony will be private, there is likely to be a small gathering of press and public outside the church to watch the royal family walk in (like there is at Christmas).

The godparents will not be announced until closer to the Christening. People still think Prince Harry and Pippa Middleton are frontrunners.

Charlotte will of course wear the same silk and lace Christening gown as George, and several recent royals, which is a replica of the Christening gown worn by Queen Victoria. The replica was made by Angela Kelly (the Queen’s personal dressmaker) because the original gown was becoming far to fragile to use.

I am still holding out hope that we will get a family photo like the ones we got with George (except taken by a professional) between now and July 5, but considering the Christening is only a month away, I’m kind of doubting that now (anything the Cambridges can do to keep Charlotte the Unseen out of sight, amirite – skip the first family photo and go straight to the Christening; one less photo out there of The Unseen).

PS. I wonder if Harry will be there. He is supposed to be heading to Africa for three months this summer, but I don’t know when he is leaving. Maybe he’ll wait to go until after July 5, or he’ll fly back specifically if he leaves sooner? Is it possible William and Kate scheduled Charlotte’s Christening a bit early to accommodate Harry’s schedule? Charlotte will be two months and three days old at time of her Christening, unlike George who was three months and one day old at the time of his.

82 thoughts on “Princess Charlotte to be Christened July 5”