Prince William and Kate Middleton issue privacy warning to the press; Harry gets a kiss in OZ

Prince William and Kate Middleton, the Duke and Duchess of Cambridge, via their communications secretary and the Norfolk police, have requested “acts of harassment and breaches of privacy” from “professional photographers using long distance lenses” to cease while they stay at Anmer Hall this summer with their two children, Prince George and Princess Charlotte.

The Norfolk police handed out warning letters to the media and people working on or around Sandringham to reiterate William and Kate’s requested position of privacy following a “number of intrusions” into their privacy.

A Kensington Palace spokeswoman said (via BBC): “The warm-hearted and understandable interest in the Royal Family and the Duke and Duchess of Cambridge needs to be balanced with their right to private family life – this is especially important for a family with very young children.” 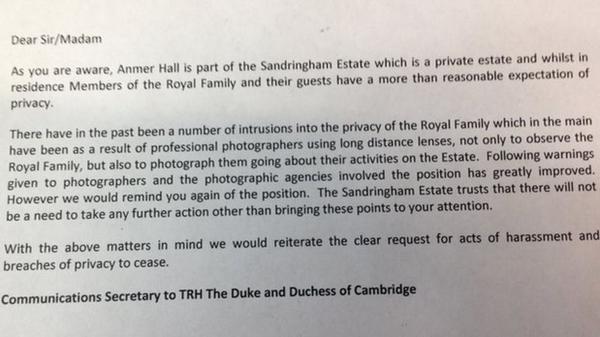 As you are aware, Anmer Hall is part of the Sandringham Estate which is a private estate and whilst in residence Members of the Royal Family and their guests have a more than reasonable expectation of privacy.

There have in the past been a number of intrusions into the privacy of the Royal Family which in the main have been as a result of professional photographers using long distance lenses, not only to observe the Royal Family, but also to photograph them going about their activities on the Estate. Following warnings given to photographers and the photographic agencies involved the position has greatly improved. However we would remind you again of the position. The Sandringham Estate trusts that there will not be a need to take any further action other than bringing these points to your attention.

With the above matters in mind we would reiterate the clear request for acts of harassment and breaches of privacy to cease.

Communications Secretary to TRH The Duke and Duchess of Cambridge

I feel like William still has no clue about how to handle anything. The more he fights (and threatens) the media and the public, the more the media and the public are going to want to piss him off. He gets so angry and lawsuit-y that it is funny at this point to watch him blow a gasket. So guess what? The anarchist in me wants Will and Kate to be photographed while out and about in Norfolk – like when Kate goes shopping (because she will) – that way they can’t complain because they are in a public space. Why? Because it will be funny to watch William go mental and threaten people and then have the press say, “Take a seat, William, no one has any reasonable expectation to privacy when outside”.

I realize that everyone wants and deserves privacy, but whenever I hear about anyone fighting so hard and getting so angry over their privacy my first thought is always “What are you hiding?”

I want to take a minute to talk about the upcoming program for the blog. Due to the Cambridge hoopla, I missed the Hot Guy for May, this past Sunday’s royal round up, and several events from the European royal ladies. For the next week or so, I am going to devote articles to the royal ladies that I missed the last week and a half.

And I’ll be doing some royal wedding features as a lead-up to the Swedish wedding in June.

There were also several article ideas that you guys suggested that I never was able to get around to, that I will also be doing.

That is my plan for the next several weeks. Hopefully the Kate hoopla will die down and stop bumping the other royals. But of course if there is any Kate news, I’ll post that, too.

Since I am kind of sick of posting the same Kate/Charlotte photos over and over, I’ll leave you with some Prince Harry in Australia.

Harry visited Sydney following his month-long Australian military attachment where he visited Macquarie University Hospital to talk to wounded soldiers and the Sydney Opera House where he met with children from St Marys South Public School and did a walkabout meeting fans. He took lots of photos with the fans which is nice to see, especially since he’s said publicly that he hates selfies. Harry got several kisses, too.

The blonde in the tiara is 21 year old Victoria McRae (who has a daughter named Emma who looked adorable in her white dress, pink coat, and pink star wand). McRae asked Harry to marry her (he said he would have to think about it) before going in for a kiss. He told her she could kiss him on the cheek, but she went in for the lips and stole a kiss.

233 thoughts on “Prince William and Kate Middleton issue privacy warning to the press; Harry gets a kiss in OZ”