Now for royal baby stuff. Prince William and Kate Middleton are now finally at Kensington Palace ahead of the birth of their second child, having spent much of their time at Anmer Hall and last weekend at Middleton Manor in Bucklebury. Coincidentally, KP revealed this morning that William will basically be taking six weeks paternity leave (though he will do a few engagements in May) after completing the latest stage of his air ambulance pilot training.

William finished his training early and is not required to start the next stage of training until June 1, so he is taking the time off as unpaid leave.

The KP spokesman said: “The Duke of Cambridge has completed the first phase of his in-work air ambulance helicopter pilot training with Bond Air Services earlier than anticipated.

“This is due to a combination of The Duke performing well in the various modules and having very good flying conditions that allowed flight training and assessment to progress more quickly than had been planned.

“His final block of in-work training requires an uninterrupted three week block of working time and the availability of the new EC145 helicopter that will be used for missions. This has always been scheduled to commence on 1st June, following a pre-planned period of official royal engagements in late May, details of which will be announced in due course.

“As he now will not have any further training to complete after returning from paternity leave, he will not return to duties with Bond until that time, and will remain on unpaid leave until then.”

I think it’s interesting that William couldn’t take and pass his pre-training exams on time and his start date had to be pushed back, yet he is able to finish this round of training early. We all know William doesn’t actually like working. My gift to William on finishing his training early is a huge dish of side eye.

KP also announced that Prince Harry, who will be in Turkey on the 24th and 25th for the Gallipoli campaign commemorations with Prince Charles, will be in London on the 26th to attend and present medals at the London Marathon. He will return to Australia on the 27th. So if Kate gives birth before then, Harry will actually get to meet Baby Cambridge 2.

In Kate news, she was photographed taking Prince George to Bucklebury Farm Park on Sunday, April 19. The pics were published in the NY Daily News. I have only seen the (below) cover pic with Kate holding George, not any inside pics. The photo looks photoshopped to lighten the coloring. 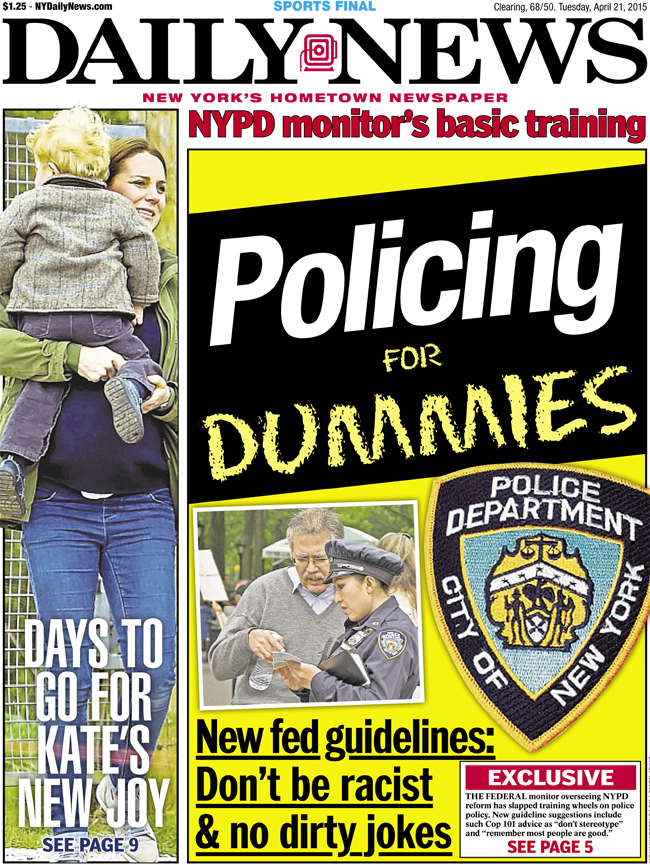 Remember those photos of Kate and George at the park from last week? Well OK Magazine bought some of the photos and posted them online (go here to see). I hadn’t seen some of the photos OK published so I was surprised when in some of the photos the photographer got REALLY close to Kate and George. Like, the photographer must have been really physically close to them. Photo number 11 in OK’s album, where George is hugging a girl… yeah that is not zoom, the photographer was right there next to him taking that photo. There is no way Kate did not know that there was a photographer there. I know most people on here thought Kate knew there was a photographer (and thought she knew who it was), but there are some people elsewhere who still think it was a long lens. It can’t be. From the angle of the photos, it can’t be. Kate knew someone was taking photos, and she most likely knew who it was. This was basically a low budget photocall. **I know we had pretty much established this last week, but since OK’s publishing is new, I wanted to reiterate.

Police were searching the area immediately outside the Lindo Wing this morning (EST; early afternoon GMT). Nothing came of it today, and it is well past 10PM in the UK so nothing will come of it until at least 8AM UK time tomorrow (that’s, what, 3AM EST).

A couple of you mentioned having a feeling the baby would arrive on Wednesday, and I’m getting that feeling, too, but only because of the Lindo Wing searching. I wasn’t feeling Wednesday until news of the searching AND it became too late in the day for a possible Tuesday birth (it’s now past midnight in the UK). But I’m hoping the baby doesn’t arrive until after this weekend.