Royal Round Up: Kate Middleton and the royal baby press mania

Here is a round up of some recent articles (and betting) about Kate Middleton and the royal baby.

* Ladbrokes/the betting public think the royal baby will be a girl (8/15) named Alice (5/4), and Kate will wear pink (4/1) when leaving the hospital. So not a boy named Philip with Kate wearing red then? What I find super funny though is the picture they used for the royal baby betting sections: a pic of Kate and HARRY. Seriously, Ladbrokes, seriously? [Ladbrokes]

* Katie Nicholl wrote a sycophantic fluff piece about how Prince William and Kate are just so private and normal and want to protect their family from the horrible media and evil public. They just want to be normal, you guys, leave them alone!

Nicholl keeps insisting that Will and Kate JUST finally moved in to Anmer Hall… which we know is BS since they and the Midds spent weeks there during and after Christmas. Also, Nicholl said last summer that Will and Kate were going to spend the summer at Anmer, so they had already moved in by then. I don’t know why Nicholl keeps insisting they JUST moved in.

This whole article just goes to show how messed up William is. He wants to isolate himself away from the press, public, and royal family. [Daily Mail]

* When Kate went to that reception at the Goring Hotel, she spoke to a luxury travel agent named Claudia Gordon who asked Kate about Prince George. Kate reportedly told Gordon that when Kate told George William was in China, George went to the china cabinet and opened it and said, “Daddy is not here.” Because while 21-month old George doesn’t know his geography, he apparently knows what a china cabinet is. My question: If Kate said “Daddy is in China”, and they had been calling the dishes china (which must be the case or else the entire story doesn’t make sense), why did George look in the cabinet and not at the actual dishes? I mean, if he’s taking things literally then he should have taken things really literally and thought daddy was in the actual dishes, right? Am I overcomplicating a story Kate probably made up? Yeah, I’m overcomplicating a story Kate probably made up. [Hello]

* The press is trying hard to make William’s possible “mad dash” to be at the hospital for the birth into a thing. They mentioned William would most likely be working in Norfolk when Kate goes into labor in London and he would have to drive two hours to be with her for the birth. And now the press is saying William might be making his “mad dash” from the Cenotaph (in London) instead because he is scheduled to be at the official commemorations of the 100th anniversary of the Gallipoli and Anzac campaigns, along with the Queen and Prince Philip, on April 25 (Kate’s supposed due date). If Kate’s due date is the 25th, I think it’s interesting William scheduled work for that day (he committed to the event in February, well after he would have known the due date). [Daily Mail]

* I wonder how much Carole Middleton paid for this article in the Telegraph – it’s one giant advert for Party Pieces. [Telegraph]

* Seriously, the Telegraph is up Carole Middleton’s butt. Here is another sycophantic fluff piece about how great Carole is, and how she is more involved in George’s life than Princess Diana ever would have been, and how the the creepy codependent relationship Kate has with Carole is totally normal. [Telegraph]

* The CEO of Silver Cross prams, Nick Paxton, is kissing major Cambridge bum. He said: “The Duchess of Cambridge is certainly helping us with our product development. We supplied a couple of extra accessories including an insect net. It was a very good summer when Prince George was born. Our head of design went to the Middleton family home and presented it to the Duchess’ mum. We did a full demonstration so that the product was safe and used correctly. [Designing the future King’s pram is] a huge honour. Safety is a top concern in all of our products but obviously for a future monarch. It was made in the same manner as all of our products, it was just made with that extra special ingredient for an special extra customer.” Insect nets are now standard on all Silver Cross prams, which, I mean, cool, but you’re really giving the credit to Kate and Carole Middleton? [Hello]

* Here is an article about Kim Kardashian (Kate’s soul sister) partnering with Alice Temperley (one of Kate’s regular designers) for a clothing line. I don’t care about that, what I care about is the quote (which may be old, but I’m going to comment anyway) Temperley gave about Kate. She said: “The Duchess is an inspiration, a brilliant ambassador for British fashion. She mixes up designer and high street, the perfect modern woman.” Can we stop calling women “modern women” for simply wearing clothes. So a woman rewears clothes or mixes designer and high street; big deal. I’m not saying women can’t love fashion, but a “modern woman” is not defined solely by her clothes. [Mirror]

I really hope they hire a professional to take the photos this time – no more of Michael Middleton’s crappy photography. PS. I never noticed the second dog in this photo lying behind Kate. 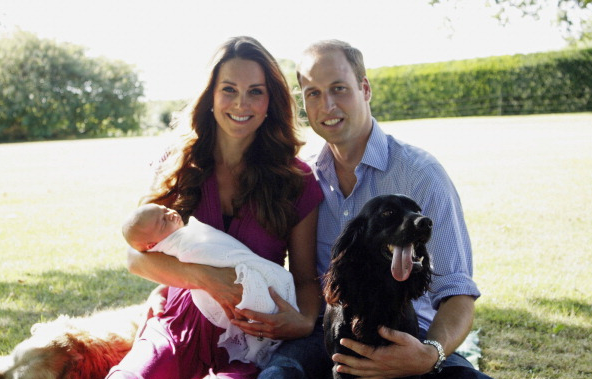 161 thoughts on “Royal Round Up: Kate Middleton and the royal baby press mania”