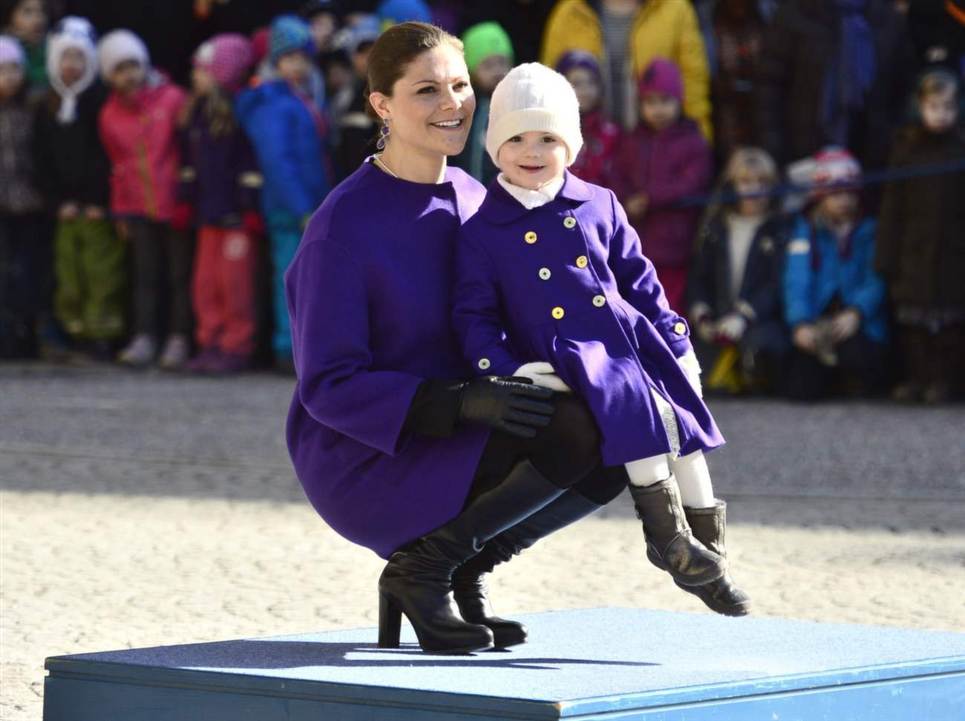 Thursday, March 12, was Crown Princess Name Day in Sweden and Crown Princess Victoria and Princess Estelle celebrated in the Inner Courtyard of the Royal Palace in Stockholm. The Music Corps and the Army Band played. Lots of people came out for the festivities and Victoria spent time greeting the crowd. The Life Guards were a part of the celebration and afterward presented Estelle with a rocking horse. Estelle also received a toy sword.

I always love seeing Estelle.  She seems like such a happy kid; and she and Victoria seem to have a great relationship. 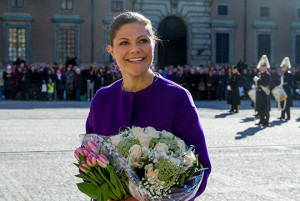 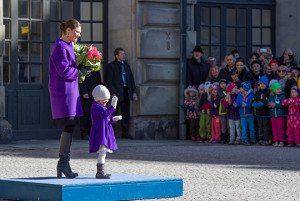 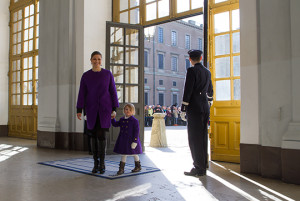 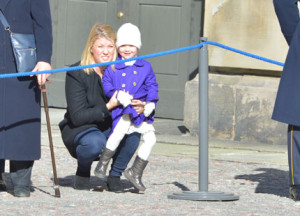 The blonde is Estelle’s nanny. 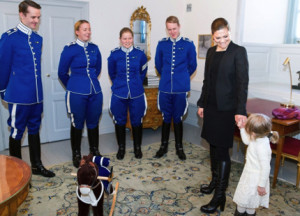 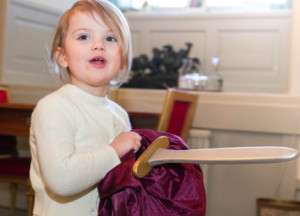 As per usual, Queen Letizia was out and about this past week, doing her thing. On Tuesday, March 10, Letizia was out with King Felipe in the city of Zaragoza visiting the ‘Goya and Zaragoza’ exhibition at the Camon Aznar Museum. The exhibition features early work by Fancisco Goya, a Spanish artist who was raised and trained in Zaragoza before moving to Madrid. For this visit, Letizia brought back a few staples in her wardrobe: Uterque multi-colored tweed jacket, Hugo Boss black trousers, fuchsia blouse, and Magrit black peep-toe pumps. Leti’s earrings were her Elena C mini butterfly diamond earrings.

On Wednesday, March 11, Letizia and Felipe were at a different art exhibit, this time the “Teresa of Jesus: The proof of my truth”, about the life and work of Saint Teresa of Avila, at the National Library of Spain. Leti changed things up and wore a navy jumpsuit from Mango, the Zip Long Jumpsuit from the Spring 2015 collection (£49.99). Leti accessorized with metals: gold Magrit strappy heels, a silver clutch from Carolina Herrera, a wide bronze belt, and the gold earrings from the Colombian reply dinner. I’m not sure I love this look (I don’t like the shoes) but it sure is nice to see Leti switch things up with a jumpsuit.

Thursday, March 12, saw Letizia and Felipe attending an “In Memorium” tribute concert at the National Music Auditorium for victims of terrorism in Spain. This event has been held annually since 2003. Letizia wore black in honor of the somber nature of the event. Choosing a black sheer blouse with a sequin rose pattern by Felipe Varela, Hugo Boss black trousers, black Hugo Boss clutch, and black Carolina Herrera heels. Leti’s earrings were citrine and diamond. I love the loose, wavey hair choice.

I’ve already covered Camilla, Duchess of Cornwall‘s appearances at Commonwealth Day service and the Service of Commemoration for the end of the Afghan combat, but Camilla was out and about three other times during the week. Also on March 9, Camilla joined Prince Charles for a reception at the US Ambassador to the UK’s residence ahead of their US tour. Camilla joined the All Lace Dress Club in her navy lace cocktail dress.

On March 10, Camilla attended an event for The Big Lunch where she presented the awards and they had a cake. Camilla wore another navy dress with white collar. On March 11, Camilla attended the Cheltenham races where she presented the winner of the Queen Mother Championship. She wore a brown-ish coat and accessories. Her children, Tom Parker Bowles and daughter Laura Lopes, were there with her.

Did anyone catch the CNN Spotlight interview with Prince Charles? I watched it last night and it was really nice seeing him talk about Camilla. Yes, he did this interview for PR not only for himself, but for Camilla, but he seemed to me to really enjoy speaking about her. He talked about how she has taken on her role, and taken up causes she feels passionately about. He also talked about how she encourages him, saying: “It’s always marvelous to have somebody who, you know, you feel understands and wants to encourage. Although she certainly pokes fun if I get too serious about things. And all that helps.”

So… I have to ask, is this subtle shade at Princess Diana for never understanding and encouraging him? 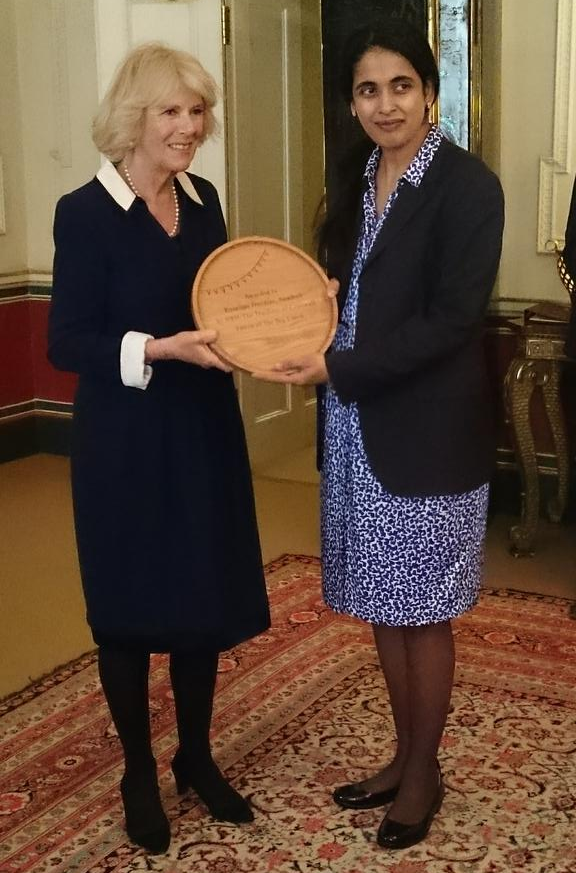 The Prince of Wales & Duchess of Cornwall join Ambassador & Mrs Barzun at Winfield House ahead of #RoyalVisitUSA pic.twitter.com/4c6HSKF9nu

Queen Maxima kicked off the Week of Money (where children are taught the importance of learning to deal and cope with money responsibly) at the OBS West Primary School on March 9 in Capelle aan den Ijssel, The Netherlands. Max wore a taupe coat and dress and black accessories.

Queen Mathilde joined her husband King Philippe for an audience with Pope Francis at the Vatican.  Man, Mathilde is getting all around in those crutches.  First a trip to the US and now Vatican City.  Way to go, Mathilde!

Yesterday, CP Mary handed the Champions for Change Award to @MabelvanOranje for her efforts to end child marriages. pic.twitter.com/YJX7FtX8ch

Crown Princess Mary was in London on Friday, March 13, for the Champions For Change Awards. Mary presented an award to Princess Mabel of Orange-Nassau from The Netherlands. Champions For Change, in association with the International Center For Research on Women, strive to raise funds for women to help abolish poverty on a global scale. “ICRW research identifies women’s contributions to their communities and the barriers – like HIV, violence, lack of education – that prevent them from being economically stable and able to fully participate in society. [ICRW] provide a path that creates the conditions under which not just one woman, but millions of women can benefit.”

Link with more photos: Daily Mail. Thanks ArtHistorian for reminding me of this!

Crown Princess Mary was in London Thurs. to present the Champions for Change Award to Princess Mabel of Orange-Nassau pic.twitter.com/p9IwvKdDJS