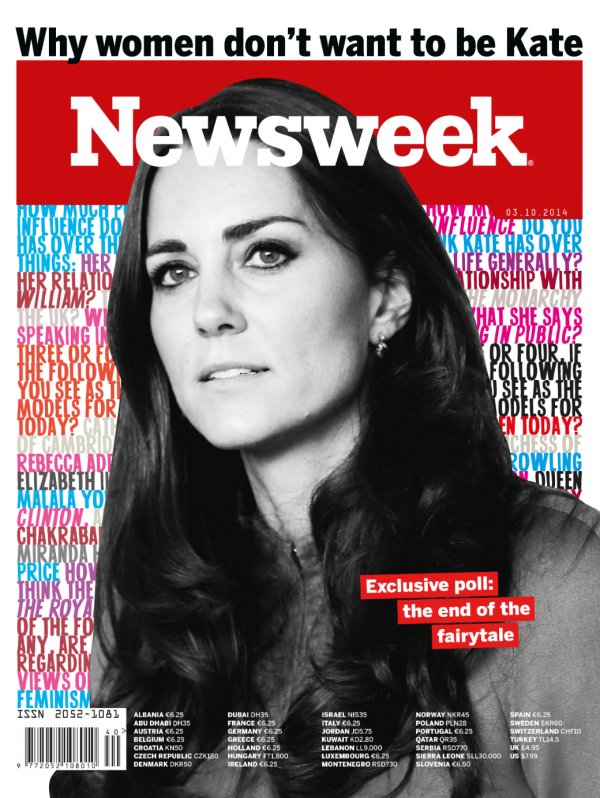 Kate Middleton covers the October 3 issue of Newsweek Europe and the article was released online titled “The Duchess of Cambridge: How Britain Stopped Believing in the Royal Fairytale”.  There is an accompanying poll commissioned by Newsweek Europe and published by YouGov which details how a randomized sample of 3,000 British adults feel about Kate.  The article uses the poll’s data to suggest that the fairytale attitude towards royal women has dissipated since Diana, which may be good for Kate and the monarchy in the long run.  The article also suggests that Kate is hugely influential to the future of the royal family and to William and will basically be the “power behind the throne” and almost a “co-regent in all but name” because she’s the most intelligent royal and holds a lot of power over William and George.

I do not agree with the article’s summations as I think Kate’s intensions and priorities have been misread.  Before I get to that, I’m going to mention some poll results because not only are they interesting they are important to understand the article.  Then I’ll discuss the article.  Prepare for a long post.

Only 1% of women said they wished they could be Kate (though 32% said they would like to be friends with her).  Oddly enough, the poll was conducted the same day Kate announced her second pregnancy, and still very few people cared about it.  Only 2% of people thought Kate’s new baby was the most important news story, while only 7% thought Kate’s new baby was the most interesting news story.

As far as Kate being a role model goes, 43% of people thought Kate represents a step forward for woman and reflects modern women, though only 3% of people thought of her as a feminist and 25% consider her “traditional”.  Yet in terms of being a role model to young women, on a list that includes JK Rowling, Malala Yousafzai, and Hilary Clinton, Kate ranked second with 38% of the vote.

So 1) Kate’s popularity in terms of how many people care about her and her life seems to be waning, and 2) hardly anyone wants to be Kate, yet they still think she’s a great role model for young women?  That doesn’t make sense.

The Newsweek article takes this data and implies that due to the rise of social media and the interconnectivity of the world, the public-royal relationship has changed.  Out with the hysteria and adulation that came with the fantasy that was Princess Diana, and in with reality that the public’s relationship with the monarchy is a socio-political contract and Duchess Kate is a commoner who married a royal.

I agree with Newsweek’s take here.  There has definitely been a huge shift in how the public views the royals and that shift happened because of Diana.  Diana was sainted by many people, but the divorce (and her death) caused the public to view the monarchy in a different way.  And while the Palace and Kate probably thought she would receive the same or similar adoration that Diana received, the public climate changed.  The curtain was pulled back, and thanks to social media, the curtain has been pulled back even farther.  The fantasy is gone and all we’re left with is the reality that Kate isn’t all she’s cracked up to be.

Back to the article.  Newsweek talked to Germaine Greer, Marina Warner CBE, and Caroline Watson to pay lip service to their thesis that Kate will be the “centripetal force around which the monarchy revolves”.  All three imply that Kate is “muted, contained, and controlled” and is not a vehicle for feminism, and yet Newsweek tries so hard to say that Kate is such a deep person under the surface and could make a meaningful role model if she were only allowed to speak.

Newsweek admits that until now Kate has been the antithesis of feminism by “wait[ing] for a prince, becom[ing] a princess and then ced[ing] all authority to the man while assuming the subservient role of mother and wife.”  BUT, claims Newsweek, “this doesn’t have to be the end of Kate’s story, rather it can be the beginning.”

Newsweek makes reference to Shakespeare when describing how Kate’s role could be played—basically as the driving force behind the action and narrative because Kate is the “centripetal force around which the monarchy revolves”.

Then Newsweek makes reference to William and Mary—that’s William III and Mary II, the co-regents who reigned from 1689-1694, when Mary died (William reigned alone until his death in 1702).  Why, you ask?  Because William and Kate are seen as basically a single entity by the public with her power being quite strong.

“Theirs may well prove a co-regency in all but name. William for show; Kate for substance. And, again, this shared responsibility could and should afford Kate further opportunity to lead, to shine and to speak, if for no other reason than Britain needs strong women who inhabit themselves fully and are not corralled into narratives that they themselves did not chose.”

Newsweek REALLY wants Kate to take a strong, leadership role in the changing monarchy.  The problem I have is that I’m not sure that’s what Kate wants.  Trust me, I am all for Kate stepping up her duties and showing her personality through her charities and she definitely needs to make more speeches, but Newsweek seems to think that Kate wants to basically be a monarch herself.  And while I’m sure Carole would LOVE that, I don’t think that’s what Kate wants.  From everything I’ve seen, Kate wants to be a stay-at-home wife and mother and not do any duties she doesn’t have to do.

Newsweek said, “corralled into narratives that they themselves did not chose.”  But the problem is Kate DID chose that narrative.  She changed schools so she could specifically meet William, she waited around being his beck-and-call girl for years without ever holding a full time job, and she put up with a ton of abuse in order to secure her place as his wife.  And once she did get the ring she took the easiest route she could and barely did any work.  She took most of her first pregnancy off, and then took a year of maternity leave only to become pregnant again and take even more time off.  She chose her own narrative, and that narrative was, “wait for the prince, marry the prince, have the prince’s baby, all the while being subservient to the prince.”

I appreciate what Newsweek was going for in wishing Kate would step up her role and become a hardworking role model, but that’s just not what Kate wants.  Or at least that’s not what Kate has shown herself to want.  I don’t know Kate personally, so I have no idea what Kate really wants, but she’s shown up until now that she wants to be the wife of a prince and mother to the prince’s children… and that’s it.  I would love for Kate to want to be a hardworking individual with her own thoughts and opinions, and if that’s what she wants out of life, then she better get on it.  As this poll has shown, the public’s interest in her is waning and if she wants to make a difference then she needs to start right now before all the interest in her is gone.

56 thoughts on “Kate Middleton covers Newsweek: poll results reveal ‘end of the fairytale’, but does Kate want an influential role?”