Kate visits school for M-PACT Plus

Our dear Kate Middleton made an appearance yesterday in Islington, north London, to the Blessed Sacrament School to check in on a project she and the Royal Foundation of the Duke and Duchess of Cambridge and Prince Harry (could that name be any longer?) launched last year, M-PACT Plus.  M-PACT Plus, which stands for Moving Parents and Children Together, is a program that provides early support for children aged 8-17 affected by parents who have drug or alcohol addictions.  It’s a joint project by two of Kate’s patronages, Place2Be and Action on Addiction.  So don’t confuse it with the air circuit breakers.  Kate was joined by comedian John Bishop, who was there representing Comic Relief, who helped fund the project with the Royal Foundation.  Bishop gave a speech; Kate did not. 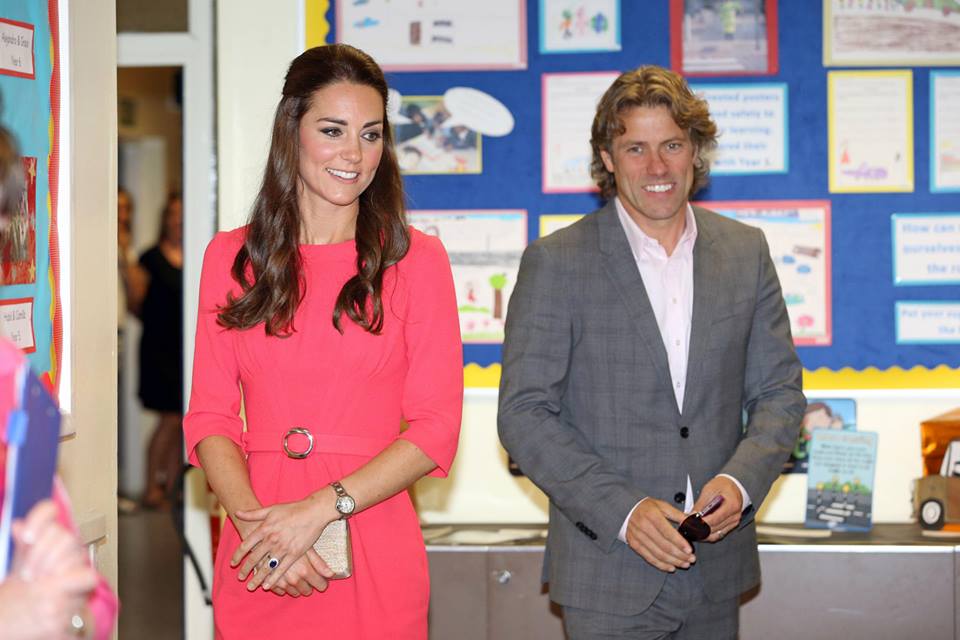 Kate visited the school for an hour and a half, and chatted to schoolchildren (where she actually bent all the way down to talk to them; +1 for her because she usually only bends at the waist to talk to kids) and met project coordinators and teachers to discuss how the project is developing. 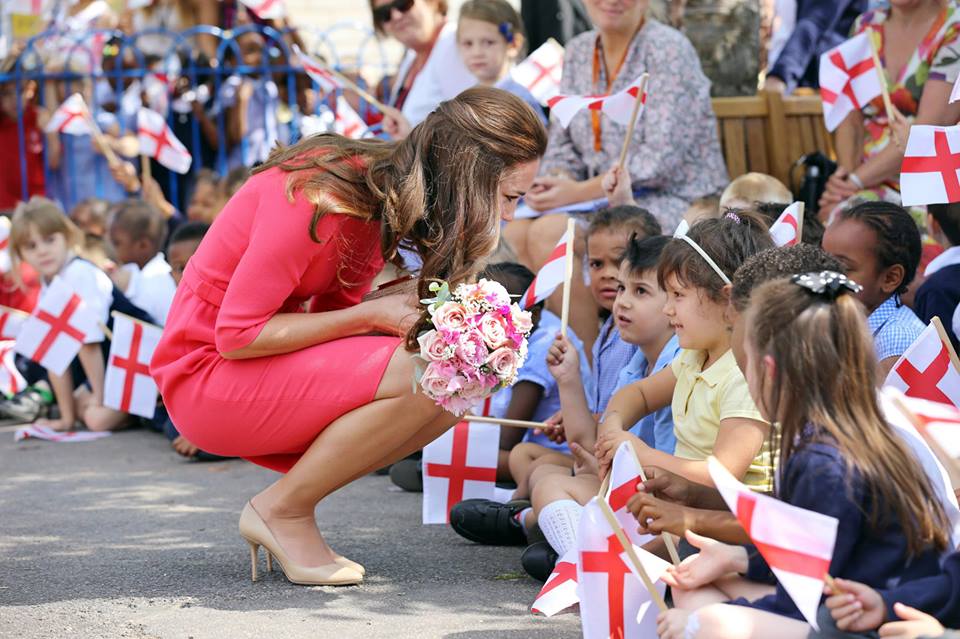 During the meeting with the project coordinators and teachers, Kate “listened intently” and asked questions.  She asked, “Were the parents quite surprised by the things their children were saying?” and “Have you found it difficult to attract parents given the stigma that can be associated with these issues?”

I must say, Kate’s questions during this visit are much improved over previous questions she’s asked people.  A KP spokesman said, “MPACT-Plus came about as a result of The Duchess of Cambridge’s desire to help children of addicted families break the cycle of addiction, and she has taken a close interest in its progress.”  I wonder if this is true, that Kate really is interested in this project and that’s why her questions were better, or if she actually listened to her advisors when they told her about the visit.  Either way, it’s an improvement.  Another +1 for Kate. 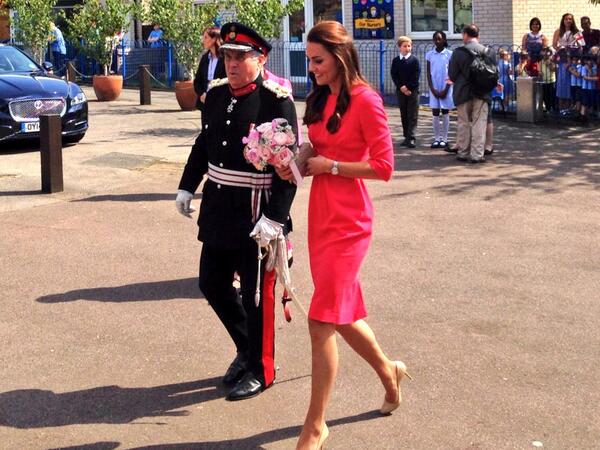 Kate also mentioned Prince George.  She said he is “racing around” and that “He’s so fast and I can’t believe he is opening doors already.”  So George is definitely walking and running around and is probably a huge handful.  Nanny Maria must be getting a workout.

I have to call out the reporters on something.  They made a deal about a kid Kate met, who when asked what his favorite part of school was replied “lunchtime”.  Kate smiled at the answer and the reporters kept mentioning it like it was something hugely funny.  Uh, clearly those reporters don’t remember what it was like to be a kid, because every kid ever has said lunch was their favorite part of school (at least at some point in their lives).  I don’t know why either Kate or the reporters were surprised or amused at this response.  You know what my response is, *straight-faced* “Yep, that’s about right.” 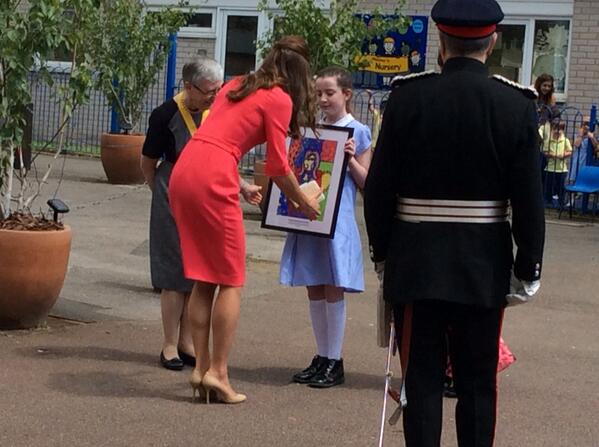 Kate received a portrait of herself and Prince George made by a student in the style of Picasso.  You can kind of see the painting in the picture above, but here is a better photo.  Look, I don’t want to be mean to the kid, but the painting is terrible.  I’m not a fan of Picasso at all, and think his works look terrible, too.  His style is just not my taste at all.  Anyway, I bring this up because Rebecca English of the Daily Mail said on Twitter that, “The portrait of the Duchess and Prince George looks far better than the official one of her hanging in the NPG!”  I really don’t understand why everyone seems to hate that National Portrait Gallery portrait by Paul Emsley.  I think it’s a fantastic portrait and very true-to-life.  Every portrait that people have claimed is “better” than the Emsley portrait has been hideous and looked nothing like her.  Emsley is a fantastic portrait painter; just because he painted Kate true-to-life and didn’t Photoshop his painting doesn’t mean his work is terrible. 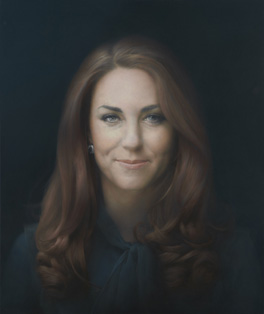 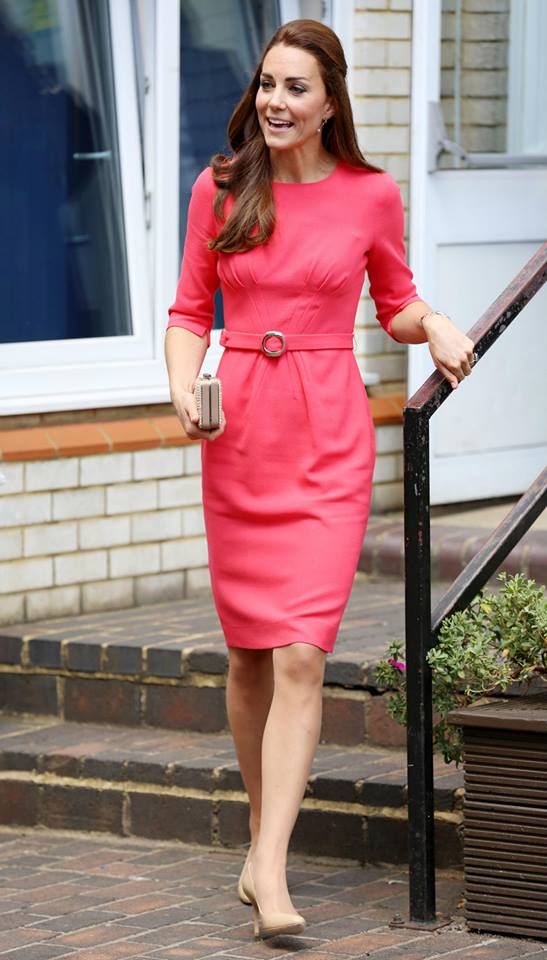 Kate wore a Goat dress, the “Scarlett pleat front dress” in the official “geranium” color, although you could call the color coral or salmon and you’d still be correct—it’s all the same color.  The dress has pleating on the breasts that gather at the waist and flare out.  The terrible pleats kind of make her breasts look saggy.  It’s really unfortunate.  I like the dress except for the breast pleats. It has a straight skirt, her arms are covered, it’s to the knee; it would be great if not for those pleats.  Also, the pleating over the tummy gives her a pooch when she bends, sits, or moves at all.  Cue the pregnancy rumors because omg her dress sagged.  What was Goat thinking with that pleating?

We have not seen this dress previously, but that doesn’t mean it isn’t a repeat.  It’s possible that this was the dress under her Jonathan Saunders coat during her trip to Scotland in May—we were told it was a Goat dress and we could see the coral color peeking out from under the coat.  I really like that Kate has chosen straight skirts for every appearance since the last bum photo.  I don’t know if it will stick, but I really hope so.  Is it too early to hope she finally learned her lesson about those loose, flared skirts?  I’ll give her a tentative +1 for the straight skirts.

For accessories Kate wore her Cartier watch for the umpteenth time—she really loves that thing.  She also brought back her Links of London Bubble earrings that she hasn’t worn publically since June 2012 when she wore them for Trooping the Color.  She carried her LK Bennett straw clutch and wore her Jimmy Choo nude heels she recently debuted.

Here is a video about the visit from Comic Relief with footage of Kate inside the school:

There are two other Kate engagements to talk about, however these were not public, but they were “official” and are on the Court Circular.  On June 23, Kate and Will attended a reception at Kensington Palace to mark the work of the Royal Foundation.  And On June 30, Kate and Will attended the Place2Be conference at the Royal Society of Medicine in London.  You can see photos of her leaving the conference here.  She wore another Tory Burch dress (she previously wore Tory Burch to George’s playdate in NZ).  I don’t like the dress at all.

36 thoughts on “Kate visits school for M-PACT Plus”