The winner for Least Favorite Outfit is… not surprising at all: the Erdem green coat with 19.19% of the vote.  Yep, not surprising; the coat is boxy and the zipper feels out of place and/or unfinished.  No one seemed to like this coat—not even William; he said it was “too bright”.

Rounding out the Top Five:

5th:  Alexander McQueen light blue coat with 7.07% of the vote

Any surprises here?  I knew the green Catherine Walker coat would take a hit.  It was the only other outfit to receive 0 votes in the “Favorites” poll.  So I’m not surprised to see it in the top five here.  The red Catherine Walker coat also isn’t surprising—it’s that flight attendant thing.  I’m a bit surprised to see the Lela Rose white dress (the doily one), not because I don’t think it should be here (I do), but because this dress was also in the top five for Favorite Outfit.  Interesting. 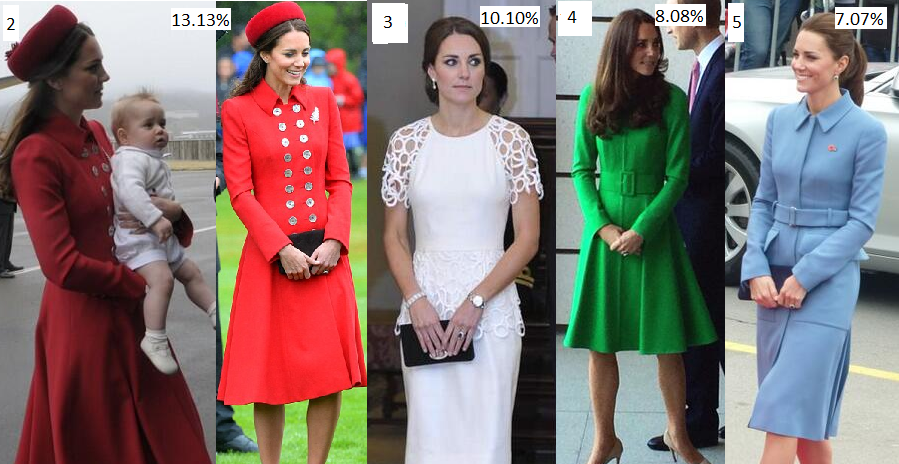 7th:  Alexander McQueen pink shirt and skirt with 5.05% of the vote

Interestingly enough, the Zimmermann white dress came in 6th on both polls.  Both the Stella McCartney blue dress and the Temperley black coat ranked low on both polls.  The best I can figure is that while no one really liked those outfits, no one really disliked them either.  Ranking about the same on both polls (that I haven’t already mentioned) include the pink Alexander McQueen separates, the coffee Roksanda Ilincic dress, and the no id yellow dress.

[click on the photo to enlarge it to read the type] 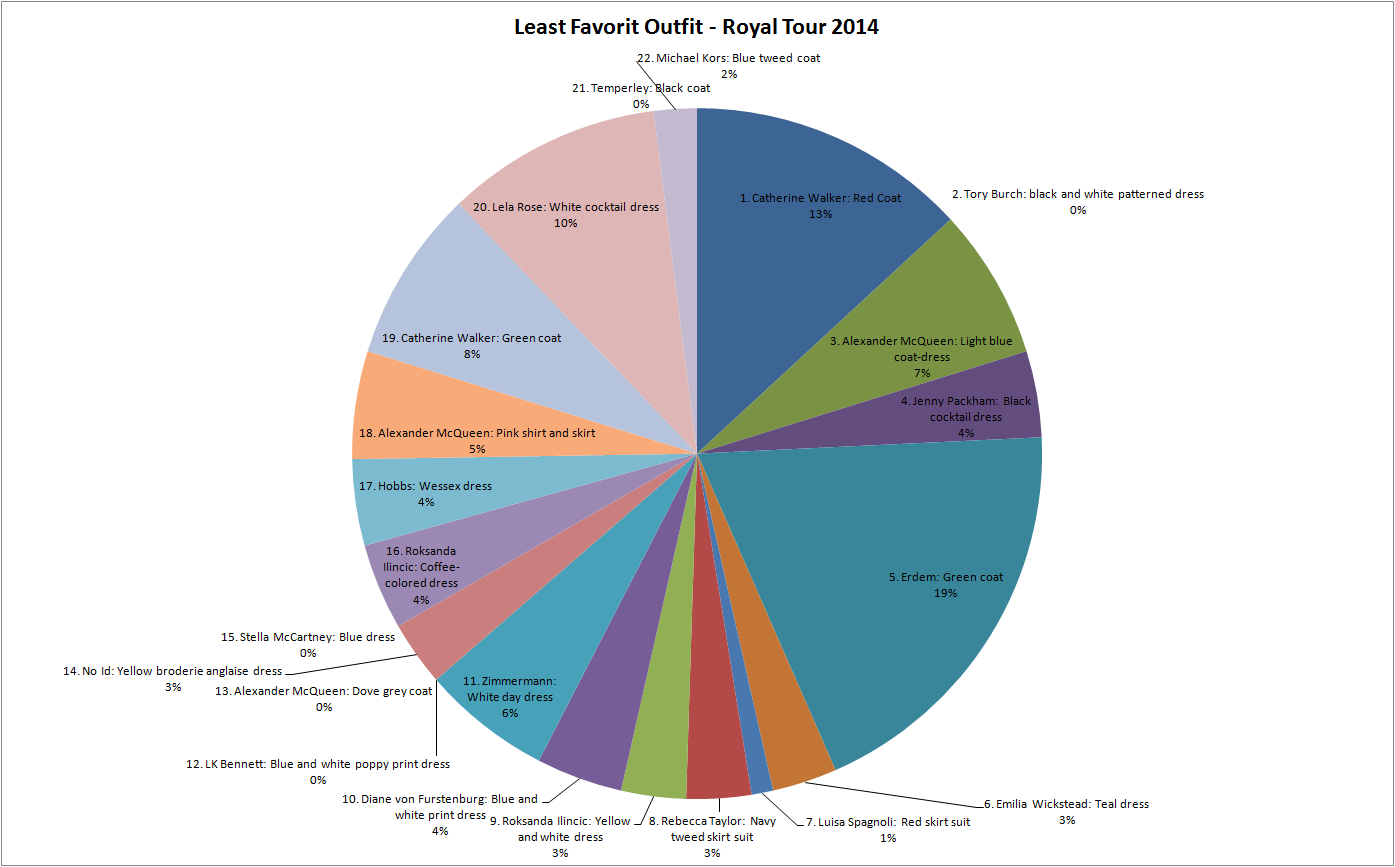 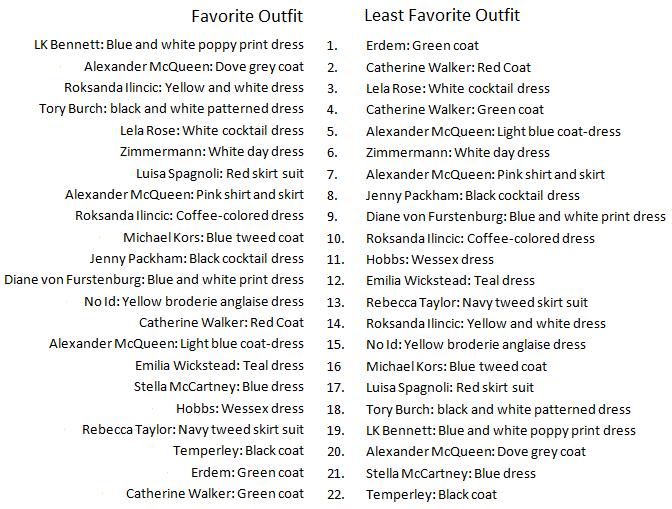 No surprises with the winner for Least Favorite Hat.  The Jonathan Howard Demented Bunny hat won with 50.62% of the vote.  I’m a bit surprised by how many people didn’t like the Gina Foster red hat, which received 34.57% of the vote for second place.  But then again I probably shouldn’t be since so many people compared Kate to a flight attendant when she wore that one.  The Jane Taylor teal hat and grey hat came in third and fourth with 9.88% and 4.94%, respectively.  I’m not surprised with the order in which the hats landed.  If I had to rank the hats by my favorite, it would be the grey, teal, red, dark blue. 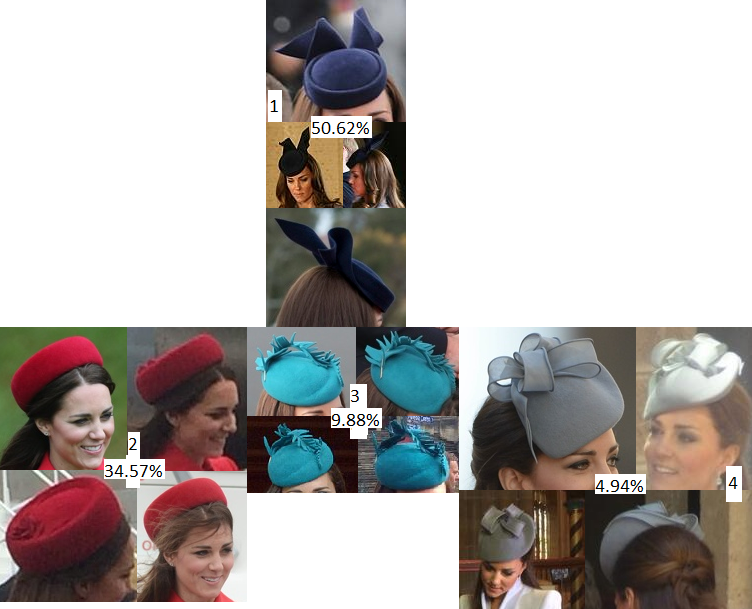 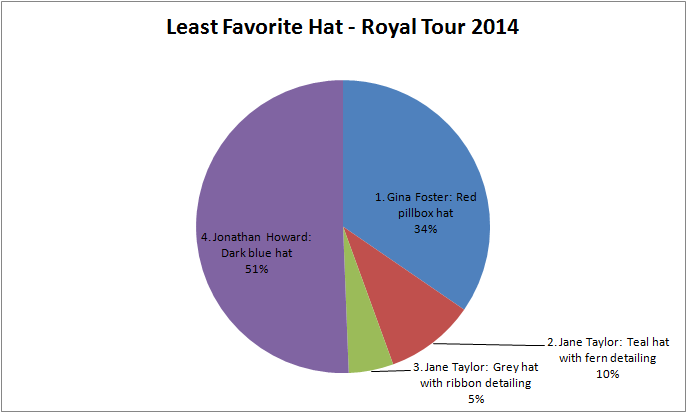 At least Kate is doing an appearance in the month of May, but it’s just too bad she had to wait until the end of the month.  Aside from the Tour, this will be Kate’s fifth (5th) appearance this year.  From the beginning of January until the end of May she will have made five (5) whole appearances.  Damn.

It has been confirmed that William and Kate will be in Normandy for D-Day commemorations on Friday, June 6.  They will attend a veterans’ tea party and the Commemoration of the 70th anniversary of the Normandy Landings at Gold Beach.

We might have another bum-gate on our hands if this Express article is true.  It is reporting that some pap got and is trying to sell a photo of Kate’s bare bum while she was getting off the helicopter in the Blue Mountains, because the helicopter blew up her skirt to expose her bum to anyone around.  There were pics of Kate holding her skirt down at the time.  The Express is saying it’s a new “invasion of privacy” issue, but that’s BS.  She was in public, on public property, while on a public engagement; there is no expectation of privacy there.  Who knows if this is true, I guess we’ll have to wait and see.  But it really is getting annoying having to talk about this over and over and over again.  If she just weighted her damn hems we’d never have to talk about her bare ass again.  Sigh.  You know, I really hope this isn’t true.  Here’s a question, though, why does she not wear underwear while on official engagements?  Or was she wearing a thong which exposed her butt cheeks?  I never want answers to these questions; just wear underwear and weight your hems, please, Kate!

It’s being reported in the Times that William is going to take a new job instead of go full-time into royal duties—because William is a baby and is throwing tantrums by refusing to do his royal duty and go full-time.  Reportedly, Will plans to take a job as an air ambulance pilot with the East Anglian air ambulance service—which is near Amner Hall.

In the interest of full discloser, I haven’t read the entire article.  I don’t have a subscription to the Times so I was only able to read the first five paragraphs.  If anyone does have a subscription to the Times and can read the entire article, please let me know if there is anything of interest in the rest of the article.  From what little I got, it doesn’t look like Will is going to be stepping up his royal duties anytime soon, which means neither is Kate.  So I guess that “busy summer” the royal reporters were talking about is out the window.  Damn.