We have a winner!  I have the Favorite Outfit Poll results.  The LK Bennett blue/white poppy print dress was the winner with 23.08% of the vote.

Rounding out the top 5 were: the Dove grey Alexander McQueen coat with 13.02% of the vote; the Roksanda Ilincic yellow/white dress with 7.69% of the vote; and tied for 4th are the Tory Burch black/white patterned dress and the Lela Rose white cocktail dress with lattice sleeves and peplum, both receiving 5.92% of the vote. 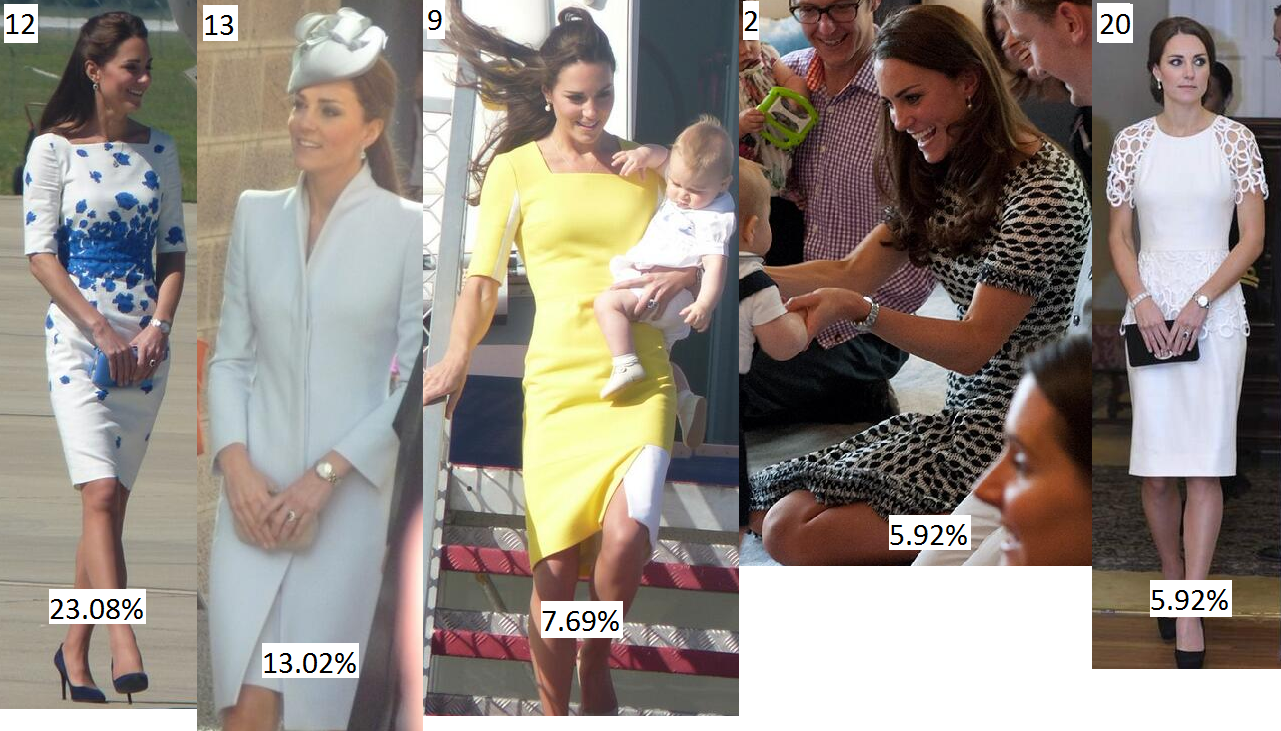 People don’t seem to like Kate in green.  Both green coats she wore, the Erdem and the Catherine Walker, received 0% of the vote.  No one voted for either of those coats.

I’m a bit surprised at the results.  I’m actually shocked to see that doily dress in the top 5, and I’m not a huge fan of the Tory Burch dress either.  And I’m surprised those green dresses didn’t get any votes at all.

It’s interesting what other people picked as their favorites.  Style is so subjective. Here is a pie chart with the percentages of all the outfits: 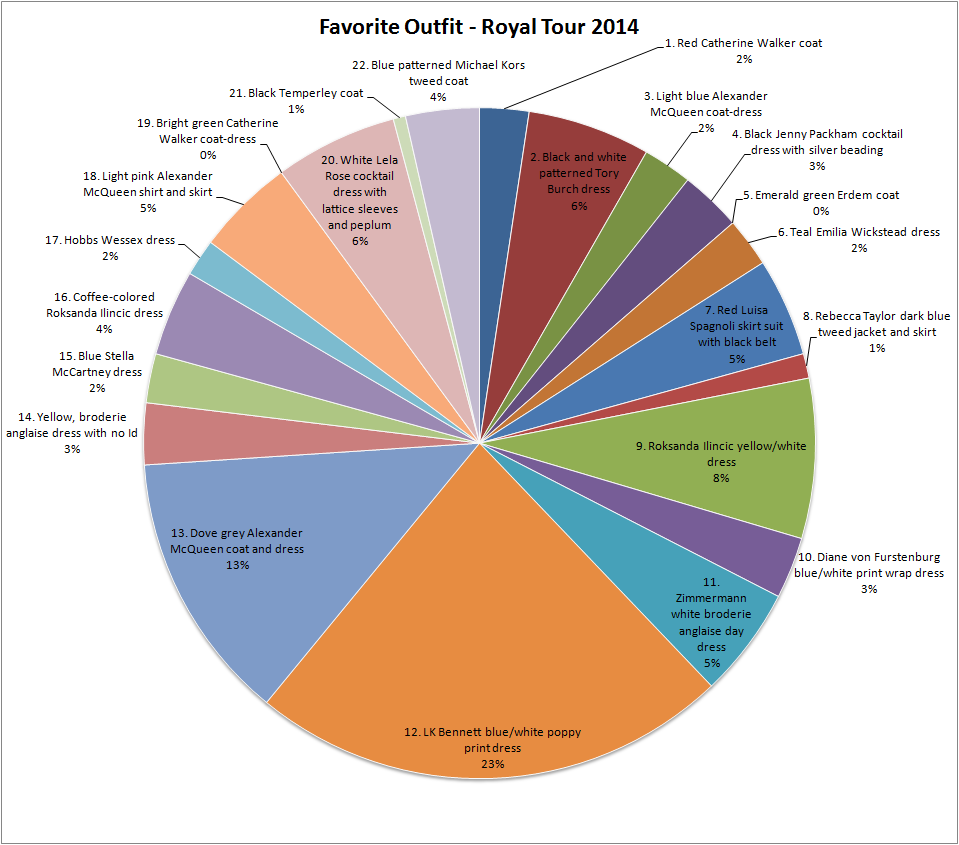 I had a request to do a “Least Favorite Outfit” poll.  I haven’t put it up yet, but now I’m really intrigued what a “least favorite” poll would do.  I’m wondering how similar and different the results would be.  Obviously they would be different.  Just because no one thought the green coats were their favorite doesn’t mean those coats are their least favorite.  Hm… I’m really curious about this now.  What say you, commentators, would you like a Least Favorite Outfit poll?

Here are pictures/percentages of the remaining outfits: 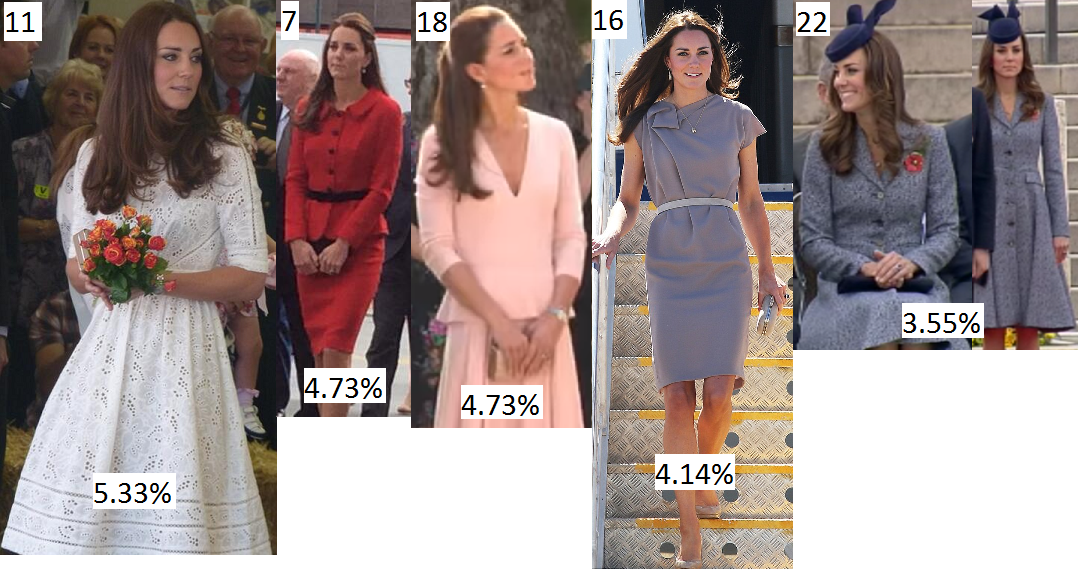 [The three outfits tied for 11th] 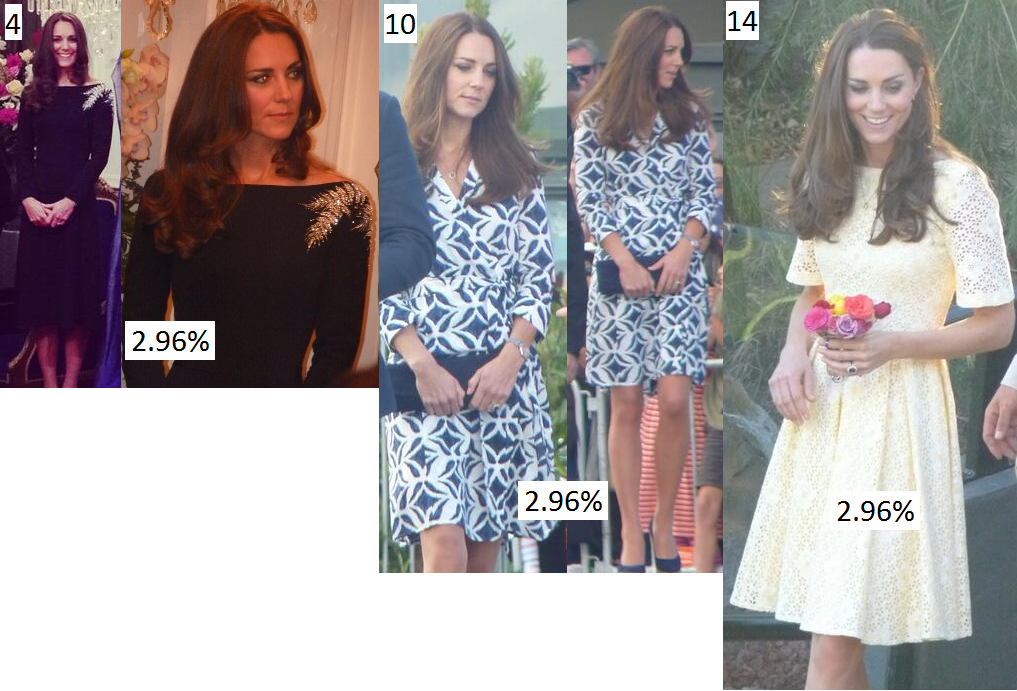 [The four outfits tied for 14th] 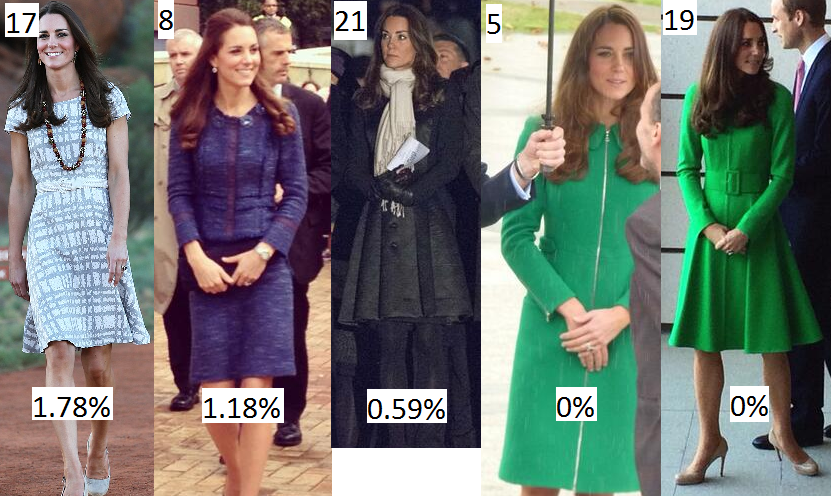 In other news, William has become president of the British Sub-Aqua Club, and hopes George will learn to scuba dive at some point.  Apparently Will really loves scuba diving.  He is also scheduled for 3 events this coming week.  Depending on what happens, I might just wait and combine his events.  I don’t know how much there will be to talk about with him, especially at the Navy museum.  On Tuesday, though, William will be hosting a dinner at Windsor Castle, with people like Benedict Cumberbatch scheduled to attend.  Kate is not attending.  So Kate is missing another event where she would have mingled with celebs (I bet she’s hating that—I’d hate it too if I had to miss out on meeting Benedict Cumberbatch).  According to the DM, Kate was invited but turned down the invitation because she and William “want to keep their charitable projects separate in order to spread their influence as wide as possible.”  What?  So they’re not going to be doing any more (or at least very few) appearances together?  ‘Cause that’s not going to set off the “they’re living separate lives” alarms or anything.  I think that’s dumb.  In fact, I think it’s a missed opportunity for Kate; she could have gotten an easy, celeb-filled appearance to pad her numbers and tide people over until she decides to visit one of her charities again.

Speaking of when Kate will make her next appearance.  In this Express article it says Kate and Will are scheduled to take part in a 70th anniversary appearance with the Queen, Philip, Charles, and Camilla in France on June 6.  I can’t find any other confirmation on that, but for now I’ve added it to my new “Future Events” list.  That event is the only thing Kate even sort of has planned until August 4 when she goes to Belgium.

I went back and checked how long Kate was MIA after her last tour in 2012.  The Asia tour ended on Sept. 19, and her next appearance was on Oct. 8—a 19 day rest period.  The Oz/NZ tour ended on April 25.  It’s now May 11.  It’s been 16 days since she was last seen, and there is no sign she will show up any time soon.  After the last tour, Will and Kate did a few joint engagements within one week after that 19 day break.  Will seems to be following that pattern this time, but Kate is not.  I have no idea when Kate will make her next appearance, but I sure hope she doesn’t wait all the way until June.  If they use the “maternity leave/taking care of George” line, I’m calling BS, because we know they have a full time nanny.  There is no reason Kate couldn’t take a few hours and make an appearance. I didn’t think Kate would make an appearance before now, and I was expecting a vacation (so if she took one, no big deal), but I was hoping she would have at least scheduled something by now. Something definitive and preferably in the month of May. Come on, Kate, you’re public wants you.