Kate and William visited Dunedin and Queenstown for the 7th day of their tour.  While it took place on Saturday for me, it was Sunday to them (NZ is 16 hours ahead of where I am), so they started the day by going to church.  Apparently it is normal for royals to attend church while on tour, but it still seems odd to me to see the Cambridges going to church not on Christmas or for some other special occasion, because they are not regular church goers.  After church they did a mini-walkabout where Kate rebuffed someone’s compliment.  It’s always annoying to me when people do this, because usually they’re fishing for more compliments.  Not saying that’s what Kate did here, but people in general do this all the time and it’s annoying.  Next the Cambridges went to Forsyth Barr Stadium in Dunedin and “coached” two teams of children aged five to seven in Rippa rugby (a non-contact form of rugby where the players wear flags on a belt and the other players have to rip it off, instead of tackling them).  William’s team won, 30-20.  After the game, William and Kate handed out medals to the winning team.  After the rugby, the Cambs flew to Queenstown where they attended a wine tasting/tour of the vineyard and then went on a Shotover jet ride—which is some sort of high speed boat ride on a river; check out their website for further details. 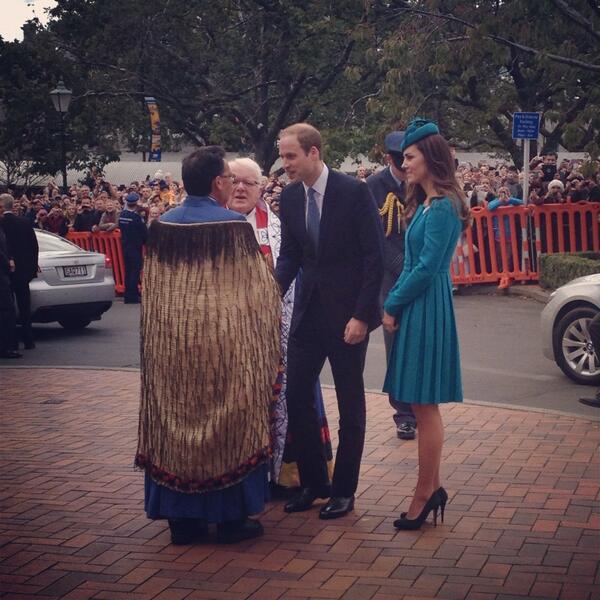 FYI, on the RNZAF flight from Wellington to Dunedin, the royals flew with the entire press pack.  The royals of course stayed in front with a curtain blocking them from the press, but still, it happened, which is kind of funny/cool.  When the Cambs landed in Dunedin, they were met with bagpipes (there is a large Scottish population in Dunedin) and a Powhiri (a traditional Maori welcome) from the Ngai Tahu tribe—which is the main Maori tribe on the South Island.  The Powhiri included chanting and a hongi (where they touch noses) with the members in attendance.  Prince George got more gifts; this time it was some books from a five year old (who got a hug from Kate), and an albatross feather from a seven year old.

To church, Kate wore a teal Emilia Wickstead dress with pleating and a square neckline.  Kate kind of went with a New Zealand designer this time—Wickstead is a New Zealander—but I’m not sure it really counts because Wickstead is based in London and Kate has worn her before, and so it’s not like Kate chose some local designer to wear for the first time.  Kate wore a Jane Taylor custom hat in the same teal color.  She also wore her Emmy pumps and clutch in the what-we-thought-was-green-but-turned-out-to-be-carbon color she wore on St. Patrick’s Day.  She brought out the Queen’s diamond silver fern brooch again.  Kate’s hair was covering it in a lot of the shots, but it was there.  I really like that brooch.  As for earrings, Kate wore her round Kiki McDonough green amethyst earrings.  I have to say, I love this color, but I’m not sure I’m in love with the dress.  I think this dress is better than the coats she’s worn the last week, but to me the square design and pleating make her look boxy and bigger in the middle than she is.  Seriously, front pleating doesn’t look good on anyone.  But other than that, the silhouette and color are great.  If I had to pick best outfit so far, this one wins.

For rugby, Kate changed into navy skinny jeans (jeggings?) and a white Jonathan Saunders sweater and sneakers.  For the wine tasting, the Wedges of Doom were back, as was the Zara jacket (with all those buttons) from Day 6.  She paired them with a blue and white checked button-down shirt.  For the boat ride she changed back into the sneakers and threw on a waterproof jacket. 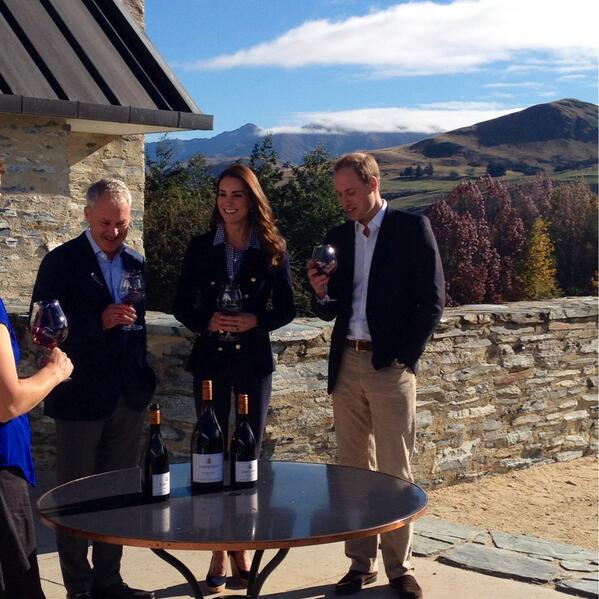 Something that happened Day 6 I believe, but didn’t come out until Day 7, is that the Cambs were given a blanket made by a NZ woman (it was commissioned by the NZ government as the official gift) and upon accepting the gift, William is reported as saying, “You might have to make another one soon.”  This sent people into a tizzy thinking that William was hinting that Kate is already pregnant with baby #2.  But I guess now the woman is denying he said “soon” and really said “sometime”.  But then everyone was waiting to see if Kate drank any of the wine—she reportedly did—and of course the Shotover Jet is not allowed for pregnant women, so… crisis averted?  Stand down all you #GreatKateWait-ers out there, false alarm.

Here is an interesting article.  You know how people keep saying Kate is Single White Female-ing Diana with her outfits?  Well, what if Kate’s SWF-ing the Queen now?

I have to say, I’m kind of let down by this tour.  I know the schedule came out months ago, but I guess I didn’t look at it too closely because I thought they would be doing more than they are.  I mean, wine tasting and white water rafting?  How is that “official royal appearance” worthy?  That’s what people on vacation do.  It’s almost like Will and Kate are championing the NZ tourism board or something.  Kind of like how The Bachelor/Bachelorette are sponsored by the tourism boards from the cities they visit while filming.  “Will and Kate’s Royal Tour 2014, sponsored by the New Zealand Tourism Board. Only on ABC.”  And they’ve only spent a few hours each day with their “grueling” tour appearances.  I guess I just expected more.  My own fault, I suppose.