On Monday day NZ time—Sunday evening US ET—The Cambridges visited Christchurch.  When William and Kate arrived, they got a hongi (traditional welcome where they touch noses) from members of the Ngai Tahu at the Christchurch City Council Building where the chief told them to “Do what Princes and Princesses have always done and increase your family” (ugh).  Next, Will and Kate visited the CTV Building Memorial Park where they met the families of the 185 victims of the 6.1-magnitude earthquake that devastated Christchurch in 2011.  They also visited the Transitional Cathedral, which is made out of cardboard—the cathedral was destroyed in the earthquake.  The Cambs then went for a walkabout in Latimer Square before playing cricket.  The cricket was to promote the 2015 Cricket World Cup which will be held in New Zealand.  Kate played cricket in her heels.  Kate made some hilarious faces when William sent the ball flying past her head.  Then she wagged her finger at him, which was equally as funny—and completely necessary; Will must have thought he was playing baseball given the way he hurled that thing at her head.  Will also made some crazy faces when hitting the ball when it was his turn at bat (is that the correct language for cricket?).  Will and Kate met five sets of twins—I’m not sure why other than that they were there.  Kate and William then opened the new Visitor’s Center in the Botanic Gardens before attending a Future Focus event at the Wigram Air Force Museum.  William gave a speech; then he and Kate unveiled a plaque at the Royal New Zealand Air Force memorial.

Kate wore a red Luisa Spagnoli skirt suit with a black belt that has a bow at the front (£495/~$830).  The outfit is a repeat; she previously wore this to an appearance at St. Andrew’s in February 2011.  For that appearance she paired the skirt suit with a black turtleneck, black boots, and black pantyhose.  For this appearance in Christchurch, Kate wore the suit with black pumps and clutch.  She also wore her Cartier watch and Annoushka pearl drop earrings.  Supposedly this outfit was in tribute to the area, as their local colors are red and black.  I like this silhouette.  This pencil skirt situation is what a lot of people have been saying she needs to do more of to prevent more “Marilyn Moments”.  I think she looks rather sophisticated in this outfit.  The styling is way better than the previous time she wore this suit.  Before she looked kind of tacky, but this time it looks much sleeker.

Kate’s hair was pulled back in a half-ponytail situation.  I’m a fan of the half-ponytail look for Kate; I think it’s a middle ground between what I want and what she wants.  I want her hair pulled off her face and out of the way for when she’s speaking, and bending and talking to people.  She wants her security blank around her at all times.  The half-ponytail gets the front bits out of her face, but leaves the back down so she feels comfortable. However, due to wind and playing cricket her hair got blown around and messy, which is a shame. 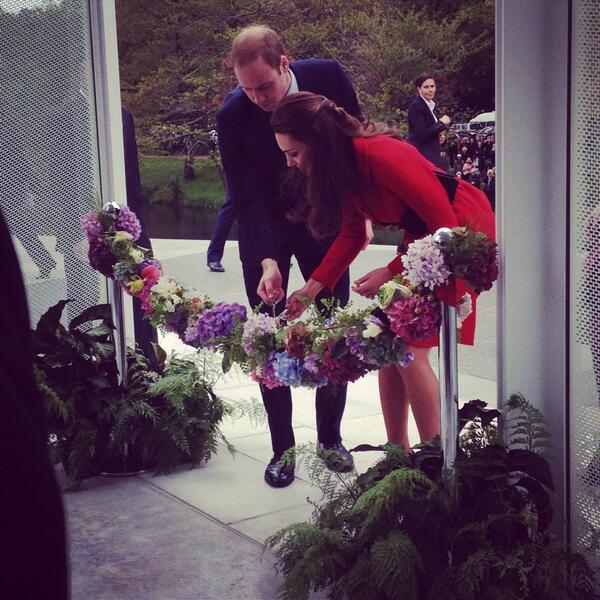 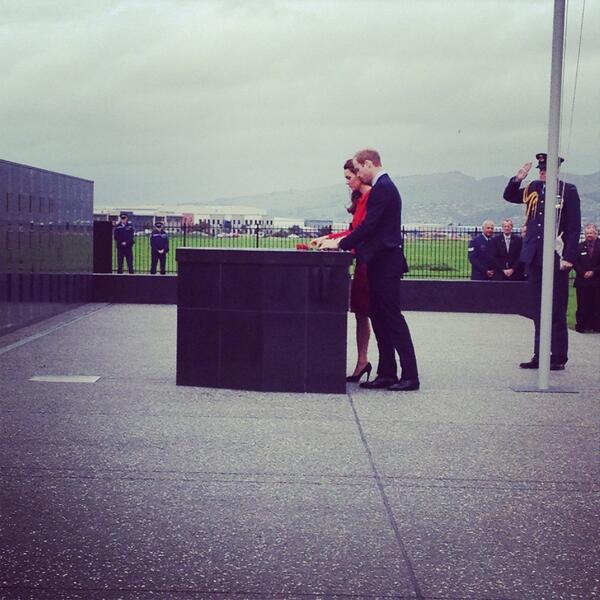 Tuesday (NZ time) was another private day for William and Kate—how many do they have on this tour?  However, the Cambs are dining with the NZ Prime Minister, John Key, and his family for their final dinner in NZ.  They travel on Wednesday (NZ time) to Australia.  They have a few things planned—like public drives and such—before they leave Wellington in the afternoon.  I’m not sure how many photos we will get of that because the press pack has already moved to Sydney.  We will hopefully get some new photos of Prince George when the Cambs arrive in Sydney—I need more photos of the grumpy face.  The Cambs will attend a reception at the Opera House once they arrive in Sydney.

I am curious to see the size of the crowds in Oz. The crowds in NZ have been fairly large. I’m only bringing this up so I have an excuse to make a new paragraph and point to this picture: wizard!

Before I wrap up, I would like to point out this Mirror article by FleetStreetFox titled, “The Royals are a virus capable of causing a deep and persistent irritation.”  It’s hilarious and amazing and well worth a read.