On the 6th (?) day of their New Zealand tour, Prince William and Kate Middleton visited Hamilton and Cambridge.  They flew into Hamilton and did separate visits: William went to an aerospace factory for a tour; Kate visited a children’s hospice called Rainbow Place, it was a tea party with an Alice in Wonderland/Mad Hatter theme.  Next they visited Cambridge—named after the second Duke of Cambridge, George William Frederick Charles, Queen Victoria’s first cousin (someone mentioned that there are three future king’s names in there, and that just shows you how unoriginal the British royals are with their naming).  There was a rather large crowd at Cambridge, estimated between 10,000-15,000—the town’s population is 18,000.  William and Kate had lunch in the town hall and chatted with the crowd; then they laid two roses on a war memorial.  Next, they opened the Avantidrome.  They were gifted with a child’s bike and helmet for George (kid is cleaning up with the gifts).

During her visit to Rainbow Place Children’s Hospice, Kate met with a number of patients–and then attended the tea party. The kids had nothing but nice things to say about her. Look, as much as we harp on Kate about all sorts of things (that are totally deserved), I’m not going to deny the fact that Kate does make those children happy and/or feel better. They don’t understand her faults the way we do. If meeting a “princess” makes them happy, then that’s great. And while I do think Kate should focus more on sports charities because that’s when she truly comes alive, it is nice that her focus on children’s hospices gives those kids something. If only she did more of that.

Kate wore an emerald-green Erdem coat.  She accessorized with black pumps and a black clutch.  She wore her Cartier watch and emerald and diamond earrings.  I have to say, I’m happy she didn’t wear a belt.  The coat is a bit looser through the midsection and Kate’s MO is to belt coats like that.  I’m glad she didn’t.  I like this coat.  The color is great on her.  I’m not sure I like the zipper, but whatevs.  I think I like her other two green coats better, though.

A crowd member complemented Kate on the coat and Kate said she liked it but “Prince William thought it was a bit bright.”  Ugh.  First, take a seat, William.  Second, why does Kate respond to things by bringing William into the response?  Why didn’t she just thank the lady instead of telling William’s opinion of it?  I don’t even understand how William’s opinion of the coat is relevant when someone gives Kate a compliment about it.  I think it says something that the first thing to come to Kate’s mind is William’s opinion.  Girl, get him out of your head and be your own person.

Here’s something funny, though.  Every coat Kate has worn during this tour has been compared to a flight stewardess outfit.  Check it out:

Kate with the Qantas ladies and the ladies of Virgin Air 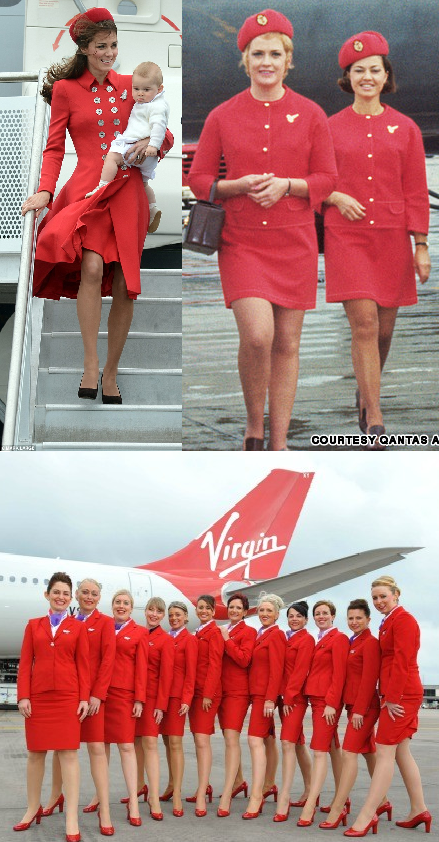 Kate with the girls of Pan Am 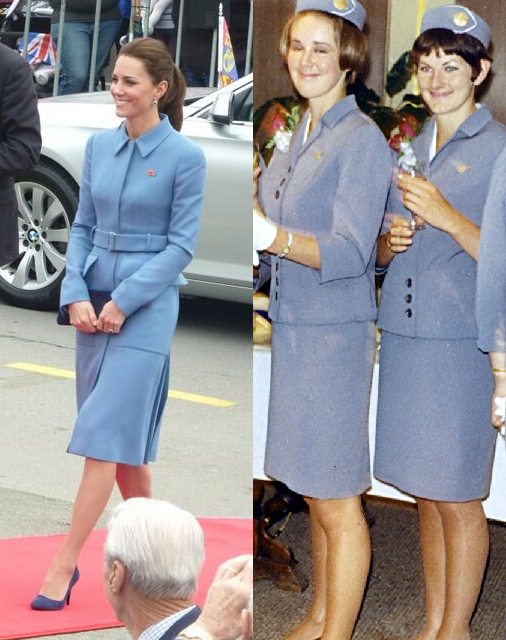 Kate with the girls of Aer Lingus 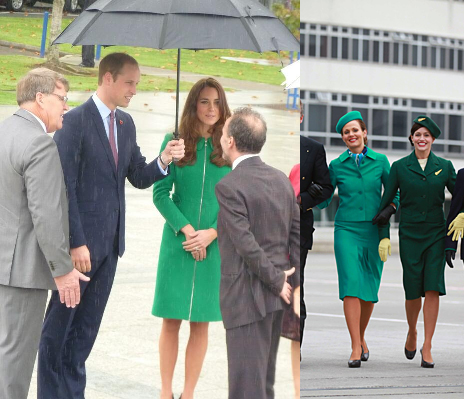 I didn’t come up with any of these comparisons, those credits go to Niraj Tanna, Lola Heart, and Matilda so Blue, respectively. I’m just posting them to get other people’s thoughts.

9 thoughts on “Kate wears green for visit to Cambridge, Hamilton”