Kate beats William 2-0 in sailing during visit to Auckland

Kate and William ventured to Auckland for Day Whatever of their tour.  They touched down at the RNZAF base and greeted some military families.  Then they met some of the crowd waiting outside the harbor.  Then they raced each other around Auckland Harbor on America’s Cup ships.  They did two races, Kate won both of them.  William wasn’t too thrilled.  He claimed to have been sabotaged and when he learned Kate was pleased with her victory he said, “I bet she was.  Selfless husband—I wanted a quiet night.”  I don’t even know what that means, but William does seem like the type to not be happy if his wife outshown him in something.  Kate sailed when she was younger, and did really seem to get into the sailing; maybe she’s just better than him.  I will say this, Kate does seem to come alive when there are sports involved.  I keep saying that she should do more sports-related charity patronages, but for whatever reason she seems to stick to children’s hospices—even though she can’t pronounce palliative correctly. 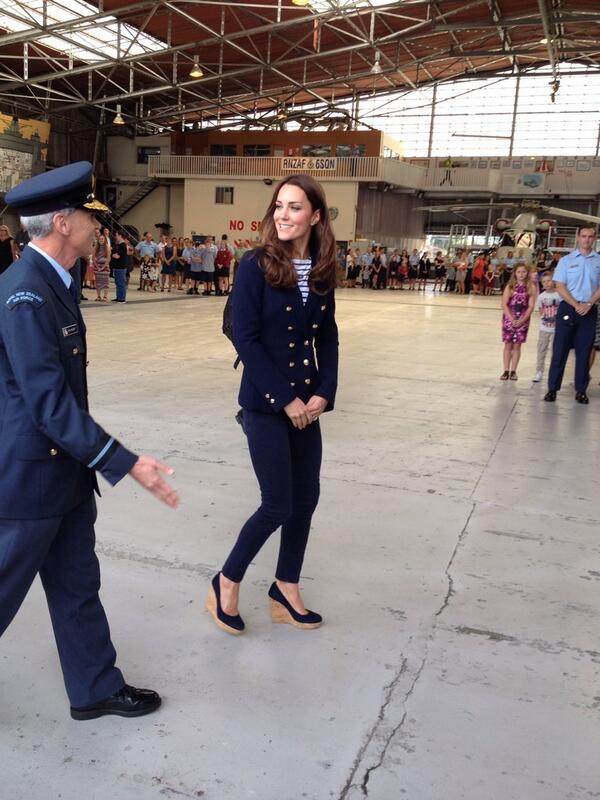 Apparently a lot of mothers are throwing their baby daughters at Prince George.  There was a reported incident of this yesterday, and William joked today about regularly being offered potential partners for George.  Is this sad to anyone else?  I understand that these mothers are probably joking, but they’re also not joking if you know what I mean.  At least some part of them is serious about marrying their daughter off to a prince or else they wouldn’t be suggesting it, even in jest.  I feel like Carole Middleton would have been one of these mothers who “jokingly” offered her daughter up to a prince, and we all know how that turned out.  Makes me sad for those poor little girls.

Kate mentioned to one of the military wives/mothers that when George was younger, William was away a lot.  That would have been when William was still pretending to work for the RAF and Kate was in London or at her parent’s house, right?  Hm… I wonder how much he’s around now. William also mentioned to someone that George first slept through the night when he was five months old, and that before then it was really difficult. Maybe that’s why he was away so much when George was so young, to get away from a crying baby and get some sleep?

An interesting thing that happened, there was a small protest during the Cambridge’s visit.  A plane carrying a sign that said, “Time for a Kiwi head of state”, flew overhead during the visit.  Hilarious.

Another interesting thing, it has been raining pretty much the entire time the Cambridges have been in New Zealand.  In Auckland, it was sunny… until the Cambs showed up.  Is it just me or could this be some sort of sign?  Like the universe doesn’t want Will and Kate to be in NZ or something?  I don’t know, something to think about.

Now for fashion.  Ugh.  The Wedges of Doom are back.  So are Kate’s awful skinny jeans.  I don’t understand why pretty much every “dressed down/sporty” outfit Kate wears is almost the exact same, down to the skinny jeans and wedges.  She changes up the jacket, but even the shirt is the same and/or similar.  Don’t believe me?  Check out these outfits:  One, two, three, four, five six, seven, eight.  Girl, you need to get a new outfit.  Anyway, for this outing, Kate wore a double breasted Zara jacket in navy ($139).  It has a lot of buttons.  Kate also wore a cobalt and white striped shirt from Me and Em (£38/$68) that she’s worn before.  She wore her Stuart Weitzman Corkswoon wedges.  Eh, nothing special, we’ve seen this look a lot before.  Kate’s gotten really slim again.  She’s dropped a lot of weight in the last few months.  She’s wasn’t this thin during her three appearances in February was she?  I don’t remember her being so thin then.  Anyway, her thinness is highlighted by her skinny jeans, which is probably why she wears them.  Kate also wore her round Kiki McDonough earrings and her Cartier watch.  Isn’t that thing 6K?  I wouldn’t wear a 6K watch to go sailing, but sure, go ahead Kate.

PS. George got another gift.