Kate bores in Jenny Packham to unveil portrait of the Queen, William gives a speech

After their trip to Blenheim, Prince William and Kate Middleton went back to Wellington where they attended a reception at Government House.  They unveiled a new portrait of the Queen—which is not particularly striking, in fact it looks kind of terrible to me; the face looks nothing like Her Majesty and the right hand looks like it belongs on the Silence (Doctor Who).  William gave a speech—he spoke a little Maori at the beginning and end.  I have to say, I and many others give Kate a lot of crap when it comes to her speech-giving skills, but William isn’t much better.  He basically reads the speech from the script, and because of that his jokes are pretty stilted and aren’t that funny.  To me, any sincerity goes out the window when one reads from a script the way William and Kate do.  The words are kind of meaningless because anyone could have written those words, and if one isn’t even willing to take the time to learn the speech, then how am I supposed to take that person seriously when they say those words?  Anyway, moving on. 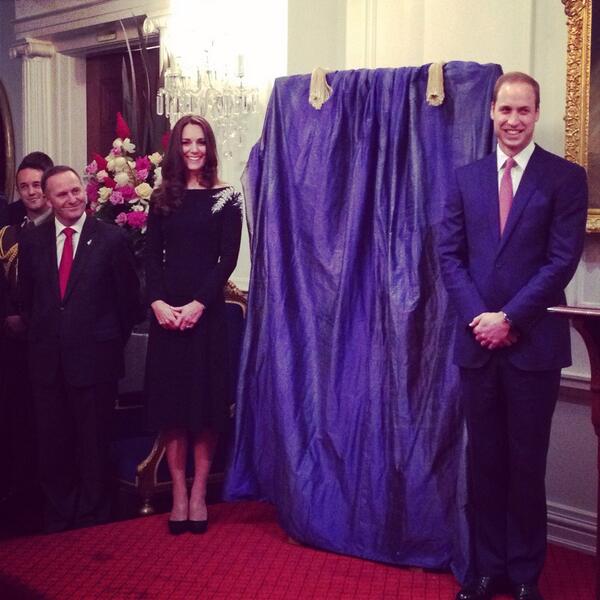 I was going to tag this bit onto my previous post, but I didn’t want to sully the praise I had for Kate’s day outfit.  This reception is one of the fancier/glitzier events the Cambridges have on their schedule (even though it isn’t even full-length gown worthy, let alone tiara worthy), and Kate was supposed to wow us.  But instead she showed up in one of the most boring outfits she’s worn.  I mean, I get that, yay she wore New Zealand’s fern on her dress, but damn is that outfit boring.  She wore a boring black Jenny Packham cocktail-length dress with hand-stitched silver beading on her left shoulder representing the silver fern—New Zealand’s national emblem. Again with a non-New Zealand designer.  She wore her black Jimmy Choo pumps and carried a black clutch.  She wore her hair down in her normal dolly curls.  She did her makeup the same way she always does it.  She wore her diamond cluster earrings and bracelet that are supposedly a wedding gift.  This outfit is just so boring.  The reporters are all saying how “dazzling” and “glitzy” this outfit is… No, no it’s not.  This is super boring.  There is nothing dazzling or glitzy about this outfit.  I really liked her day outfit, though, much more than this one.  I’m just going to forget this reception outfit and focus on the day outfit.

14 thoughts on “Kate bores in Jenny Packham to unveil portrait of the Queen, William gives a speech”