Huzzah! Kate wore her hair up! Kate and William flew to Blenheim on New Zealand’s south island for day 4 of their tour. They attended an event commemorating the centennial of the start of World War I at the Blenheim War Memorial. They laid a wreath on the memorial and met with veterans (from WWII, there are no surviving veterans from WWI). The wreath had a note attached reading: “Never forgetting those who have paid the ultimate sacrifice for our freedom.” It was signed, William and Catherine. Afterwards, the Cambridges did a walkabout and met with a bunch of fans who came out to see the couple.  Predictably, the crowd was more interested in Kate and the people who got William were screaming for Kate.  Also, Kate received a Princess Diana Ty Beenie Baby from a member of the crowd.  They were a limited release thing after Diana’s death in 1997—I have one, or had one at some point; don’t know where it is now. 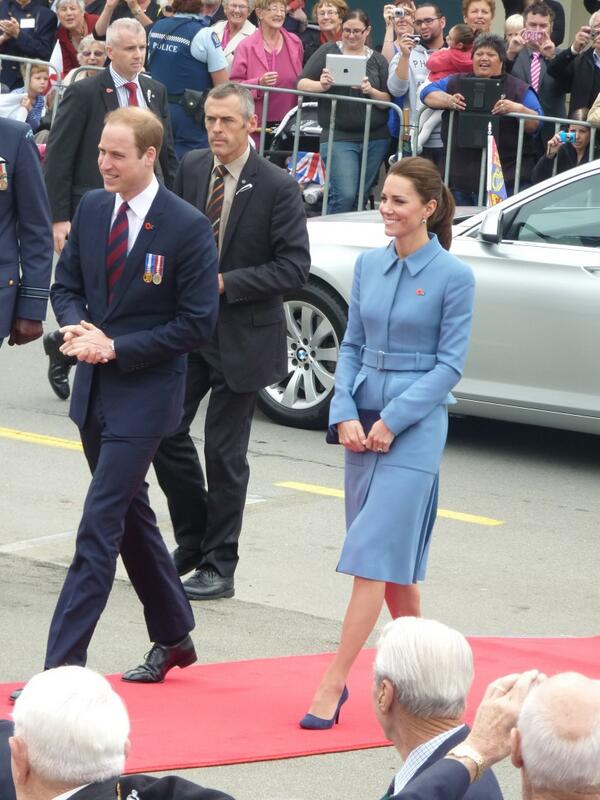 Before I get to their next appearance, I must say I am so envious of Kate during their second visit in Blenheim.  Kate got to meet (and be filmed by!! – Granted it was just on his phone, but still) Peter Jackson.  He’s one of my director crushes.  I love him, and am so totally envious that she got to meet him.  The only thing that would make me more envious would be if they had been at Hobbiton.  For those that don’t know, Peter Jackson directed the Lord of the Rings trilogy and the Hobbit trilogy. 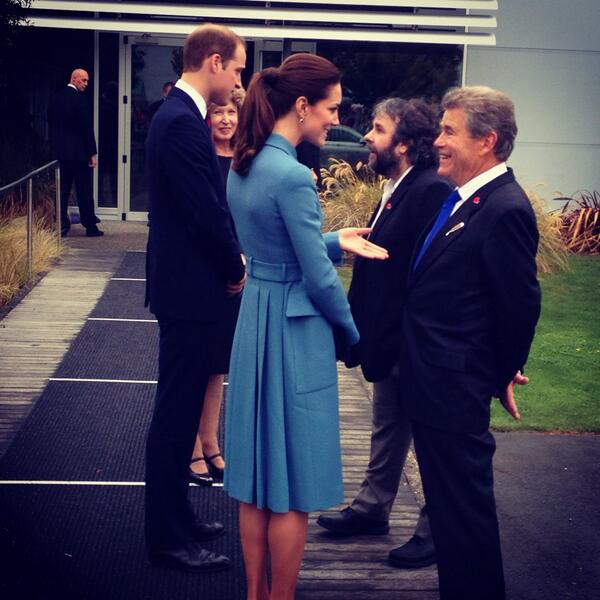 Anyway, after the War Memorial and walkabout, William and Kate went to the Omaka Aviation Heritage Centre where they viewed the “Knights of the Sky” exhibition—a collection of 20 World War I aircraft collected by Jackson and displayed in dioramas depicting scenes from the conflict.  William got to climb inside a Sopwith Pup biplane and check it out.  Kate didn’t get to get in the cockpit—which would have been difficult for her anyway in her skirt/coatdress—but she peered inside and asked what all the levers did.  It’s kind of lame that only William got to get in the plane; that would have been a cool experience.  William was given the chance to get into the German Fokker triplane (most famously flown by the Red Baron, Manfred von Richthofen), but William declined, saying, “I’m not climbing into a German plane.”  Um, sure, the German’s were the enemy in WWI, but… your ancestors were German, William, and your name is only Windsor because they changed it from the previous German name (during WWI, incidentally), so take a seat; take several seats.

As far as fashion goes, Kate wore a customized coat dress in a light blue color from Alexander McQueen.  The two coats that are similar cost about $4,000, but with all the customization Kate’s must have cost much more.  Kate wore some sort of dark blue skirt underneath that is visible when she’s walking.  She accessorized with a navy Stuart Weitzman clutch (£245/~$412) that she’s carried before, and her blue suede heels she’s worn before.  By the way, and I’m not the only one who’s noticed this, why hasn’t Kate worn a New Zealand designer yet? I was expecting her to wear a NZ designer first thing and was shocked that the first dress she wore (after the initial arrival dress) was by an American designer. Anyway, Kate wore her sapphire and diamond earrings—that are supposedly Diana’s sapphires that have been repurposed for Kate.  And…. Dun dah dah dah, she wore a ponytail!  She put her hair up for an appearance, yay!  She looks so great with her hair up.  In fact, I really love Kate’s whole outfit, I think she looks great.  Her posture is terrible, though.  But overall, Kate looked good.