Post-tour updates for Will and Kate’s 3rd anniversary

Kate Middleton Prince William Royal Tour
April 29, 2014May 13, 2014 by katemiddletonreview56 Comments on Post-tour updates for Will and Kate’s 3rd anniversary

Happy 3rd anniversary to Prince William and Kate Middleton.  In honor of their 3rd anniversary, let’s do some post-tour news.  First, landing in London after the royal tour counts as an official engagement for both Will and Kate.  What?  Again, that’s crap, and I’m not counting it.  My numbers and the Court Circular’s numbers at the end of the year will be off because of their “landing/departing at airports where no one sees them” numbers inflation.  Second, Will has scheduled an appearance.  He will visit the Royal Navy Submarine Museum on May 12th.  That’s just about 2 weeks after the end of the tour.  Wow, I’m impressed.  Now if only Kate would have an appearance in May.  Third, Guy Pelly is getting married in Memphis this weekend, and William and Harry are supposedly going—but Kate is staying home, I guess.  Fourth, here are some previously unseen photos of Kate and Will playing with George on Easter Sunday.  That’s nice.  But if you’ll notice, there is at least one bodyguard with them, as well as Nanny Maria.  This makes me think even more that Kate playing with George on their day off was a stunt, because there was not a bodyguard to be found on that day.  Fifth, Will and Kate will attend a ceremony on behalf of Her Majesty to commemorate the start of World War I in Belgium on August 4th—the day Britain declared war on Germany.  There were numerous happenings between June 28, 1914—when Franz Ferdinand was assassinated—and August 4th, including several ultimatums, Russia’s mobilization, and Germany declaring war on both Russia and France.  Sixth, here is an article that is so sickly sweet it’s not even funny.  The photographer who took what he claims is Kate’s favorite photo of the tour has given many quotes on how in love Kate and William are and whatnot.  He calls her “Princess Catherine” numerous times as well.  Someone needs to explain to him how titles work in Britain.  The article is calling the photo “iconic”, which I disagree with.  It’s a sweet photo, but I don’t know if it’s “iconic”-level. Seventh, go here to have a laugh at Kate’s crazy facial expressions.

In a previous post, commentator Cathy and I were discussing the blonde woman who was seen carrying bags of clothing off the plane in Wellington.  This blonde woman is the same blonde woman who was seen carrying a clothes bag and car seat into the hospital after George was born.  Cathy and I debated whether it was Amanda Cook Tucker’s assistant (since the blonde woman is often seen near Cook Tucker) or if it was Kate’s assistant.  Well, that question has been answered by Grazia and Daily Mail.  The blonde woman is Natasha Archer—known as Tash to friends.  She is officially a Kensington Palace PA (personal assistant), but has been acting as Kate’s dresser/stylist.  She is 27 years old.  So……..  I guess it’s good that Kate seems to have a friend.  I don’t know how well this Natasha girl is at styling since most people still have a problem with Kate’s style, and it seems Archer doesn’t understand hem weights, but whatever.

Here is a Daily Mail article by Katie Nicholl.  Some highlights:

Here is a photo of the Court Circular with the BS “landing counts as an engagement” entry:

Here is the not-iconic photo Kate loves so much: 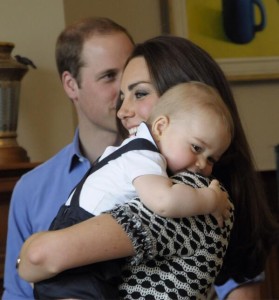