The official numbers for engagements undertaken by the British Royal Family were released.  Now, the DM posted a story about the number of days each royal (including the European royals) worked during 2013, but that was a Danish study of number of days worked, not the British compilation of number of engagements done—the royals often do multiple engagements per day because each meeting/visit is counted separately.  Each day the Palace releases the engagements done by the members of the family to the Times, and Tim O’Donovan does a compilation every year of the family’s engagements as seen in the Court Circular each day—which is where these numbers come from.

The Court Circular is on the Palace’s website now, and I counted each day Kate’s name appeared, and when I counted I only came up with 34 days, so I have no idea where the Danish study got that last day from.  As I suspected, Kate did multiple engagements on a couple of days, which is why she did 44 engagements on only 34 days of work.  The Court Circular also lists meetings and lunches that the public didn’t see.

Yikes.  The low number for this year is because she was “sick” and pregnant and didn’t want to work much, and then she had George and didn’t want to work much.  In comparison, Prince Philip—who is 92 and had exploratory surgery this year—did 180 engagements in the UK and 4 overseas.  Kate better step up her game in 2014, these numbers are just sad.

I do want to mention the Danish study of number of days worked, because the Court Circular is impressive with Charles’ 537 engagements.  BUT, that all amounts to 189 actual days of work.  He is the highest ranked royal—out of all the royals, including the European ones—but let’s compare that to the average person working Monday-Friday, who works approximately 261 (minus official holidays and any sick days taken) days a year.  Good for Charles for working the most, but that still doesn’t mean he’s anything like the hardworking public. 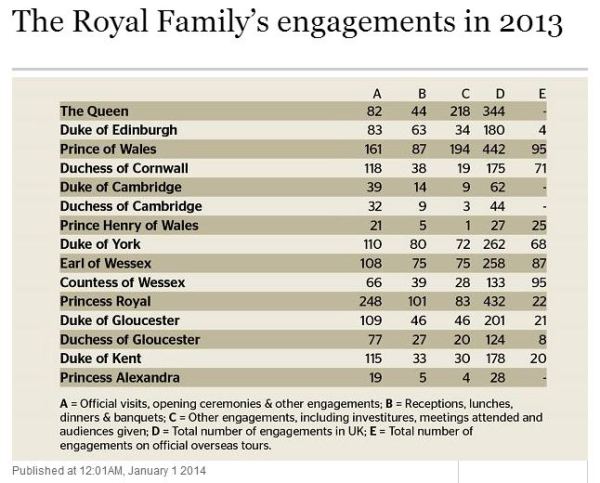 The Danish list of number of days worked in 2013: 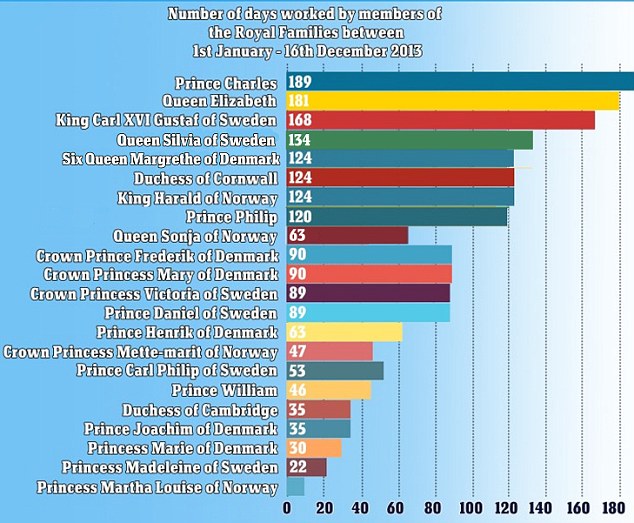 Something random I noticed when I looked Kate up in the Court Circular on the Palace’s website, she is listed below both Harry and Andrew and not next to her husband.  Odd: 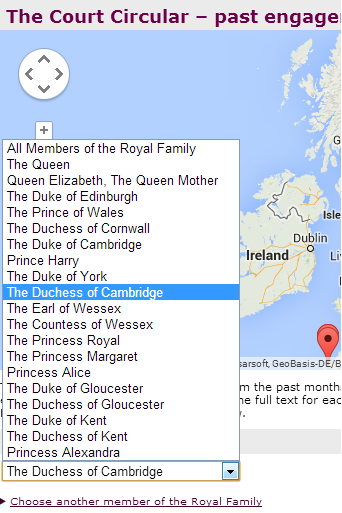