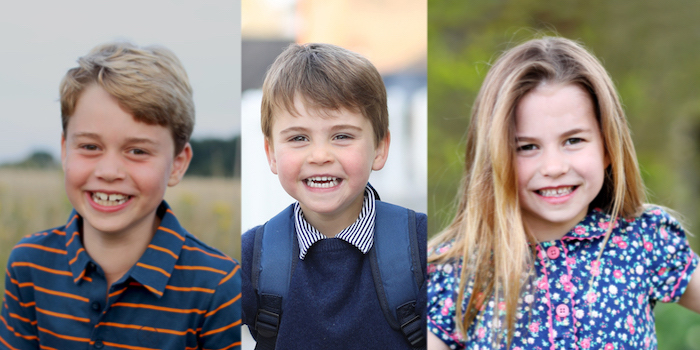 I didn’t keep up with blogging about the three Cambridge kids’ birthdays this year, so I thought I’d do an end of year wrap up featuring all of their new birthday photos released. The Duchess of Cambridge took the photos released for all three of her children this year.

First up: Prince Louis, who turned 3 years old on April 23. This photo of Louis riding his bike was taken at Kensington Palace in London in April ahead of his first day of nursery school at Willcocks Nursery School.

Princess Charlotte turned 6 years old on May 2 of this year. Her birthday photo was taken in Norfolk the weekend before it’s release.

Prince George turned a whopping 8 years old on July 22. I can’t believe he’s so old now! It doesn’t feel that long ago that we were all anxiously watching a door for a month. Anyhoodles, George’s birthday photo was taken in Norfolk in July.

These next two photos have nothing to do with birthdays, but William and Kate brought George to some football games this summer so I thought I’d drop these photos in this post also.

On June 29, William and Kate brought George to the UEFA EURO 2020 round of 16 football match between England and Germany at Wembley Stadium in London. England won 2-0.

On July 11, they attended the UEFA Euro 2020 Championship Final between Italy and England at Wembley Stadium. The teams tied 1-1, but in a penalty shoot out England lost to Italy 2-3.

KP also released a new photo of Charlotte in August as part of the Big Butterfly Count initiative in the UK. Charlotte is holding a Peacock and Red Admiral butterfly.