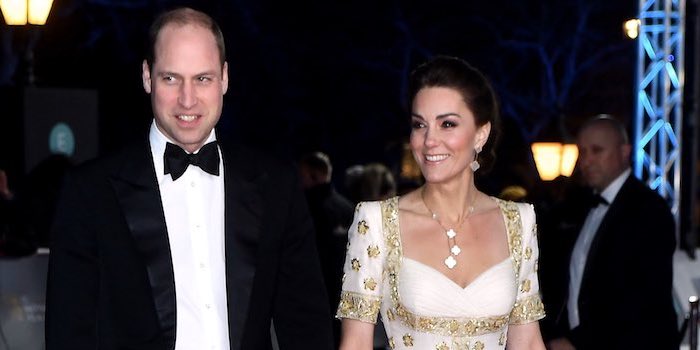 The Duchess of Cambridge brought back one of my favorite gowns for the 2020 BAFTA Awards tonight, February 2, when she attended the show with Prince William, who is President of BAFTA.

Kate wore this Alexander McQueen gold hibiscus gown for tonight’s big event, which she previously wore to the Malaysian State Dinner in 2012 during their SE Asia tour (although there have been minor adjustments to the sleeves). When I created my top 25 favorite Kate outfits in 2016, this landed at #9 because I think it is so pretty, but I said at that time that I didn’t think we’d see it again because it was so tour specific with the hibiscus design. I am happy to be proven wrong. This is beautiful enough to deserve a second outing (with a statement necklace it lacked in 2012).

The Alhambra motif is not my favorite from the brand, but it is significantly less expensive than the pieces Camilla has worn (Cams wore $138,000 earrings to the Spanish State Banquet, and that’s not all she owns from the designer).

In addition to the new jewels, Kate brought back a rather large citrine cocktail ring.

Below is a look at Kate’s updo. I point it out mostly because it’s different than Kate’s go-to matronly updo style, so good for her for branching out.

Kate’s fashion may be the only reason I care about the Cambridges showing up to the BAFTAs, but William was actually there to do a job. As President of BAFTA, he presented this year’s BAFTA Fellowship Award to Kathleen Kennedy – whose career as a producer has spanned decades; she’s produced some beloved works over the years, including Back to the Future, Jurassic Park, and the most recent Star Wars movies.

During his speech, William made a joke about how many BAFTA winners have won portraying members of the royal family, as well as calling out the lack of diversity. William said in part:

I am particularly proud to stand here tonight having served as BAFTA’s President for the last 10 years. However, I must admit I don’t know whether I should be proud, or slightly alarmed, about the number of winners over the last decade who have portrayed members of my own family.

Both here in the UK and in many countries across the world we are lucky to have incredible film makers, actors, producers, directors and technicians – men and women from all backgrounds and ethnicities enriching our lives through film.

Yet in 2020, and not for the first time in the last few years, we find ourselves talking again about the need to do more to ensure diversity in the sector and in the awards process – that simply cannot be right in this day and age!

I’m pretty sure William has made that “so many people have portrayed my family” joke before – off the top of my head I know he’s made that joke to Helen Mirren at least once.

I think it’s interesting William called out the lack of diversity in his speech. When I first read the snippet of transcript, I rolled my eyes at William calling out the BAFTAs when he mostly only does this one event for the organization each year (and he’s skipped it several times in the past decade) – he’s not in the position to call them out so publicly when he does nothing with or for them. But having watched the full speech, I don’t think William wrote that line. Well, obviously William didn’t write it, his people wrote the speech, but I don’t think his people wrote that line either. I think the BAFTAs gave him/his team that bit because William then goes on to say that the BAFTAs take the issue seriously and have launched a full investigation. He wouldn’t have said that if the BAFTAs hadn’t prompted him to.

After the ceremony, William and Kate met with the winners, including Micheal Ward, the winner of the Rising Star award.