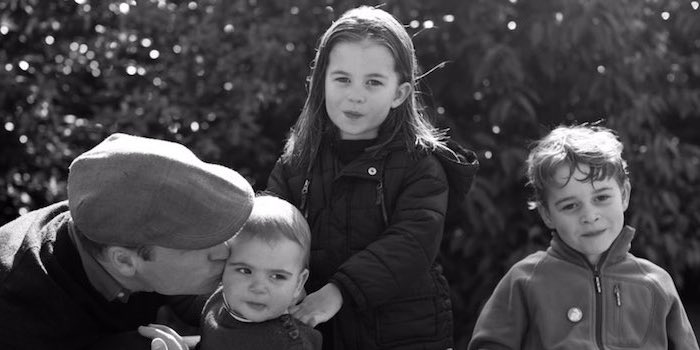 The Duke and Duchess of Cambridge released a new photo for Christmas this year of William, Prince George, Princess Charlotte, and Prince Louis. The photograph was taken by Kate, hence why she is not in the photo.

The photo was taken in Norfolk earlier this year. The Cambridges chose to go for a black and white image for Christmas this year – a first for the couple as they usually release a color image for their official photographs, Christmas or otherwise.

This photograph was released to the public, but was not the photo the couple used for their family and friends Christmas card. That photo featured all five Cambridges on a motorbike with a sidebar.

Personally, I prefer this image to the one they officially released because it’s in color.

I also have an update on the Four Generations photo op from the other day. Buckingham Palace released a short video, without sound, of the royal pudding making as well as the royals talking with the veterans. George is getting so tall!! He’s almost as tall as The Queen!