For our last year end review, let’s take a look at the British royal engagement numbers for 2017. Despite a pregnancy announcement and missing time due to pregnancy sickness, The Duchess of Cambridge‘s numbers actually weren’t that terrible (for her). She worked more days than she has any other year (if only slightly), and this is her third most productive year in terms of total engagement numbers. 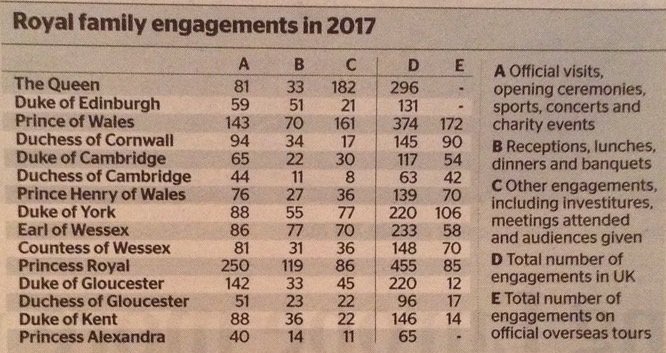 Let’s begin with a look at Tim O’Donovan’s totals for 2017. In the list below is the name of the royal, their total number of engagements for 2017, and the percentage of the total out of 3638 (percents have been rounded to the tenth).

I created a chart showing the engagement numbers done by each member of the family going back to 2011 when Kate joined, with color coding denoting year over year change. The entire royal family’s engagement totals took a nose dive in 2013, after the high of 2012 (HM’s Jubilee year). It mostly picked back up in 2014, although the total has been steadily going down the last three years. Interestingly, this is the first year that Prince Harry has publicly outworked Prince William – logging 38 more engagements in the Court Circular.

Kate’s engagement numbers for 2017 weren’t terrible for her, in that she got over 100 for the third time, but she is still next to last in totals for the BRF (only Alexandra had less than Kate this year). And sadly, Kate’s numbers will only go down in 2018 because of the birth of her third child and maternity leave. It’s nice to see Harry get over 200. William needs to pick up the slack in 2018 and get his numbers up – not only is Philip retired now, but Kate will mostly be out of action, and it’s well past time that William step up to the plate.

* Light green background indicates an increase in numbers from the previous year.

* Light orange background indicates a decrease in numbers from the previous year.

For the rest of this review of Kate’s 2017 engagement numbers, I will be using my own engagement tally – which this year, for the first time, is the same as Tim O’Donovan’s. I have kept track of Kate’s engagements throughout the year at my Appearance Total 2017 page.

Oddly enough, while it’s usually engagement totals that differ between different countings, it’s the days totals that are different between mine and the Press Association’s. They have Kate at 49 days, while I have Kate at 65. I’ve counted and recounted my list, and I have no idea why PA’s is so off. The only thing I can think of is that they used the online Court Circular on the British Monarchy’s website, which doesn’t have everything listed. Anyway, moving on.

Engagement Breakdown by Month in Days:

Engagement Breakdown by Month in Engagements:

As of 2017, Kate has a total of 16 patronages. This year, she visited 11 out of 16 of them for a total of 26 visits. Of her 105 total engagements this year, 24.76% of them were to her patronages. The Royal Foundation was the most visited, with 11 engagements – mainly because all of those Heads Together events were as Patron of The Royal Foundation.

* According to The Times Court Circular, Kate’s visits to Wimbledon counted for both her patronages of the AELTC and the LTA, so technically she visited the LTA three times this year. However, there was only one visit to them that was solely to them and actually promoted as a visit to them.

I created a handy little chart here for Kate’s patronages, listing how many times Kate visited each patronage, what her total number of visits was, and how many patronages she visited each year out of how many she has. 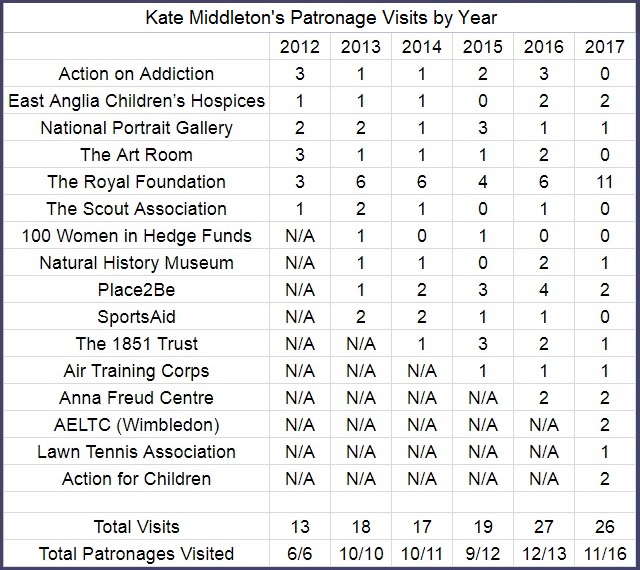 * Numbers only include what was counted in the Court Circular; private visits are not counted.

* Numbers do not include video messages, letters, etc.

* Keep in mind counting engagements is not a science, these number could be off.