Kate Middleton is back into the swing of royal duties after taking time off to announce her third pregnancy. Yesterday, October 31, Kate visited the National Tennis Centre as Patron of the Lawn Tennis Association (LTA) – this was her first appearance as Patron of LTA. 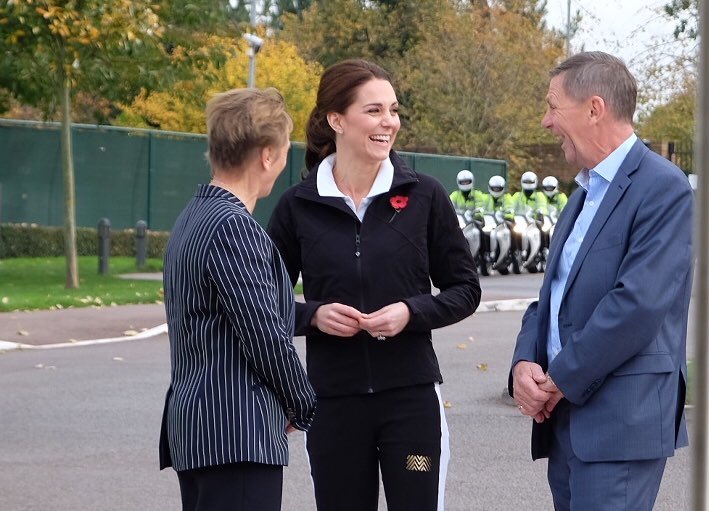 Upon arrival at the National Tennis Centre, Kate had a sit down chat to learn more about their work.

The Lawn Tennis Association‘s (LTA) mission is to get more people playing tennis more often, and part of its role is to govern tennis in Great Britain, Channel Islands and the Isle of Man by acting as guardians to promote and safeguard the integrity of the sport.

“It was good and fun. She’s lovely. It was great to see her passion for tennis and that she was here to learn about these great programs being run by the LTA. Every little girl and almost every boy wants to meet a princess and it got them very excited.”

Kate then met Alfie Hewett – a two time Paralympic medalist and Wimbledon and US Open Wheelchair Doubles Champion – who gave a demonstration of his Wheelchair Tennis skills.

Kate then met some of the UK’s top junior tennis talents and their support teams to learn what it takes to become a tennis champion.

Kate then took part in a Coach Core training session delivered by Coach Core apprentices. Coach Core was founded in 2012 by The Royal Foundation and trains young people age 16-24 to become coaches.

As a parting gift, Kate received flowers and posed for a photo with the kids.

Sam Richardson, a coach with the association, told People that Kate asked about tennis tips for Prince George: “[Kate] says with George just being 4 he wants to whack a ball. So, she was asking what sort of stuff should be doing. She said he’s interested in it but more in whacking the ball.”

For fashion, Kate went sporty, of course. She brought back her $345 Monreal London Black Tuxedo Track Pant she debuted at a tennis engagement in 2016. She teamed the pants with a new £129 PlayBrave Clarice Track Jacket, and new $190 Nike Air Vapormax Flyknit Running Shoes. Kate also brought back her Kiki McDonough Grace earrings and wore a poppy pin.

I’m not going to lie, I honestly thought Kate would opt out of getting involved with the tennis sessions citing her pregnancy, so it was a nice surprise to see her actually get involved. I know some of you disliked the idea that Harry should have gotten involved at the Danish pastry shop, but to be honest, getting involved makes for better photos and video. Shots of the royals just standing around and chatting are pretty boring, especially when there is no good quote from the royal either. So I’m really happy that Kate got involved with the tennis at this engagement.

KP announced new engagements for Kate for next week:

Tuesday, November 7, Kate will attend the 2017 Gala Dinner for the Anna Freud Centre at The Orangery at Kensington Palace.

Catherine Quinn accompanied Kate to this engagement. I already like her style way better than Rebecca Deacon’s.