Prince William and Prince Harry, along with Kate Middleton, visited the White Garden at Kensington Palace yesterday, August 30, to honor the memory of Princess Diana on the eve of the 20th anniversary of her death.

The royal trio, who were battling the weather, toured the White Garden where they met with gardeners Sean Harkin, who designed the display, and Graham Dillamore, who knew Diana during her life.

“Admiring the new layout, which she said was less formal than previous designs, the Duchess said: ‘It does look really different, I love the semi wildness.’

“When the summer opening of the White Garden is over, Prince Harry told staff he would like to keep some of the plants and flowers alive, transporting them to his own, small, Kensington Palace plot to tend them…

“Mr Harkin said: ‘They remembered going into the garden as children and feeding the fish, and they were happy to hear some of the fish are still the same. They were very interested in hearing about the flowers. Prince Harry is quite green-fingered himself and asked lots of questions about what we were growing.'”

The White Garden at Kensington Palace was planted with flowers and foliage inspired by memories of Diana’s life, image, and style. The plants include an elegant palette of tulips and scented narcisii through a carpet of ‘forget me nots’, as well as pots of classic English white roses surrounding the reflective pool in the center, and glowing ornamental grasses weaving through Cosmos daisies and billows of graceful Gaura.

The royal trio then met with representatives from the charities Diana was patron of at the time of her death: Centrepoint, Great Ormond Street Hospital, The Leprosy Mission, National AIDS Trust, The Royal Marsden, and English National Ballet. Also invited were two charites Diana was close to, although not officially patron of: Child Bereavement UK, and Landmine Survivors Network.

“English National Ballet director Tamara Rojo told them many popular productions were only staged because of the fundraising Princess Diana had done in her lifetime, adding: ‘That’s something we celebrate.’

“William said: ‘We’ve got plenty of pictures. I remember her showing me ballet shoes she had been given [by ENB] and she was so proud of them. She loved dancing, she was a fantastic dancer. We’ve been going through her music collection recently and there’s some quite eclectic stuff in there. She was elated by the skill.’

“The Duchess said that Princess Charlotte is now learning to dance, adding: ‘She absolutely loves it.'” 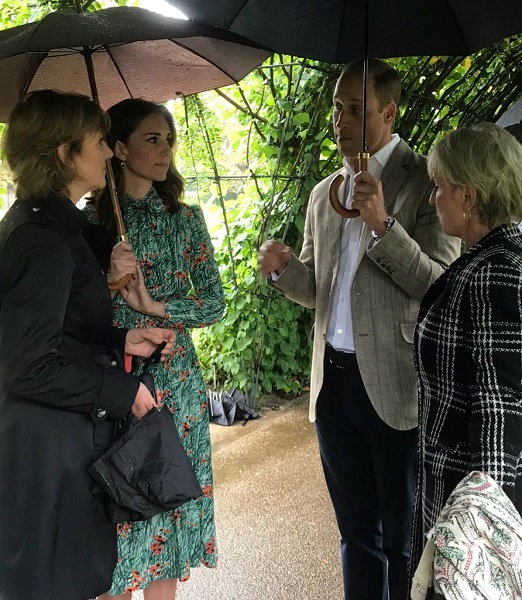 After spending an hour touring the Garden and meeting with the charities, William and Harry moved to the Gates of KP which have been decorated by the public in memory of the anniversary. They also did a little walkabout with some of the public who had gathered outside of the gates.

“Rhian Oxby, 40, and her two children Masie, ten and Gracie, eight, waited patiently for over an hour for the Princes to come outside. Maisie said: ‘I gave flowers to Prince Harry, he put the flowers in the middle at the gate, I felt so excited I was shaking.'”

Kate wore a new dress for the garden viewing. She chose a Prada Poppy Print Silk Dress ($2,340) which looks like scribbles to me. She paired the dress with her Monica Vinader green onyx siren earrings, and her LK Bennett Ferns.

Reader MrsBBV sent me some lovely photos of the White Garden that her husband took. I’ve posted some of my favorites below. You can see a full album of the photos at my Facebook page here. Thank you so much, MrsBBV, for sending me these and allowing me to post them!