Kate Middleton paid an unannounced visit to King’s College NHS on Monday, June 12, to visit those affected by the London Bridge and Borough Market attack – victims and doctors, nurses, and support staff.

Kate met with the medical staff who worked on the night of the attack, before meeting privately with the survivors.

“Kate called NHS staff ‘remarkable’ as she became the latest member of the Royal Family to meet with survivors during a surprise lunchtime visit to the south-east London hospital. In a cruel twist, many of the staff who tended to patients after the London Bridge atrocity were also working on March 22 when Khalid Masood killed five people in an attack on Westminster Bridge. Kate remarked: ‘To go through this sort of event twice, it is quite unprecedented.'” 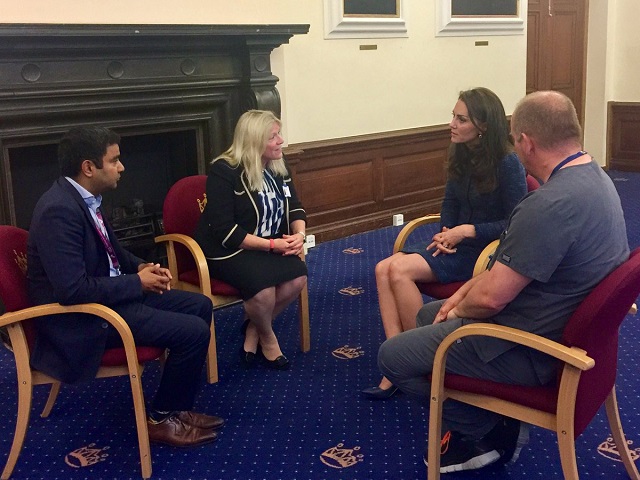 Kate then sat down with staff to talk about PTSD and trauma, and how important psychological support is for patients and staff.

More from the Daily Mail:

“Before she left, the royal met with other senior hospital officials including Dr Tunnicliff, who spoke to her about the psychological support which has been made available to staff and patients following the attacks… The issue of mental health is an important part of William, Kate and Harry’s public work.

“‘Can and should you talk to patients who have gone through something like this?’ she asked. ‘There they are in hospital one day and then find themselves back at home. Is it best to guide them?’

“The Duchess also asked whether PTSD is common among patients who have gone through such a traumatic experience. She was told that everyone was offered help and support both while in hospital and in the weeks and months ahead.

“‘It’s hard to know who will get PTSD and who won’t,’ one staff member said. ‘The important thing is to help themselves and their families recognise the signs and know where to get help.'”

Afterward, Dr. Tunnicliff spoke to reporters about how the gender breakdown of the stabbing victims had deeply affected the hospital staff, saying:

“We are one of the busiest hospitals in western Europe in terms of dealing with stabbing incidents. But it was the volume in such a short space of time. We went through a week’s worth of kit in just an hour and a half. And while we were are quite used to dealing with young men that stab each other, this time there were quite a lot of ladies who had suffered serious, multiple injuries. That was quite shocking to many. The Duchess was surprised to hear that.”

Kate wore her Rebecca Taylor blue sparkle tweed separates (the original, not the duplicate she debuted in February), and her Manolo Blahnik “Calogera” navy pumps (as far as I am aware, this is only their second outing after she wore them at the airport leaving for Canada in 2011). Kate also wore her Sapphire and Diamond Earrings. She did not carry a clutch.

Additionally, Kensington Palace announced an engagement for Kate on June 16 – she will visit 1851 Trust at their final Land Rover BAR Roadshow – and the dates for the Poland/Germany tour – Kate and William will visit Poland and Germany from July 17-21, visiting Warsaw, Gdansk, Berlin, Heidelberg, and Hamburg.