As part of the Heads Together campaign, Prince William has given an interview and done a photo shoot with GQ Magazine about mental health. William spoke with GQ’s Alastair Campbell, who is also a mental health campaigner, about Princess Diana, mental health, and the ultimate goal of Heads Together. In April, William, Kate Middleton, Prince George, and Princess Charlotte were photographed at Kensington Palace for the magazine. 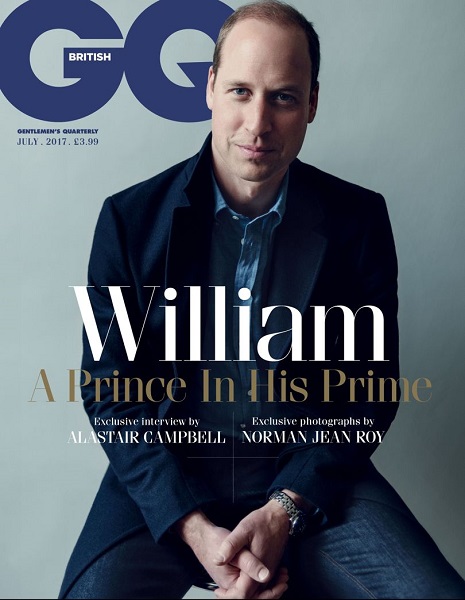 GQ has released a preview of the interview, which can be read in full in the July 2017 issue of British GQ, out June 1.

“I would like to have had her advice. I would love her to have met Catherine and to have seen the children grow up. It makes me sad that she won’t, that they will never know her.”

William on the ultimate goal of Heads Together:

“Smashing the taboo is our biggest aim. We cannot go anywhere much until that is done. People can’t access services till they feel less ashamed, so we must tackle the taboo, the stigma, for goodness sake, this is the 21st century.

“I’ve been really shocked how many people live in fear and in silence because of their mental illness. I just don’t understand it. I know I come across as quite reserved and shy, I don’t always have my emotions brewing, but behind closed doors I think about the issues, I get very passionate about things. I rely on people around me for opinions, and I am a great believer in communication on these issues.

“I cannot understand how families, even behind closed doors, still find it so hard to talk about it. I am shocked we are so worried about saying anything about the true feelings we have. Because mental illness is inside our heads, invisible, it means others tread so carefully, and people don’t know what to say, whereas if you have a broken leg in plaster, everyone knows what to say.”

William on the 20th anniversary of Diana’s death:

“I am in a better place about it than I have been for a long time, where I can talk about her more openly, talk about her more honestly, and I can remember her better, and publicly talk about her better. It has taken me almost 20 years to get to that stage. I still find it difficult now because at the time it was so raw. And also it is not like most people’s grief, because everyone else knows about it, everyone knows the story, everyone knows her. It is a different situation for most people who lose someone they love, it can be hidden away or they can choose if they want to share their story.”

William on the importance of family:

“I could not do my job without the stability of the family. Stability at home is so important to me. I want to bring up my children in a happy, stable, secure world and that is so important to both of us as parents. I want George to grow up in a real, living environment, I don’t want him growing up behind palace walls, he has to be out there. The media make it harder but I will fight for them to have a normal life.”

Below is a photo of the Cambridge family taken in April in the garden of their KP home. Lupo even got to be included! 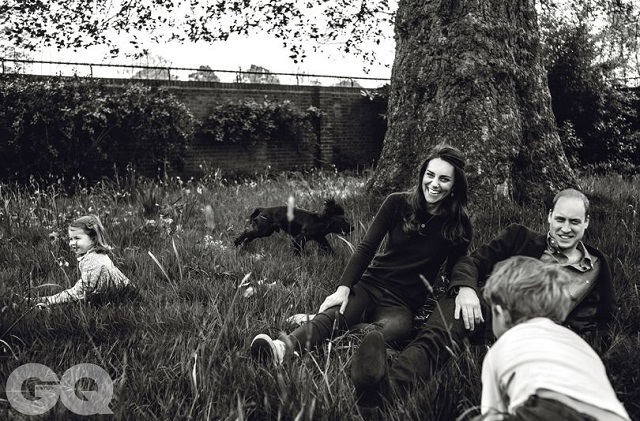