Princess Charlotte celebrates her 2nd birthday tomorrow, May 2, and to mark the occasion, KP has released a new photo of the youngest British royal. 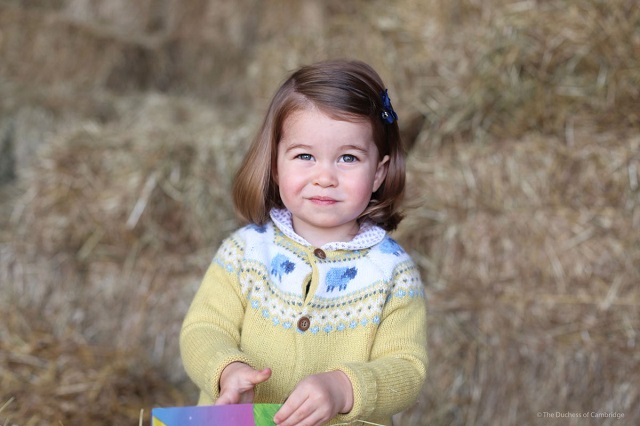 [HRH The Duchess of Cambridge]

The photograph, take by Kate Middleton in April at Anmer Hall, features Charlotte in a yellow (yay a new color!) sweater with blue sheep on it, and a blue bow in her hair. She’s holding something colorful (a kite?) and positioned in a sea of hay. She’s not smiling; instead giving a “you want me to do what now?” smirk.

I love the expression, although hay is a pretty drab background choice.

KP wrote on twitter: “The Duke and Duchess are delighted to share a new photograph of Princess Charlotte to mark her second birthday tomorrow ? TRH would like to thank everyone for the lovely messages they have received & hope that everyone enjoys this photograph as much as they do.”

I’m a bit bummed there is only one photo. They only released one photo for George’s 2nd birthday as well, but we had just seen him at Charlotte’s Christening earlier that month so it was okay. But we haven’t seen Charlotte since Christmas, so it would have been nice to get more than one photo. But I guess we’re going to see her at Pippa’s wedding later this month, so only one photo now is okay? Sure. Anyway, I’m glad they released a photo.

I wasn’t expecting this today (I was expecting it tomorrow), so today is a two day post – go here to see Queen Letizia looking amazing at King Willem-Alexander’s 50th birthday.

Here is a 1931 portrait of QEII (also not smiling). Charlotte definitely looks like a young QEII.