Fashion Jewelry Kate Middleton
May 4, 2017May 4, 2017 by katemiddletonreview138 Comments on Kate feeds lamb on visit to farm

On May 3, Kate Middleton visited Farms for City Children, a charity that offers urban children from all over the UK an opportunity to live and work together for a week at a time on a real farm in the heart of the countryside. Kate spent time with the kids and animals, and revealed that she’s teaching Prince George and Princess Charlotte Spanish. 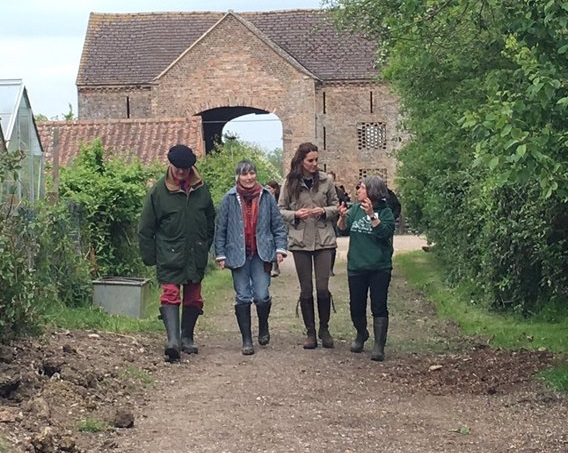 Kate began her day with a briefing about the farm from founders Michael and Clare Morpurgo, before joining a story time session with Year 5 students from Vauxhall Primary School. Kate then helped plant onions at Wick Court, one of the charity’s three farms.

Then it was animal time. Kate fed a baby lamb named Stinky, and helped herd pigs. 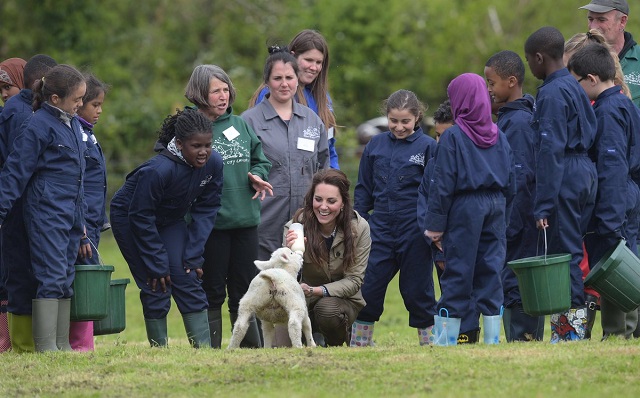 Stockman Dave Evansoneya, 50, revealed Kate has chickens, saying: “She has got several Cuckoo Marans at home, she told me. She says she had cleaned out a few chicken sheds in her time. She also told me and the children that she has an incubator of eggs at home at the moment with a hope that they are going to hatch into chicks. Her children are very excited.”

More about Kate’s chickens from a student and her teacher:

“Rehanna, 10, chatted to the duchess at length and said afterwards: ‘She said she had lots of animals at home, a dog, a hamster, a lamb and her chickens. She said she also had lots of eggs in an incubator and they were hoping they would hatch into chicks.’

“Her teacher Nicole Preston explained: ‘The incubator is relatively new and she doesn’t know if it is going to work. She says it takes 21 days but George and Charlotte are so excited that they come down each morning and peer inside to see if anything has happened!’

“Reehanna added: ‘She told us about her chickens and the sounds they made and said they were quite noisy. She says she has loads of animals at home.'”

Another teacher, Natalie Graham, revealed Kate told the kids about Charlotte’s birthday after the kids had given her a birthday card they had made and a toy Paddington Bear: “She told them that they had a little party for Charlotte yesterday and she sung Happy Birthday to herself! It was so sweet. She loved the card and present and said Charlotte would love it too as the card had Peppa Pig on, which she loves.'”

Apparently it was Kate who asked to come on the visit. According to a spokesman for the charity, whose patron is Princess Anne, Kate read about its work in Country Life and approached them to see if she could come down to one of its farms.

Thoughts on the quotes? I’m eh on all the animal stuff, but the Spanish thing stuck out to me. I could totally see Nanny Maria teaching George and Charlotte Spanish, but I can’t see Kate doing that. If anyone is going to teach those kids Spanish it would be the Spanish nanny.

Kate dressed down for the farm, opting for her Troy London parka she wore in Canada, her Zara biker trousers she wore in India, a new J. Crew sweater, a Gap shirt from Canada, her Penelope Chivers boots, Kiki McDonough Lauren Leaf earrings, and Cartier watch.

138 thoughts on “Kate feeds lamb on visit to farm”