Kate joins Queen for first Garden Party of the year

Well this was a nice surprise. Kate Middleton turned up for the Queen‘s first Buckingham Palace Garden Party of the year yesterday, May 16. Prince William was also there – it’s his second BP garden party ever.

Joining The Queen yesterday were Prince Philip, William and Kate, Princess Beatrice, Prince Edward, and Princess Anne. Prince and Princess Michael of Kent were also there.

Kate chose a repeat, which she often does for these garden parties. Kate’s silk satin ice blue Christopher Kane coat was previously worn to the 2012 Olympics Opening Ceremony and the 2014 Order of the Garter ceremony. Kate once again wore her Lock and Company “Sweet Delight” hat. She also wore her Gianvito Rossi nude suede pumps, and her Kiki McDonough Blue Topaz Drop Earrings she debuted in Luxembourg made a reappearance.

Kate carried a new clutch which looks to have a floral design on a cream background. I’m a bit disappointed there aren’t better photos of her clutch since it looks like one of the more whimsical pieces she owns. 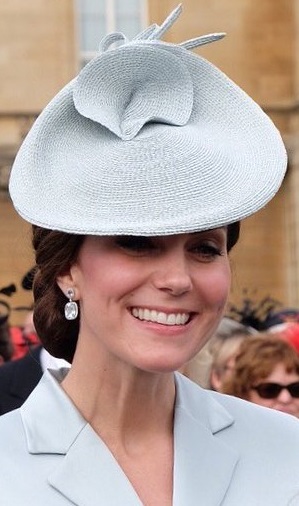 While chatting to guests, Kate mentioned being excited about Pippa’s wedding this weekend, and how Kate hopes George and Charlotte behave themselves.

“Kate chatted to Andrew Bates and his wife, Janet, about her sister Pippa’s wedding at the weekend – and revealed that while she was hugely looking forward to it, she was slightly nervous about how her children, Prince George, three, and two-year-old Princess Charlotte would behave as well.

“Mr Bates. 55, from Coventry said: ‘She said that they were all really looking forward to her sister’s wedding at the weekend but she was a bit worried about how her children might behave. She said she was hopeful that they would be good but you never know at that age.’

“Prince George, three, will be a page boy and Princess Charlotte, two, a bridesmaid for their aunty on Saturday.

“Mr Bates was invited to the garden party as he has worked on the sound for the Queen’s speech and other major royal events for the past 28 years. ‘She was really interested in that, particularly when I explained that I had never been to Buckingham Place outside of work. The Duchess wondered how it felt to be on the other side of the fence,’ he said.” 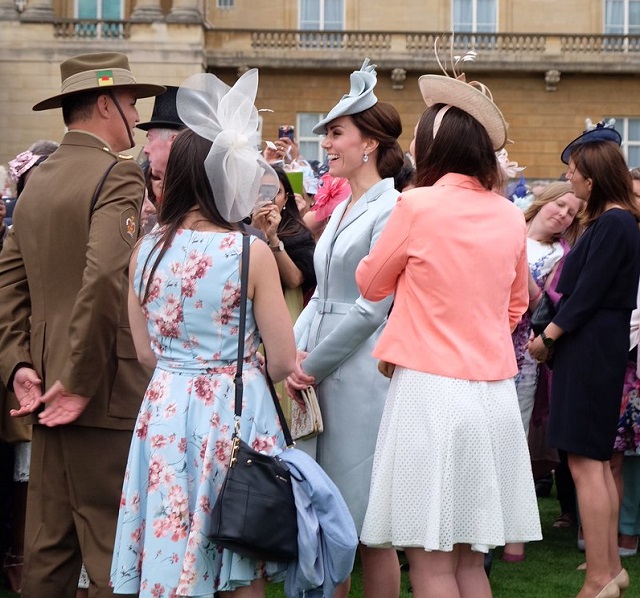 In the below video, you can hear William speaking to two women from Norway. He asks where they are from and then says: “Hopefully we are going to go to Norway very soon. We’re going to do a Scandinavia-“ And the end of his sentence is cut off when the video cuts away.

Every summer, The Queen hosts three Garden Parties at Buckingham Palace, and one at the Palace of Holyroodhouse in Scotland. Historically, Garden Parties took the place of presentation parties attended by debutantes, and have evolved into a way of recognizing and rewarding public service. Over the course of the year, over 30,000 guests attend the garden parties. At each Garden Party, around 27,000 cups of tea, 20,000 sandwiches and 20,000 slices of cake are consumed. 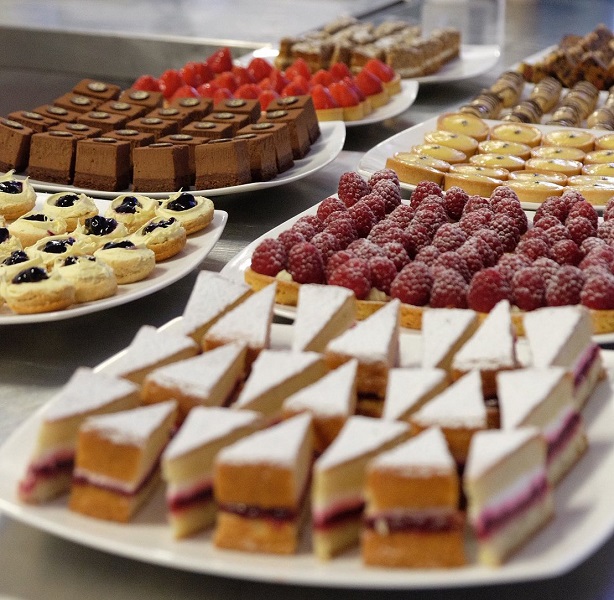 The Queen wore a soft pink coat and hat and the Centenary Rose Brooch.

I think Beatrice is theming it sailor style with the navy dress with white piping and the navy and white hat. Her dress is the Tory Burch Winston Dress which, on it’s own, is cute, but with the hat is too much for me.